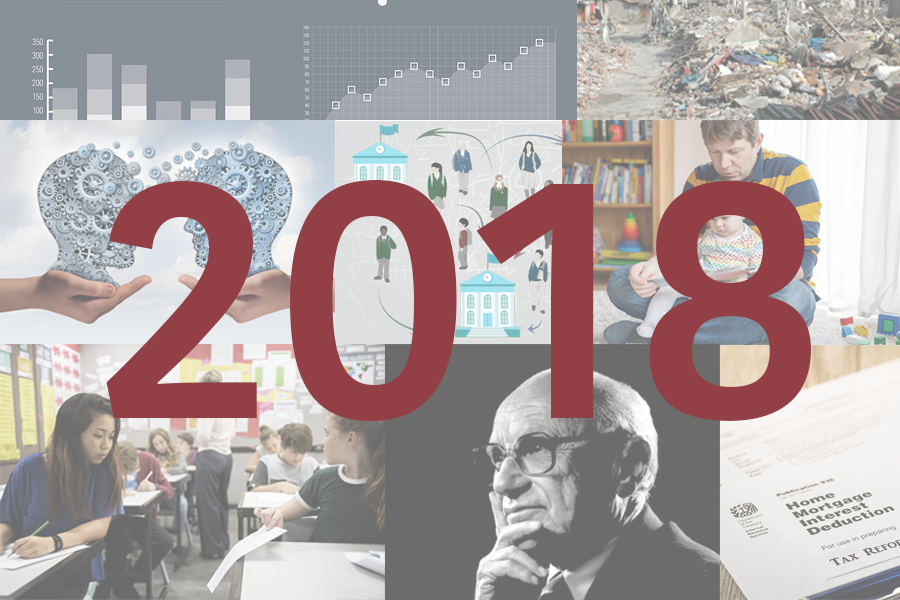 The Research Highlight series provides an overview of current economics research, focusing on why it is interesting and relevant to our everyday lives. The top ten highlights of 2018 cover everything from parenting norms to global inequality. Several address what economists can do to improve their research — either through communicating data effectively or making their research transparent. You can listen to, watch, and read the best research highlights of 2018 below. And, you can check out more on our website.

“My belief is that we as economists — but really social scientists, scientists in general, people working with data and data-rich content — don't do a great job of thinking about the communication of that work to our audience, be it a reader in a report or a reader on a website or a user of a data tool or interactive. We tend not to think about the user or the reader often enough.” – Jonathan Schwabish

The 1995 policy reform in Sweden earmarked one month of paid leave — the so-called “daddy month” — to each parent and restricted the ability to transfer those days to one spouse or the other. Facing the option to “use it or lose it,” fathers took up the paid leave at a much greater rate than before. And yet, it added tension in some families.

3. Does a tradeoff between inflation and unemployment exist?

Today, most economists agree that there is no long-run conflict between price stability and full employment, but the short-run relationship between the two policy goals hinges on how these concepts are defined.

4. What's best for the baby

“There's a lot of interest today among both researchers and policymakers in understanding the trends and growth in inequality and intergenerational transmission of socio-economic status both in the US and around the world. What we think we can contribute to that discussion is that we're pointing out one channel through which disparities in early life, and experiences during pregnancy even, can perpetuate disadvantages across generations.” – Maya Rossin-Slater

“There's been increasing evidence really across the social sciences, and economics is no exception, that publication bias is a real concern. The kind of evidence that we see published in our journals may not always be representative of the underlying data and findings.” – Ted Miguel

6. Designing theories for the real world

“What we've been working on in market design is a very practical engineering-oriented approach to economics. . . . We've gotten our hands dirty in the field. In many cases, things that we think are theoretically important turn out not to be. And we only learn that by interacting with things in the field and working alongside people who look at data, people who run experiments.” – Parag Pathak

If you give high school students cash incentives to perform well on exams, their scores will increase. Of course, these higher grades have two possible explanations: increased learning or increased cheating. The first was the goal of Aligning Learning Incentives (ALI), an experiment designed to encourage student learning throughout high schools in Mexico. It worked, but the second explanation played a role, too.

8. Is a globalized world a less equal world?

A common narrative frames globalization as the cause of inequality: by shifting low-skilled jobs from wealthier countries to poorer countries, economic integration has increased inequality within countries while lowering inequality between them. However, the story is more complex.

Is a globalized world a less equal world?

9. Scrapping a subsidy to homeowners

Critics say the mortgage interest deduction is a regressive tax policy that inflates prices and encourages buyers to choose more expensive houses and take on debt rather than sinking money into other investments. It also robs the Treasury of tax revenue that could be used to close the deficit. But real estate lobbyists say its repeal would depress homeownership and negatively impact social welfare.

Integrating psychology and economics has led to some of today’s most important insights into human behavior. Now, social neuroscience and economics have a similar chance to learn from one another. If they do, their shared field is sure to benefit both disciplines and help us to better understand our economic and neuroscientific worlds.