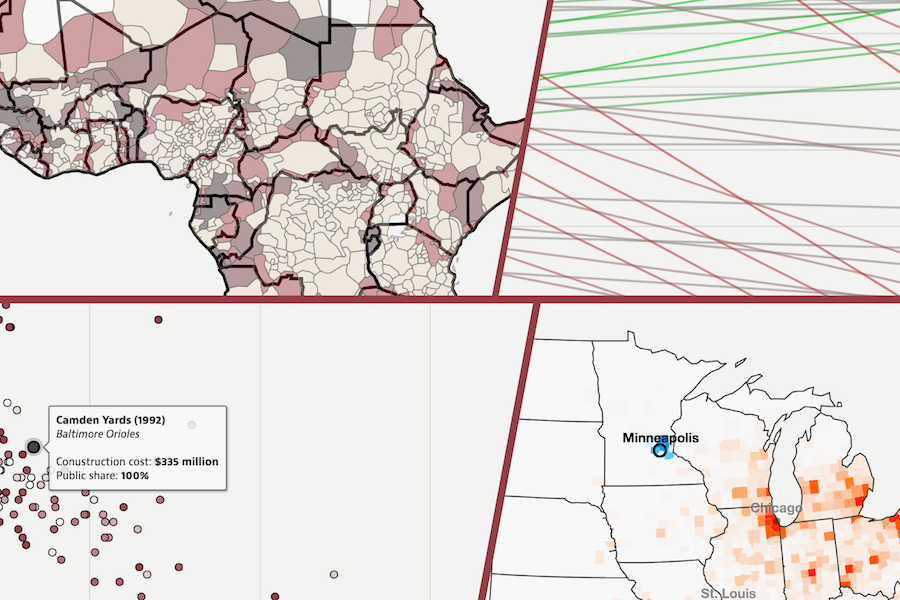 We have published over 100 graphics, data visualizations, and interactive features as part of our Research Highlight series to help spread the word about great economics research appearing in our journals. Below is a sampling of staff favorites from the past year.

Colonial-era borders in Africa: In The Long-Run Effects of the Scramble for Africa, authors Stelios Michalopoulos and Elias Papaioannou assessed the consequences of modern-day borders that partition ethnic homelands.

Present-day borders in Africa split many ethnic homelands
The map of African ethnolinguistic divisions created by American anthropologist George Peter Murdock in 1959, overlaid with a map of present-day national borders. The Murdock map is based on primary sources and is meant to represent the location of ethnic homelands during the period from 1890–1910. The authors identify 28% of Murdock's 843 regions that are significantly partitioned by present-day borders.
Source: adapted from Figure 1 of Michalopoulos & Papaioannou (2016)

Beyond GDP: In Beyond GDP? Welfare across Countries and Time, authors Charles Jones and Peter Klenow create an alternative measure of GDP that accounts for factors like inequality and life expectancy.

Global inequality may be worse than the GDP statistics suggest
2007 GDP per capita (left) and the authors' welfare measure (right) for 140 countries, both relative to the United States. Countries in Europe, especially eastern Europe, come out ahead thanks to high rates of leisure, longer life expectancies, and lower inequality. Oil-rich countries are penalized for low rates of consumption and high levels of inequality, while lower life expectancies hold back welfare in the AIDS-ravaged countries of southern Africa.
Source: author-supplied data from Jones and Klenow (2016)

Read more: What are the GDP data hiding?

The environmental impact of electric cars: In Are There Environmental Benefits from Driving Electric Vehicles? The Importance of Local Factors, authors Stephen Holland, Erin Mansur, Nicholas Muller, and Andrew Yates calculate the local and nationwide impact of driving an electric car in different U.S. cities.

How neighborly is your city's electric car fleet?
Replacing a gas-powered car with an electric model takes a lot of emissions out of the air in the local area over the car's lifetime, and adds some emissions at power plants far away. In some cases, a single electric car can do hundreds of dollars of environmental damage to a distant county over its lifetime by increasing pollutants like NOx, SO2, and particulate matter. Click on each city to see the county-level environmental benefits (and costs) of choosing an electric Ford Focus over a conventional one and driving it for 150k miles.
Note: in some counties, damages and benefits range well above $100.
Source: adapted from supplemental maps in the online appendix to Holland et al. (2016)

Read more: Are subsidies for electric cars good for the environment?

Stadium subsidy economics: In The Economics of Sports Facilities and Their Communities, authors John Siegfried and Andrew Zimbalist make the case that public subsidies for stadiums are seldom justified by the economic benefits.

A century of ballparks
Data on construction costs and public financing for over 150 major North American stadiums and arenas, from Shibe Park and Forbes Field (1909) to Levi's Stadium (2014). Circles are shaded more darkly for stadiums that received more public funding. Dollar figures are adjusted for inflation to their modern-day equivalents.
Source: Komisarchik and Fenn (2010, 2016), Keating (1999), FRED database
Read more: Will cities ever break the habit of paying for stadiums?

One year of Research Highlights