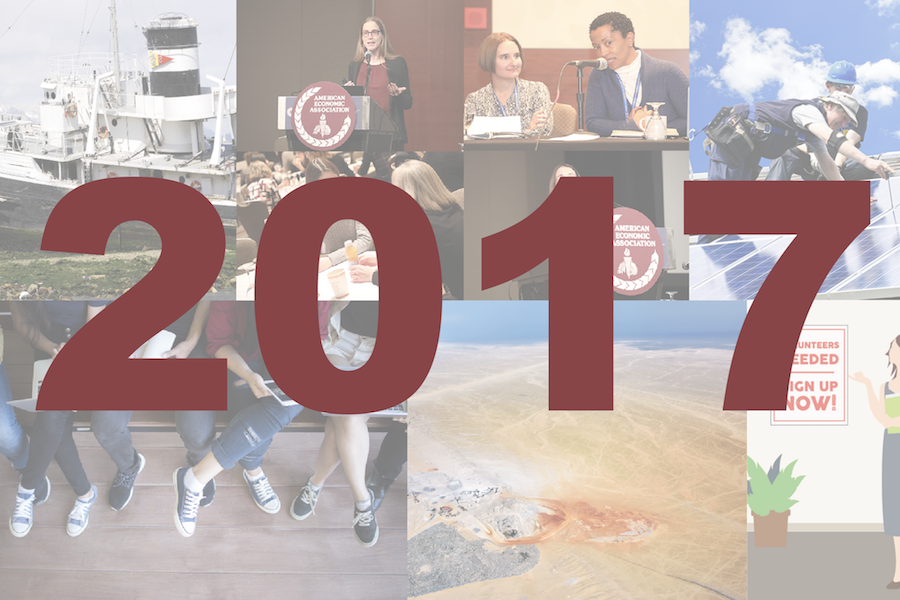 The top ten research highlights of 2017 included audio interviews, a video, and articles covering a wide variety of topics.

The Research Highlight series provides an overview of current economics research, focusing on why it is interesting and relevant to our everyday lives. The top ten highlights* of 2017 cover everything from online education to historical trade. Several address themes of gender and education — both as they relate to the economics profession and more broadly. You can listen to, watch, and read the best research highlights of 2017 below. And, you can check out more on our website.
*Calculated as the number of page views each research highlight published during 2017 has received.

1. The gender gap in economics

It's not just a matter of fairness. There's efficiency, and so the diversity of individuals within a group affects the productivity of that group. The lack of diversity in our profession likely hampers our whole discipline, constraining the range of issues that we address and limiting our collective ability to understand familiar issues from new perspectives.

We are surrounded by information, but we often choose to ignore it — even when it’s free and accurate. David Hagmann, Russell Golman, and George Loewenstein explore this phenomenon in our audio interview I don’t want to know.

And now the mood had become much much more grim because, as you said, it seems like instead of using the Internet to expose themselves to a variety of perspectives, people mainly use the Internet to kind of personalize the news to hear more about what they want to hear about and what they already believe. So, as you say, the Internet has become a kind of echo chamber and it's also become a conduit for fake news. And this has something to do with hedonics. People seem to care as much about how reading a news story will make them feel as they care about whether the news story is (true) or not.

Colleges accept students based on their skills, and employers choose employees based on their colleges’ reputations. Our video The Big Sort describes this process and how, as researchers Bentley MacLeod, Evan Riehl, Juan Saavedra, and Miguel Urquiola found, it affects people over the course of their careers.

[S]omeone who goes to an elite college is likely not just to have a better starting wage, but their earnings may also grow faster than their peers who graduated from a state school. It’s not certain whether reputation is the factor causing this wage growth.  But the findings still should give policymakers pause as they work to expand college opportunities to more people.

4. The downsides of virtual learning

Students in online courses had lower grades, did not earn as many credits, and were more likely to drop out of college than similar students taking those courses in person. Even though the two versions — which used the same grading rubrics and delivered the same content — were nearly identical, students in the in-person class earned a B- on average, whereas students taking the course online earned a C.

5. A long-term investment in education

Educational spending has real consequences for students, as reported in A long-term investment in education. Researcher Joshua Hyman explains that increases in spending lead to greater college enrollment and graduation, but this may not be true for everyone.

Policymakers shouldn’t assume, however, that they can throw money at schools and get the results they want. Some districts benefit more than others, Hyman said, and they may not be the ones that policymakers are most worried about. Students in wealthier urban and suburban districts had the biggest boost to college going. Meanwhile, spending increases had barely any impact on students in rural high-poverty districts.

A long-term investment in education

Is globalization good? describes researcher Luigi Pascali’s work on how the steamship spurred the first wave of globalization, ultimately contributing to global inequality.

As some countries reaped the benefits of globalization, others fell behind. "In the past, at least in the short run, a big wave of globalization ended up with some losers, who appear to be concentrated among the poor and among those with bad institutions," Pascali says. This gap between "winners" and "losers" spurred an economic divergence between rich and poor countries that persisted for decades. Although it may not explain today’s economic divides, this historical period can still shed light on how globalization may contribute to global inequality.

7. A "dark side" to the commodity boom in Africa

Researchers Nicolas Berman, Mathieu Couttenier, Dominic Rohner, and Mathias Thoenig show how Africa’s commodity boom led to increased violence in mining areas, as explained in A “dark side” to the commodity boom in Africa.

The researchers trace the actions of hundreds of rebel groups active between 1997 and 2010, including some that won battles or captured territory in mineral-rich cells. They find that when a rebel group succeeds in capturing a lucrative mining area, violence is more likely to occur for several years afterward, with effects on cells as far as 1,000 km away. By one rough measure, a group’s capture of a mining area triples the number of violent events that can be expected from that group in the next year.

8. An interview with Dave Donaldson

Dave Donaldson was the 2017 John Bates Clark medalist. He talks about his reaction to winning, how he became interested in economics, and his advice for young economists in our audio interview An interview with Dave Donaldson.

I got kind of hooked on the idea that economics was the physics of the social sciences, or physics for public policy questions is a better way of putting it. That is, using theory and data and scientific method to come up with clear answers to questions to those policy questions that were on the front pages and were in the hearts and minds of students around the world in the late 90s about globalization.

Women are more likely than men to take on work tasks with no reward, such as cleaning out the refrigerator or organizing an office party. In our audio interview Women’s work?, researchers Lise Vesterlund, Linda Babcock, Maria Recalde, and Laurie Weingart talk about their experiences with thankless tasks and how this phenomenon affects women.

I think what we show in the paper is that we are expected to perform these tasks and often asked to do them. Unless we break this cycle, it's in our best interests to step up to the plate because otherwise we may fail to do the task entirely as an organization. So, all we need is almost good bosses or a way to allocate tasks in a fair manner, which may be very simple in an organization because you could just think about a random way to allocate or ask people to do these tasks.

10. What should we do about climate change?

Economists have been studying climate change for decades. What should we do about climate change? covers Geoffrey Heal’s overview of the economics research on climate change, its consequences, and its potential solutions.

Heal’s survey makes one thing clear: economists are essential players in the national conversation about climate change, and they will continue to have this role as long as climate change continues to threaten the global economy. Economists help to inform policymakers and the public about the costs and benefits of mitigation. They frame climate change as a risk — potentially a catastrophic one — and highlight how much we have to lose if we do not take action. And, they evaluate solutions so that we invest in the technologies that are best for our planet and for our budgets.

One year of Research Highlights