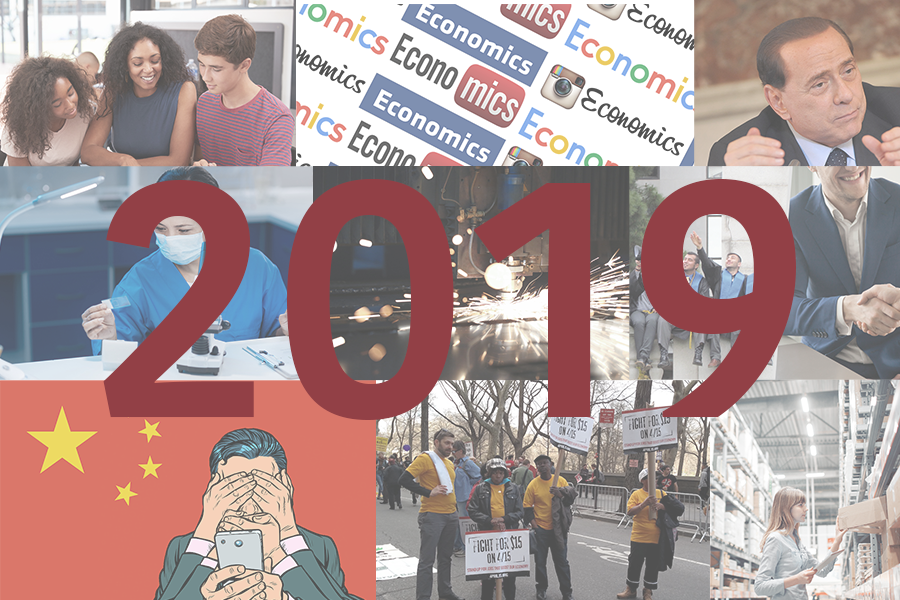 The Research Highlight series provides an overview of current economics research, focusing on why it is interesting and relevant to our everyday lives. The top ten highlights of 2019 cover everything from part-time work to carbon taxes to how economists are shaping the tech sector. You can listen to, watch, and read the most popular research highlights from 2019 below. The rankings are based on overall page views. And, you can check out more on our website.

When the economy enters a recession, pundits are quick to trot out unemployment numbers to argue about the health of the economy or the success of the government's response. Of course, job loss should be front and center when talking about the economy, but companies have more options than just hiring and firing employees.

2. The indirect effects of good teaching

Last year, American public school teachers had enough. Fed up with swelling class sizes and stagnant paychecks, they walked out of their classrooms in Oklahoma, Arizona, and West Virginia to demand adequate compensation for the value they brought to their school systems. Those educators may be even more undervalued than they realize.

It may not be enough to provide access for women and low-income students to well-regarded institutions. There are relationships formed during the college experience that disproportionately benefit wealthy male students in their careers.

5. Entertainment and the rise of populism

Cable news has taken a lot of blame for America’s political divide. Pundits featured on partisan outlets like Fox News and MSNBC speak in strident language that draws clear lines between right and left, right and wrong, and does not ask viewers to understand “the other side.” But beyond news programming, even pure entertainment content may be playing a role in driving political leanings.

In 2016, newspapers around the world marked the 50th anniversary of China’s Cultural Revolution. Inside the Middle Kingdom, authorities made sure coverage of the anniversary was almost zero, but there was a small group of undergraduates that read about it in the New York Times. A couple of months before they probably wouldn’t have. They had recently been given an uncensored version of the internet, along with a little encouragement, by a pair of researchers from Peking University and Harvard University.

7. Why did productivity drop after the Great Recession?

The engine of America’s economy may have restarted after the Great Recession, but it wasn’t firing on all cylinders. Even as unemployment dropped and more workers were earning paychecks, productivity remained anemic for years. The phenomenon puzzled economists, leading researchers to wonder whether it was caused by the recession or something else—a more fundamental shift in the economy that just happened to coincide with the worst downturn in 70 years.

8. An efficient way to reduce emissions

Economists have long championed raising the price of carbon to combat climate change and nearly 40 nations around the globe have followed suit. There’s some disagreement about the extent to which cap-and-trade policies or nationwide carbon taxes have an impact. Some critics have even claimed they could do more harm than good, stifling growth without reducing harmful air pollution. But we may be underestimating the positive impacts of carbon taxes, which have a larger effect on transportation emissions than past research has shown.

An efficient way to reduce emissions

“The dismal truth from the dismal science is that when the price of something goes up, people buy less,” said David Kreutzer of the Heritage Foundation, echoing a long held theory. “The number of workers that a firm will hire at $15 is less than the number they will hire at $7.75.” There may be some truth in that, but such arguments exaggerate the losses and ignore the upside of giving low-wage workers a boost.

10. Scientific progress one funeral at a time

Ambitious scientists dream of leaving a lasting mark on their discipline. They spend a lifetime working to shape the direction of their field by building a community of like-minded researchers and convincing others that they are the ones asking the most important questions. But when they finally reach the top of their profession, they may overstay their welcome.

Scientific progress one funeral at a time