An elite education can propel someone into a top corporate job...if they are a wealthy man. 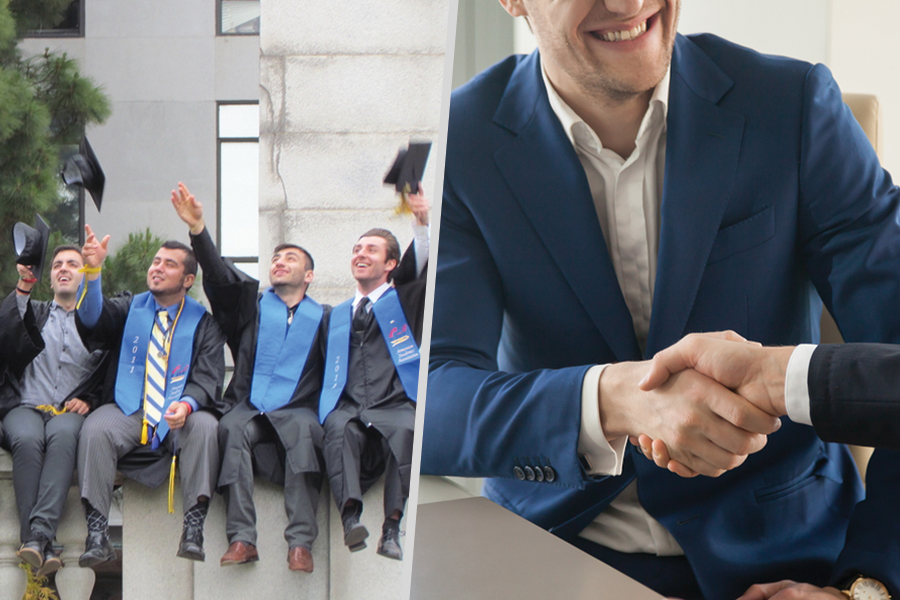 Students at the University of California Berkeley celebrate their graduation in May 2011.

Harold Levy was confident of the value that elite schools had for low-income students.

“Right now our nation is failing to fully develop the brainpower of some of our brightest students, simply because their families have less money than most other families,” said Levy, executive director of the Jack Kent Cooke Foundation, in a report that argued for expanded educational access.

The “value of attending a selective college or university is clear,” the report stated, “including higher graduation rates and higher pay for the individual.”

But the value of a diploma from Harvard or Yale is actually not all that clear. Plenty of questions remain, including whether an elite education narrows the gap between disenfranchised people and their privileged peers, or perpetuates it.

A paper in the January issue of the American Economic Review says top universities do in fact help their graduates climb to the top of the corporate ladder . . . but only if you’re a wealthy man.

“The inequality by gender and socioeconomic status in these institutions was a striking finding,” author Seth Zimmerman said in an interview with the AEA.

The research offers important insights about economic mobility at a time when there is growing concern about income inequality and diversity — or lack-thereof — in corporate leadership. The paper suggests that it may not be enough to provide access for women and low-income students to well-regarded institutions. There are relationships formed during the college experience that disproportionately benefit wealthy male students in their careers.

Climbing the ladder
The map below shows the mobility rates — the fraction of students who come from a family in the bottom fifth of the income distribution and end up in the top fifth — for the university with the highest rates in each state. Click on the buttons to view data for the school with the wealthiest students (by highest median household income), and those with the greatest share of low-income students who end up in the top 1 percent of earners.

Source: The Equality of Opportunity Project (2018)

Zimmerman studied the career trajectories of students at business-focused programs in Chile, where he had access to admissions data that allowed him to compare students of different genders and socioeconomic backgrounds. Though a poorer country than the United States, Chile still shares similar rates of income inequality and intergenerational mobility that make it a useful comparison.

Attending an elite program in Chile yielded huge benefits. Getting just one more question right on an entrance exam — and thus admission to a top school — increased the probability of holding a corporate leadership position by 44 percent and the chances of rising into the top 0.1 percent of earners by 51 percent.

However, these effects only held up if you were a man who attended an expensive private high school, a proxy Zimmerman used for determining their socioeconomic status. There were zero effects for female students and for men who attended less prestigious high schools.

My point here is not that women or less privileged men do not benefit from going to selective colleges, because they do. But the degrees that offer pathways to … the top of the corporate ladder do not offer returns to women and men of less privileged backgrounds.

This is not to say there are no benefits of an elite education for people of less privilege. Research shows that women and lower-income men benefit from admission to selective medical degree programs, where average earnings are also high, Zimmerman said. However, there aren’t many medical professionals in the top 0.1 percent of earners.

“My point here is not that women or less privileged men do not benefit from going to selective colleges, because they do,” he said. “But the degrees that offer pathways to . . . the top of the corporate ladder do not offer returns to women and men of less privileged backgrounds.”

There are a number of theories to explain this. Maybe women and low-income men sought less lucrative professions. It’s also possible that men from elite high schools entered with some set of skills, like having a second language, that that helped them win high-powered corporate jobs. But the evidence doesn’t support any of those explanations.

Wealthy male students who graduated together from an elite business school were more likely to end up leading the same firms together in their careers. A CEO looking to hire his chief financial officer might give preference to a buddy from college. And unless he made an effort as a student to befriend women and less wealthy men, then he likely ended up hiring another privileged guy.

The implications are that it may not be enough to have a diverse incoming class of students. Rather, schools must create an environment in which they interact outside their bubble once they are inside the ivory tower.

“This suggests there’s a lot of talk about how to integrate schools by socioeconomic status,” Zimmerman said.

"Elite Colleges and Upward Mobility to Top Jobs and Top Incomes" appears in the January issue of the American Economic Review.