Who pays for a raise in the minimum wage and how does it affect job growth? 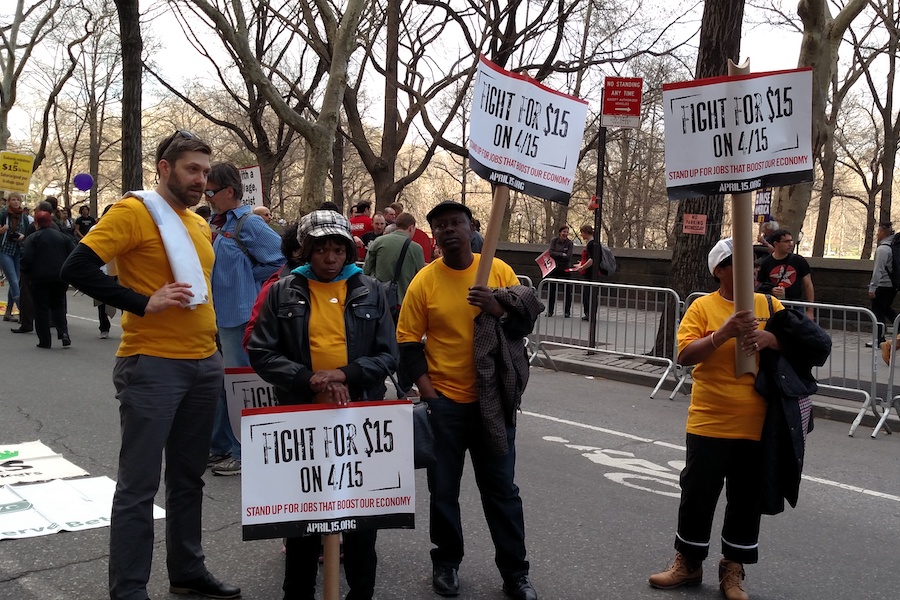 Workers rally in New York City for a $15 minimum wage.

The fight for a $15 minimum wage has gained momentum around the US. But the potential effects of raising the pay floor remains a contentious issue that has divided researchers and policymakers.

“The dismal truth from the dismal science is that when the price of something goes up, people buy less,” said David Kreutzer of the Heritage Foundation, echoing a long held theory. “The number of workers that a firm will hire at $15 is less than the number they will hire at $7.75.”

There may be some truth in that, but such arguments exaggerate the losses and ignore the upside of giving low wage workers a boost, according to a paper in the August issue of The American Economic Review. Authors Peter Harasztosi and Attila Lindner found that job losses from a major wage hike in Hungary were dwarfed by the income boost for low wage workers.

That’s not to say that minimum wage hikes are consequence free. Somebody has to pay for it. But companies don’t absorb all of the higher labor costs by cutting into profits or slashing jobs.

“It’s mainly paid for by the consumer,” Lindner said in an interview with the AEA.

The paper builds upon decades of research that began in the mid-90s with David Card and Alan Krueger’s work that refuted notions of the minimum wage being a job killer. The question remains unsettled, though. University of Washington researchers concluded that Seattle’s wage hike caused a 6-7 percent drop in low-wage jobs. The threats have seemed real enough to cause some political supporters of the “Fight for $15” campaign to reverse course.

The wage hike in Hungary, however, was far more dramatic than what unions were proposing. In a political calculation to capture working class votes, the Hungarian right-wing government in 2000 passed legislation that effectively raised it from one of the lowest wage floors in the world to among the highest, putting it on par with France. The ratio of the minimum wage to the median pay increased to 55 percent, up from 35 percent before the law went into effect.

Minimum wage and employment
Below is the minimum pay levels for various countries, as a percentage of the median wage for full-time workers, plotted according to each country's unemployment rate in 2017.
Source: OECD

The right-wing government still lost power in the 2002 election, but the pay hike proved popular enough that opposition parties did not reverse it, allowing the researchers to study the long- run effects. At the time, the Hungarian economy was doing pretty well and there were no dramatic events to throw it off track, making it easier for the researchers to tie any employment effects to the policy change.

But they didn’t dig deep into their profits to pay for it. Instead, most companies tended to just pass it on to consumers by hiking up prices. The authors estimate that three-quarters of the labor cost increases were borne by consumers, while just a quarter was covered by company profits.

It’s mainly paid for by the consumer.

“My priors shifted a lot,” Lindner said. “I think when I started the project, I thought that when labor costs increased, firm owners would have to really pay for it. It’s a really large shock, so how could they pass it on to consumers? But then the data forced me to confront this.”

When there were job losses, they were concentrated in goods-producing industries that exported to other countries. When those companies raised prices in foreign markets, their customers shifted to other producers, forcing them to cut labor costs instead of relying on higher revenue. At the same time, employers in the local service sector—which were all hit by the same minimum wage hike—did not cut jobs.

Still, even though minimum wage hikes are not consequence free for workers, Lindner said policymakers must stop assuming that they are always going to be job killers. It all depends on the characteristics of the market in which the companies are operating.

Raising the pay floor in San Francisco, where most of the minimum wage workers are working in service industries like restaurants, will have different consequences than it would in a more manufacturing-oriented city like Detroit.

“We shouldn’t expect the minimum wage to have the same effects everywhere,” Lindner said.

“Who Pays for the Minimum Wage?” appears in the August issue of The American Economic Review.

Equal pay for equal work (or I quit!)

What impact do unequal wage raises have on employee retention?