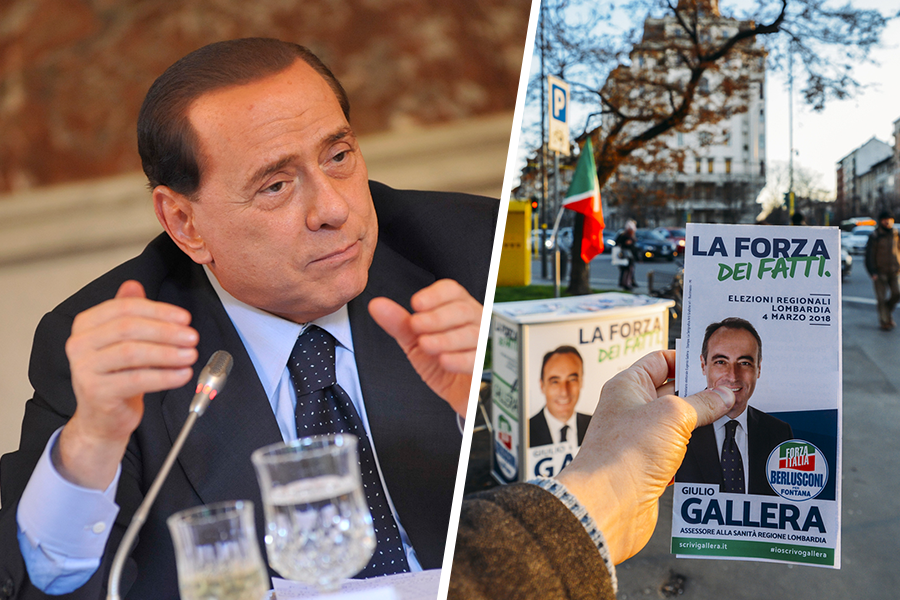 Silvio Berlusconi and his Forza Italia party gained greater support from voters who watched entertainment shows on his Mediaset network in the 1980s.

Cable news has taken a lot of blame for America’s political divide.

Pundits featured on partisan outlets like Fox News and MSNBC speak in strident language that draws clear lines between right and left, right and wrong, and does not ask viewers to understand “the other side.”

But beyond news programming, even pure entertainment content may be playing a role in driving political leanings, according to a paper in the July issue of the American Economic Review. The paper offers insights into the ways that language and messaging in all types of media can affect the behavior of people who consume it.

“It’s really about how the media can shape the life of a country, in general, and political evolution of a country,” said Ruben Durante, who co-authored the paper with Paolo Pinotti and Andrea Tesei, in an interview with the AEA.

The researchers turned to their home country Italy, where media mogul Silvio Berlusconi expanded his commercial television network in the 1980s and would reshape the political environment a decade later. And indeed, they found that even though his network Mediaset offered overwhelmingly light entertainment with no educational or political value until 1990, the viewers who consumed that vapid programming were more likely to support his populist party when he ran for office in 1994 and in the decades that followed.

It’s really about how the media can shape the life of a country, in general, and political evolution of a country.

The paper comes amid populism’s rise in Europe and America, a trend evident in the UK’s Brexit decision and the ascendance of a reality star businessman to America’s highest office. Partisan media’s influence is just one of the explanations put forth, with experts also pointing to economic and demographic shifts in recent years.

The authors were curious, however, about whether some apolitical media—with no other agenda than to entertain—could influence the political views of its audience.

In 1980, Berlusconi was an up-and-coming media entrepreneur hoping to fill a void in the television market, which was dominated by a state-owned network driven by an educational mission. Catering to a growing middle class eager to spend on entertainment, Berlusconi spent the decade rolling out Mediaset to new markets throughout the country.

At the time, Mediaset’s programming did not suggest that he was using it as a propaganda tool for political gain. Nearly all the shows were shallow, critically poorly received, and purely for fun with no educational value. Mediaset did not have a news show component until 1990. Yet, the authors found very real effects of their influence on viewers’ political sympathies.

Using station transmission data overlaid on GIS maps, the authors compared areas that had access to Mediaset before 1985 to those who were introduced later on.

TV Content
The types of shows that Mediaset programmed were very different in nature than state-run television network RAI. Below is a breakdown of how they compared on various categories.
Source: Durante, et. al (2019)

Voters who had earlier access to Mediaset were more likely to vote for Berlusconi’s Forza Italia party in 1994. The effects were lasting, with the impact felt across five elections and nearly a quarter of a century.

This was also the case in smaller and more rural areas that were less likely to be targeted by Mediaset when it was deciding where to place its transmitters or antennas, and the results held up even when comparing neighboring municipalities with different access to the network.

The impact was especially large for young children and the elderly — the two groups who watched the most TV — though for different reasons. Entertainment TV imprinted itself on younger viewers that made them less academically and civically engaged later in life, and in turn less sophisticated voters. For older viewers, it developed loyalty that made them susceptible to pro-Berlusconi propaganda later on when Mediaset launched news programming.

The effects didn’t seem to be driven by ideology, though. Survey data didn’t support notions that Mediaset viewers were becoming more conservative, but they did tend to be less civically engaged and favor politicians who spoke with a clear, simple message.

By 2013, as support for the center-right Forza Italia waned, those heavy TV watchers drifted to the more left-wing Five Star movement. A Venn diagram of these two would have very little overlap on policy positions. However, they shared a populist, anti-establishment rhetoric and frustration with mainstream politics.

“The language codes that were popularized by TV also made people much more susceptible to the populist party because they used very simple language,” Durante said. “They used accessible language. And that can potentially be very powerful.”

The paper is focused on Italy, but there still may be broader lessons for the influence of media on political behavior, Durante said. The messages viewers are exposed to, expressed in simple direct language, can make people especially attracted to the leaders that trade in that same linguistic currency. After all, who would you trust? Probably the person you understand.

Berlusconi isn’t the only politician to understand this.

“Italy’s just 20 years in advance with respect to many other countries,” Durante said. “Now these tycoons that cover the political sphere from a background of entrepreneurs are quite common.”

"The Political Legacy of Entertainment TV" appears in the July issue of the American Economic Review.