Why female employees take on thankless tasks shunned by men... and how that may hurt women's careers 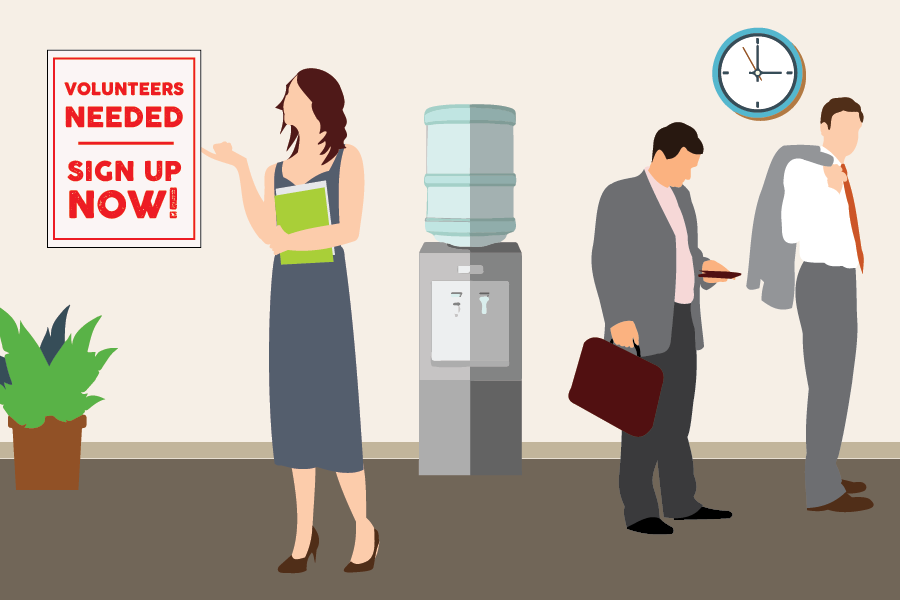 Women are not only more likely than men to volunteer for thankless tasks in the workplace, but they also are more likely to be asked by employers to do them.

There are necessary tasks in every workplace that nobody wants to do, and yet somebody has to step up.

Maybe it’s cleaning out the break room refrigerator, organizing an office party, or volunteering for some committee that will suck up hours of time with no promise of reward. They’re not part of anyone’s job description and won’t lead to a promotion or pay raise.

Researchers Lise Vesterlund, Linda Babcock, Maria Recalde, and Laurie Weingart have just published a paper about this phenomenon in the March issue of the American Economic Review.

The AEA recently spoke with Vesterlund, Babcock, and Recalde about their paper.

The edited highlights of that interview are below.

For more about how they conducted their research, the implications for employers, and how it applies beyond the workplace, listen to the extended audio interview. You can hear it by clicking on the media player.

AEA: What kind of tasks are we talking about here?

Lise Vesterlund: The kind of tasks that most of the literature has been focusing are on what you might call promotable tasks. They're the tasks that everyone pays attention to when you come up for promotion...What we wanted to look at was sort of the opposite end of the spectrum. So, the tasks that everyone knows have to be done within a corporation but that nobody really pays attention to how well you do on those tasks.

Linda Babcock: In some preliminary paper that we did before this, we did a wide range of surveys where we asked people about these kinds of tasks in their organizations that they do that they know are not going to help their promotion and they wish they didn't have to spend time on. We got a huge range of different kinds of tasks. Some small, like cleaning out the refrigerator at work or moving boxes or cleaning out a work area. Or things like planning social events for the organization that's really important for the social fabric of the organization but again, like Lise said, are not going to show up on your performance evaluation.

Babcock: We got interested in it as female scientists because we found that in our own work lives, we were spending so much time on these kinds of things that we didn't really get to the meat of what our careers are about, which is doing research in a university. So we actually formed a club amongst ourselves to talk about these issues in our personal lives and how we can make better choices for ourselves so that we weren't being spread too thin in our work lives.

AEA: What's the name of the club?

Babcock: The club is called "I just can't say no." Basically, I reached out to four of my friends. None of them actually knew each other at the time, four of my friends who I knew were suffering as I was under the weight of these non-promotable tasks. And I reached out to these other female friends and we started getting together and formed a very close-knit bond to really talk about these issues and thinking about not only how they affect our own lives, but how they affect the lives of the people we supervised...What we realized is that we may also be continuing the problem in that when we wanted someone to do something that was a non-promotable task, we were much more likely to ask women because we knew that they would say yes.

AEA: What did you find when you actually dug into the research?

Vesterlund: I think the existing work gave very little insight to why we were seeing these differences. And that's sort of where our paper really comes in. Do we see differences in a more controlled setting? Which we do. We find both that women are more likely to volunteer for these tasks. They are more likely to be asked to perform these tasks. And when they are asked, they are far more likely to agree to these tasks....The environment that comes closest to the kinds of environment that we were trying to mirror in the lab is whenever I go to a promotion committee... at the university level, what happens in that setting is that the dean will come in and ask for someone to chair the committee which really means who's going to be the person who's willing to write the report afterwards. So it is a very, it is not a task that is promotable. You don't influence any outcomes. It's just a question of who writes the report.

We wanted to figure out, if you’re in a setting like that, who steps up to the task. So what we did in the laboratory is we paired people up in groups of three. We gave them 2 minutes during which they, similar to volunteering to chair the committee, could click a button if they wanted to chair the committee. If nobody in the span of 2 minutes clicked the button, everyone got a dollar. If somebody clicked the button, that person got $1.25. But the two other members of the committee got $2. So, it's clearly in everybody's interest to have someone click the button. ...What we found was that women systematically in random pairings volunteered more. So women volunteered about 34 percent of the time whereas men volunteered about 23 percent of the time.

I think the existing work gave very little insight to why we were seeing these differences. And that's sort of where our paper really comes in.

Babcock: What's nice about our setup is that when we've been talking about these non-promotable tasks, we always heard from people, “Well, women are just better at these." Not only did they like doing these tasks, but they were actually better at performing them. So what's nice about our setup is that men are not inherently worse at clicking a button than women. So we really picked a setting in which you could rule out that women were simply better at this task.

Babcock: There are really two factors that of course affect the wage gap. One is that men and women are paid differently for the same job. You can think of that as an apples to apples comparison. And also that men and women are in different jobs. You can think of that as apples to oranges. I think that our work actually has implications for both of these phenomena. That is, men and women are in the same job. They may be paid differently because of their different performance and different productivity, and that can be the case if women are spending more time on these low promotable tasks versus men. They are going to be less productive in the promotable tasks because they just have fewer hours in the day to spend on them.

Men and women in the same jobs may be paid differently with men being paid more because of the difference in how they allocate their time. You can also think about the apples to oranges comparison that I made that is women and men end up in different jobs and that also contributes to the wage gap. Well, I think our phenomenon also plays a role there in that women are going to be less likely to be promoted than men because of the fewer hours that they spend on these promotable tasks and so it's going to lead to men ending up in higher level types of jobs than women. We think this has very large implications for the wage gap.

AEA: If women are more likely to volunteer for these low promotability tasks, what kind of actions can they take to break the cycle?

Recalde: I think what we show in the paper is that we are expected to perform these tasks and often asked to do them. Unless we break this cycle, it's in our best interests to step up to the plate because otherwise we may fail to do the task entirely as an organization. So, all we need is almost good bosses or a way to allocate tasks in a fair manner, which may be very simple in an organization because you could just think about a random way to allocate or ask people to do these tasks. So that as long as you are not expected to do something or to perform a task all the time, we are actually very willing to let other people do that. I think in some ways we should be able to say no sometimes and more often, but it's not always about saying no because we need other people to also say yes and step up to the plate when they're asked to do so.

Babcock: It may not be good advice to tell women to say no because there may be backlash against them if they do. I think the change in our organizations really has to come from good bosses, as Maria said, that we have bosses that are going to allocate this work more equitably and not just ask the woman because she's going to say yes.

AEA: What has the discussion been like in your group since you came out with this paper?

Babcock:  We've made a lot of progress in our group about being more conscious and making more purposeful choices about how we spent our time. But I will say that three of the group members since the inception of the group actually took on these huge administrative positions that I'm not sure are really promotable tasks. So, I'd like to say we've had a lot of success, but I think that what has been most successful is just having an open dialogue about this.

Vesterlund: I think the one thing that has been very helpful in our group is that someone holds you accountable to what your implicit no is. Because often times we have this sense that we can always fit in more things and what has been nice about the group is that if you get because of course there are amazing opportunities that one gets that if you want to say yes to, but what has been nice about the group is that when you come and present a new request, they just say, "That's wonderful, congratulations. What are you going to say no to in return?"

“Gender Differences in Accepting and Receiving Requests for Tasks with Low Promotability” appears in the March issue of the American Economic Review. Music in the audio file is by Podington Bear.

How far have we come in closing the earnings gap between women and men?