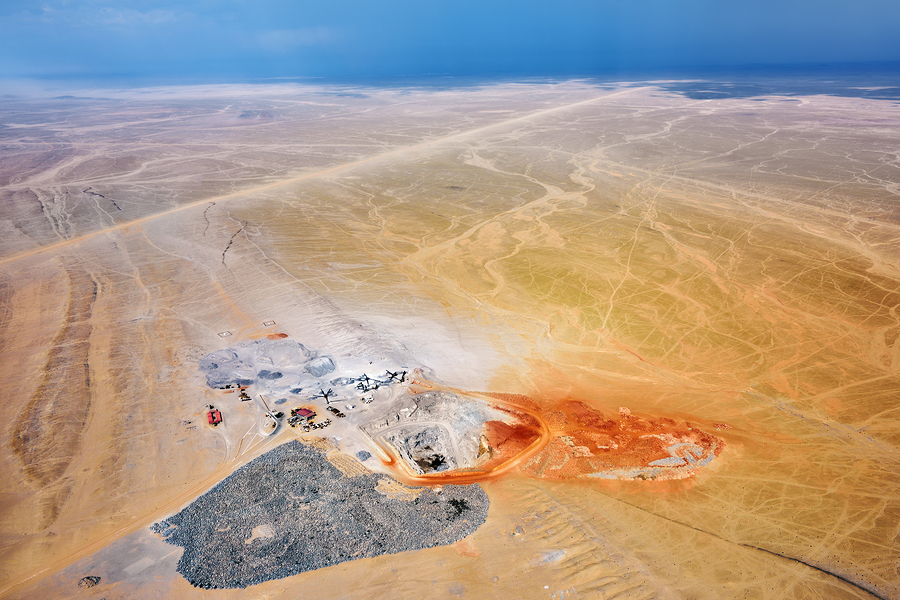 Alluvial diamond mine in the Namib desert.

The 2000s decade was a boom time for the African economy. Rising prices for industrial inputs like copper, zinc, and nickel – mostly driven by new demand in China and India – meant higher incomes and more investment on the resource-rich continent.

But economists have long noted that resource extraction can be a double-edged sword for developing economies. Commodity prices are volatile, and focusing too much on one cash cow industry can leave other industries neglected and underdeveloped. Exchange rate effects of resource booms can crimp other industries by making them less competitive globally.

Resource wealth can also spark conflict. A profitable mining sector can make a region or territory a juicy target for rebel groups or inspire a separatist movement. Environmental degradation or pollution can inspire protests or riots. And mineral wealth can provide a springboard for cash-strapped paramilitary groups looking to raise funds or trade for arms.

All of this means that the rising commodity prices that spurred growth in Africa may also have increased the risk of violent conflict there, especially since evidence suggests that countries with weaker institutions are more vulnerable to the resource curse.

In a study appearing in this month’s issue of the American Economic Review, authors Nicolas Berman, Mathieu Couttenier, Dominic Rohner, and Mathias Thoenig trace the effects of rising commodity prices on the localized regions in Africa where those commodities were mined. They find that violence did indeed increase when mining operations became more lucrative.

A mineral-rich continent
A map depicting regions with active mining in the authors' data. Click each commodity to see where it is mined in Africa and how much the price rose during the commodity boom.
Source: author data on mining, World Bank Global Economic Monitor

The researchers took a highly localized approach to answering this question, and that’s important, according to University of Lausanne economist Mathias Thoenig, one of the authors on the paper.

“Most of the existing papers look at country-level evidence, and we look at really fine-grained disaggregated evidence,” said Thoenig in an interview with the AEA. This is important because “the impact of natural resources is local, it does not necessarily affect the entire country.”

To remedy this, the researchers divided the map of Africa into a grid with thousands of squares measuring half a degree of latitude or longitude on a side. This works out to cells that are all around 1,200 square miles (about the size of Rhode Island). Most cells don’t have any large mining operations, but those that do were categorized according to the main mineral extracted there (see figure above).

The researchers then analyze a geocoded database of violent conflicts and find that higher prices for the main mineral in a cell translates to a higher likelihood of violence conflict in that cell. By 2010, elevated commodity prices were raising the likelihood of violence by more than 10% in some parts of northern and western Africa, according to their estimates.

But unfortunately the violence wasn’t limited in time and space. The researchers also study the process by which violence diffuses to surrounding areas after an armed rebel group takes control of a productive mine. The researchers were partially motivated by watching what was happening with the Islamic State in 2014.

“At the time when we launched this project, the Islamic State was conquering oil fields in Syria and Iraq, and that was really part of their financing capability,” said Thoenig. Would the rising profitability of mines in Africa be a boon for the rebel groups that captured them?

The researchers trace the actions of hundreds of rebel groups active between 1997 and 2010, including some that won battles or captured territory in mineral-rich cells. They find that when a rebel group succeeds in capturing a lucrative mining area, violence is more likely to occur for several years afterward, with effects on cells as far as 1,000 km away. By one rough measure,a group’s capture of a mining area triples the number of violent events that can be expected from that group in the next year.

Our empirical results suggest that one way for domestic governments to dampen rebellion feasibility effects would be to put in place more stringent anti-corruption policies, and to support transparency/traceability initiatives in the mining industry.

So rising prices led to more conflict, which can beget even more violence if and when rebel groups get access to profitable mines. Was the commodity boom actually bad news for Africa after all?

“On net, I think the effect [of the commodity boom] is positive, because this was a decade of historically pretty high growth in Africa, especially with respect to the 80s and 90s, where most of the continent experienced a negative growth rate,” said Thoenig. But “some areas suffer from this because of local conflict, so it’s a bit of a dark side to this golden decade in Africa.”

Thoenig is optimistic that African states can rise above the resource curse as institutions develop. The researchers show that higher prices were less likely to lead to violence in places with less corrupt governments and less religious fractionalization. It’s evidence that these countries and their economies aren’t doomed to be held back by their resources. ♦

This Mine Is Mine! How Minerals Fuel Conflicts in Africa appears in the June 2017 issue of the American Economic Review.