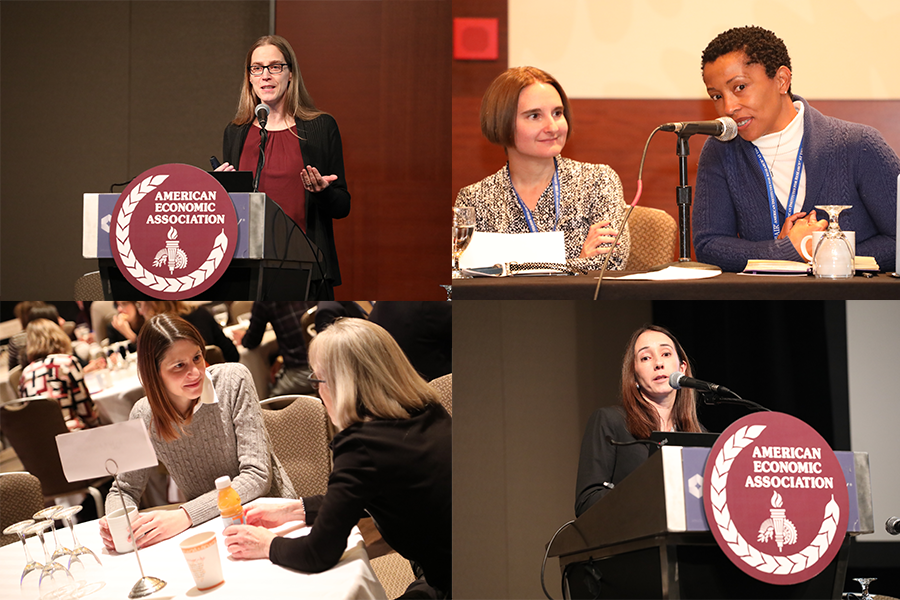 Diversity in the economics profession was among the issues discussed at the 2017 AEA Annual Meeting in Chicago.

The economics profession has a diversity problem.

It’s not a new problem. Yet, the profession’s gender imbalance has been a topic of intense debate lately.

A Berkeley undergraduate’s thesis on sexism in economics drew widespread media attention amid a broader conversation about the obstacles women face in male dominated industries like high tech.

Swarthmore professor Amanda Bayer has worked much of her career to address diversity in economics. She has published papers about it, served on the AEA’s Committee on the Status of Minority Groups in the Economics Profession, and co-organized a national summit on the topic with the Federal Reserve. She is also the creator and editor of Diversifying Economic Quality, a widely read online resource that promotes inclusive, innovative, and evidence-based teaching practices in economics.

She recently spoke with Chris Fleisher and Diana Schoder of the American Economic Association about the severity of the gender gap in economics, why addressing it is more than an issue of fairness, and her own experiences as she advanced her career.

An edited transcript follows and the fuller length interview can be heard by clicking on the media player below. 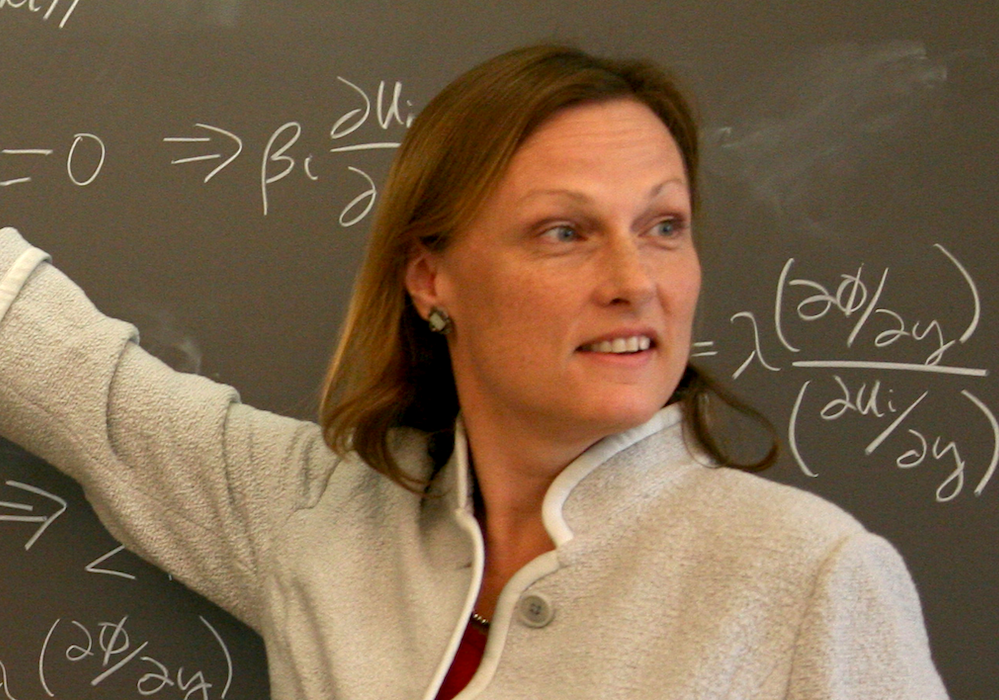 Chris Fleisher: How significant is the gender gap in the economics profession?

Fleisher: I would say maybe fewer than one-fourth?

Bayer: All right, so we do better than that. About 30 percent across all types of institutions of econ majors are female.

Fleisher: The disparity is even huge compared to other social science disciplines. Why is economics any different from any other discipline?

Diana Schoder: A lot of people talk about math being a big obstacle to entering economics. But based on what you just said about economics sliding behind even STEM fields and other math based or highly technical fields, why might economics have any differences?

Bayer: There's a huge misconception that it's the math component of economics that's keeping women away. And that's actually not the situation. About 45 percent of math majors at the undergraduate level are women. So, women major in math at a higher rate than they do in economics. Other studies with regression evidence show that math isn't the factor that explains the gap.

Fleisher: Can you tell us a little bit more about how you came to the profession?

Bayer: That's a funny question. The summer before my first semester in college, I needed to sign up for four courses for the fall. And I selected economics as one of them. My father looked at my preliminary selections and said, "Oh, don't take economics. That was the dullest, driest, most boring course I've ever encountered. I want you to start your college career off right with exciting topics." So, I erased the economics selection and chose some philosophy course or something. I didn't come back to economics until the spring of my sophomore year, so relatively late. But economics was a popular major at my college so it found me and once I was in that class, I was hooked. 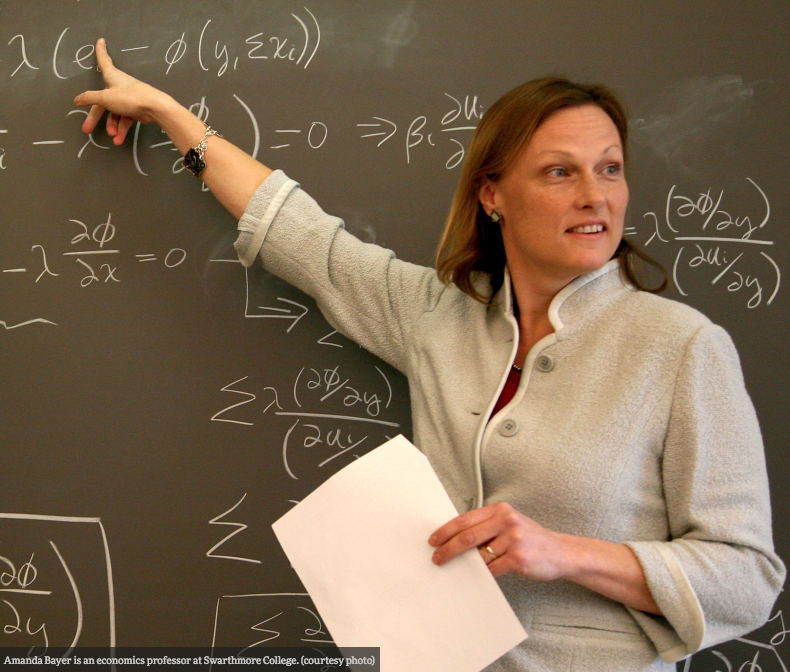 Schoder: As you moved through the profession, did you personally experience any of this gender bias that we've been discussing?

Bayer: Oh, absolutely. I was not really aware of my gender, or gender was not really a big part of my identity before being surrounded by economists — finding myself as the only, or one of only a few, women in the room. And that alone does not bother me. I don't mind being different. But when it started to affect my productivity, that I did mind.

Cecilia Rouse at Princeton and I wrote a paper that appeared recently in the Journal of Economic Perspectives to address three large misconceptions in the profession. The first was that there's no problem. Many economists aren't really aware of the disparities that do exist along gender or racial and ethnic lines within the profession. So, showing some basic data on those disparities was our first task.

The second misconception is that it's not a problem. And there are economists who will say, “Well, the gender or racial identity of an economist doesn't matter. Two people can add two plus two the same way and come up with the same answer, four.” But there is an increasing number of studies that document quite rigorously the impact on the profession (from the lack of diversity).

And then the third misconception that we address in the paper is well, "That's not my problem." Meaning that economists typically, in part because of the tools and frameworks that we use to study social and behavioral outcomes, focused a lot on the supply side — focused on what attributes or tastes women were bringing to the profession that caused them perhaps not to endure within the profession.

Schoder: Let's circle back to the second misconception for a second. So, as a woman, I'm definitely interested in the effect gender bias will have on me. But why should anyone else care?

Bayer: Great question. It's not just a matter of fairness. There's efficiency, and so diversity of individuals within a group affects the productivity of that group. The lack of diversity in our profession likely hampers our whole discipline, constraining the range of issues that we address and limiting our collective ability to understand familiar issues from new perspectives.

Fleisher: I was curious to get your response to a recent paper, by undergraduate Alice Wu, looking at data from Econ Job Market Rumors.

Bayer: I'm so glad that she wrote this paper. It does not surprise me. I've been on that discussion board and I've seen the conversation, and I've seen the sexism and racism and others "isms" that are rampant. It's great that now a much larger group of people is noting the phenomenon and perhaps doing something to address it. My position is that even if we get rid of that online forum and silence those bad apples, the rest of us have much work to do. Even myself as a woman and even myself as someone who is an expert in diversity inclusion innovation, we need to be vigilant and examine our own biases and our own habits that may be holding others back.

Schoder: I've heard that it's hard to get ahead in economics when you're studying gender. And you mentioned that it is something that all of us need to do to really fix this problem. So how do you become a female economist without giving up any of your potential avenues for advancement because you're studying gender?

Bayer: Well, I might be (sacrificing potential avenues for advancement). There are many economic problems that intrigue me. Would they be better received by the profession? Would they be more easily published in various venues? Perhaps. There is evidence to the effect that it's harder for women to present research on disparities and be successful. But I guess, personally, if you're asking, I'm motivated by a larger purpose. Success in terms of traditional markers is not as important to me as making sure that the world is a better place once I leave it. And contributing my professional expertise to solving important problems carries me forward.

The lack of diversity in our profession likely hampers our whole discipline, constraining the range of issues that we address and limiting our collective ability to understand familiar issues from new perspectives.

Fleisher: Are there obvious things that departments need to be doing to address this problem?

Bayer: One of the most important things departments can do is to revise how they present economics to undergraduates, reconsidering both the content of courses and the methods by which the content is taught. Economists tend to be lecturers, and maybe you can tell that by listening to me now, but students really engage with the material much more intensely when they get to discover it themselves.

Fleisher: That just sounds like better teaching. How would that address a gender gap?

Bayer: Well it's going to help all students. But it's going to have an outsized impact on students who have a weaker tie to the field to begin with. Maybe they have less experience with economics because of high school training, or they have less encouragement from family or society to explore economics. So it's all of us on the margins who would be less engaged by less engaging teaching techniques.

Fleisher: What idea do you most want the profession to take away at this moment in terms of addressing the gender gap and gender bias?

Bayer: If I had to boil it down to one, it would be for us each to take responsibility. It is really on us to create a more fair and efficient profession. The pipeline analogy, which has been used over the years and in many contexts to describe the flow of individuals into a career or profession, has been criticized in part because it suggests that there is just one way to become an economist, and you get in at the beginning of the pipeline and you stay in, and you become an economist. But I don't like the pipeline analogy because it makes us passive. It suggests that those of us who are already in the profession are sitting at the end of the pipeline, waiting for the product to be delivered to us. And that's actually not the reality of the situation.

We're positioned all along the pipeline and there are students at various stages of their careers and colleagues and various stages of their careers flowing through. And we're there not plugging leaks, not pumping to strengthen the flow, and in fact maybe even taking a torch to the pipeline and creating new leaks. So we are active participants in the development of others' careers, and once we recognize that, then we can change our actions, both the large formal decisions and the smaller everyday interactions to be more supportive and a positive influence on others’ careers.

"Diversity in the Economics Profession: A New Attack on an Old Problem" appeared in the Fall 2016 issue of the Journal of Economic Perspectives. Music in the audio file is by Podington Bear.

Putting more women on the ballot can improve male politicians too