How is turnout affected by excuses for not casting a ballot? 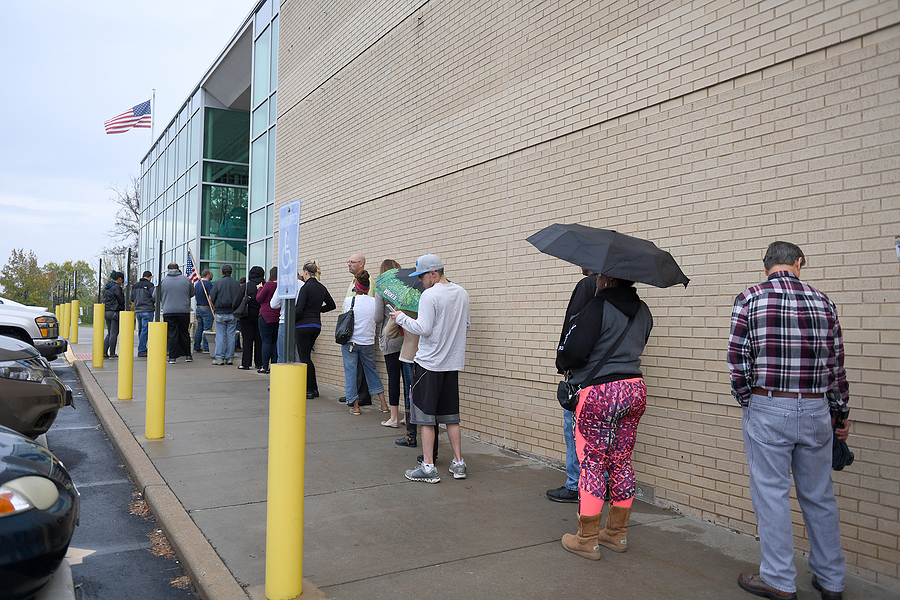 Voters come out to the polls in St. Louis, MO, for the 2016 presidential election.

With one day to go until the US presidential election, the politics and economics website FiveThirtyEight.com gave President Trump a 9 percent chance to win a second term.

Those odds are based on massive amounts of polling data that are run through tens of thousands of simulations.

Economist David Levine doesn’t believe those predictions, which he says miss a lot about which voters will actually cast their ballots.

“They have statistical models that say historical turnout was this or that in this state and that state and so forth. This is not terribly useful,” Levine told the AEA in a Zoom interview from his home in Florence, Italy. “The reason for that is turnout is uncertain for reasons that are intrinsic to the nature of voting.”

In the October issue of the American Economic Review, Levine and co-author Andrea Mattozzi develop a model that goes beyond past turnout and polling data to go deeper into who is actually going to vote.

Their model considers how peer pressure and, critically, the ease with which people can invent excuses for not voting—something known as “monitoring costs”—gives one party an advantage over another.

Presidential turnout
Voter participation in 2020 is expected to surpass even 2008 levels, which was the highest it had been in 40 years.
Source: United States Elections Project

The research comes in the lead-up to a high stakes and contentious general election in which turnout is expected to reach record levels, even amid a pandemic. Citizens of all political stripes are motivated by strong feelings over President Trump’s performance in office, but the pandemic is going to radically influence turnout. After all, the threat of contracting a deadly illness is a pretty good excuse to stay home on voting day.

Economists have studied voter turnout for decades, including how social norms play into their decisions. Politicians have even used these insights to craft ways of shaming their supporters into getting to the polls.

For example, the weekend before the 2016 Iowa Caucuses, residents in that state received mailers accusing them of a “voting violation.”

“You are receiving this election notice because of low expected voter turnout in your area,” the mailer said. “Your individual voting history as well as your neighbors’ are public record. Their scores are published below, and many of them will see your score as well. CAUCUS ON MONDAY TO IMPROVE YOUR SCORE and please encourage your neighbors to caucus as well.”

Though it appeared to be an official state document, the mailer was actually sent by Republican candidate Ted Cruz’s campaign. Cruz understood that applying peer pressure by revealing someone’s poor voting history could push less-engaged citizens to turn out.

In their model, Levine and Mattozzi build on those peer-pressure insights and consider the effects of high or low monitoring costs.

When monitoring costs are low, it’s difficult for someone to come up with an excuse not to vote and—because of peer pressure—those otherwise passive voters will get to the polls. In that case, the dominant party has the advantage. After all, if there is high turnout, then whoever has a bigger base is going to win.

But if the opposite is true and it’s easy for someone to excuse not voting (high monitoring costs), then a minority party has the advantage.

That’s what makes predicting turnout in this election so difficult, Levine says. It’s clearly high-stakes, which will motivate even less-engaged voters and clearly advantages Democrats because they are the larger party. But, the COVID-19 pandemic really offers a good excuse not to vote. That makes it difficult to apply peer pressure on the right voters.

Parties don’t want to put pressure on people who were legitimately sick, perhaps even in the hospital. They want to find all those other people who otherwise could cast a ballot, but for some reason chose not to, believing they wouldn’t be judged too harshly because they had a solid excuse.

As to this week’s election, Levine’s research points to strategic mistakes on both sides of the aisle. The polarizing rhetoric from Republicans has made this a high stakes election, which drives turnout and gives Democrats the edge. But Democrats’ push for more mail-in balloting, while it makes it easier for voters to cast their ballots safely, nevertheless makes it more difficult to know if all their supporters are actually casting a ballot.

“Voter Turnout with Peer Punishment” appears in the October issue of the American Economic Review.

Would requiring incumbents to match their previous best vote share improve our democracy?