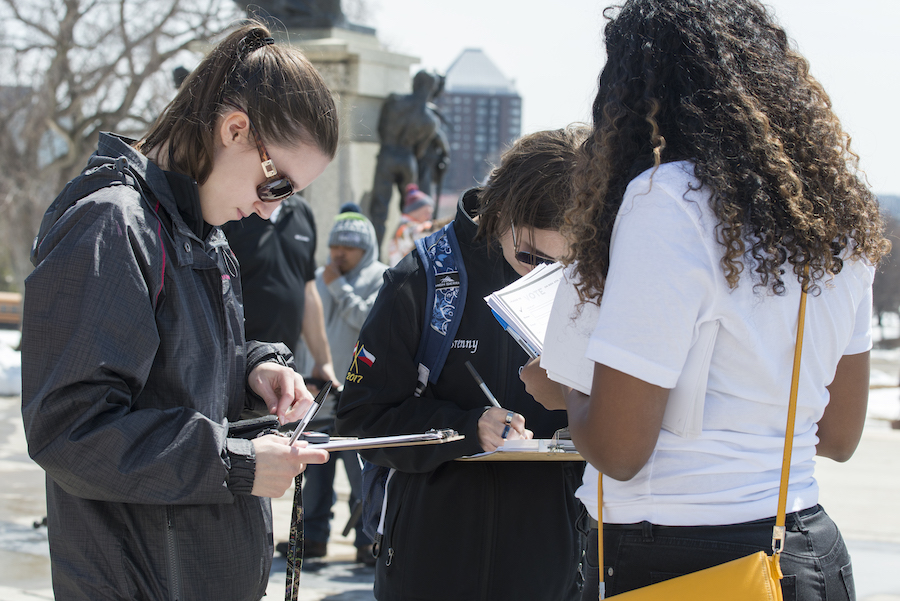 Around 1000 students walked out of school and gathered at the Minnesota capitol as part of nationwide protests against politician inaction on preventing gun violence. They called on federal, state, and local government to take actions to reduce gun violence.

It wasn’t a winning strategy. Many young voters sat out during the primaries and Sanders dropped out of the race. Indeed, younger voters historically have turned out to the polls at lower rates than their parents and grandparents.

Making it easier for young people to register to vote not only would boost their political participation, it would also have an impact on the policy issues that matter to them, according to a paper in the August issue of the American Economic Journal: Economic Policy.

Authors Graziella Bertocchi, Arcangelo Dimico, Francesco Lancia, and Alessia Russo say that allowing young people to “preregister” before they’re eligible to vote reduced the gap between young and old in both turnout and registration. And state lawmakers responded by increasing funding for higher education—a relatively flexible line item in most state budgets that is a critical concern for voters in their teens and twenties.

“This question is of enormous relevance in view of the fact that in the US, for example, people aged 39 or younger, that is, the Millennials and the Generation Z, make up more than a third of eligible voters and could make a significant impact on elections,” Russo said in an email interview. “But they consistently turn out in lower numbers compared to older generations.”

The paper offers evidence around how states respond when certain groups gain political influence. It also helps explain the low-turnout issue that has puzzled policymakers for decades. Recent surveys have shown that young people are interested in politics, but for some reason they don’t come out to the polls.

America’s peculiar two-step voting process that requires registering as a voter before casting a ballot is part of the problem, Russo said. It is enough of a hassle in both time and effort to inhibit many people who would be voting for the first time.

The authors looked at what happened in states that eased the burden on new voters by allowing them to register before they were eligible and in convenient locations like schools, campuses, and motor vehicle bureaus.

Pregregistration led to an average of 20,000 additional young voters in each state that adopted it. And state governments responded to this newly enfranchised youth constituency with more education funding. The authors say that preregistration increased higher education spending by about $25 per capita.

“Taken together, our results suggest that a 1 percent increase in young voter turnout caused by preregistration increases the allocation of state resources to higher education by roughly 0.77 percent,” Russo said.

This question is of enormous relevance in view of the fact that in the US, for example, people aged 39 or younger, that is, the Millennials and the Generation Z, make up more than a third of eligible voters and could make a significant impact on elections. But they consistently turn out in lower numbers compared to older generations.

The increase in education expenditure was larger in states where political competition was weaker or that had a larger share of young individuals.

The research underscores how important voter access is to increasing participation and determining how resources are ultimately allocated to various constituencies. Some states are now attempting to roll back those rules and put new restrictions that would disenfranchise certain groups.

“[N]ot only because they tend to disenfranchise young voters,” she said, “but also because they weaken the political incentive to implement fiscal policies, such as the provision of public education, that benefit future generations in a more sustainable world.”

“Youth Enfranchisement, Political Responsiveness, and Education Expenditure: Evidence from the US” appears in the American Economic Journal: Economic Policy.