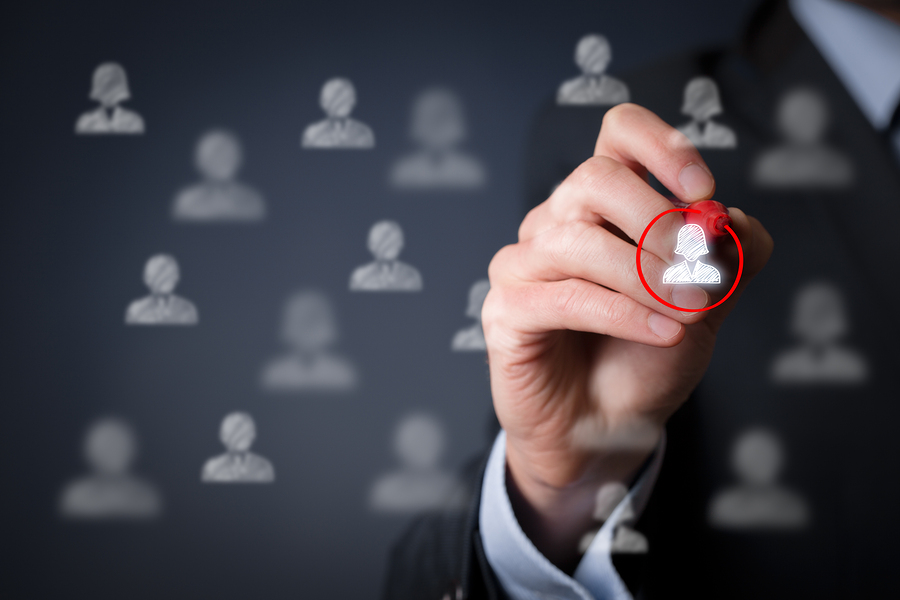 There’s no question that women are underrepresented in academia, but there are lots of theories about why. Is it deeply-ingrained stereotypes about brilliance and women’s capabilities? Is it the “leaky pipeline” that sees highly-trained women pursuing careers outside academia? The role of maternity in a field where people face career-defining tenure decisions in their early 30s could also be a factor.

In some European countries, concern has focused on the male-dominated tenure committees that are convened to decide whether young professors should be promoted up the ranks. These committees are composed of full professors in the top roles and tend to be mostly or exclusively male. Does this put young female professors at a competitive disadvantage at a make-or-break moment in their careers?

In theory, there are plenty of ways that could happen, according to Manuel Bagues, an economist at Aalto University in Finland and one of the authors on a study about tenure committees appearing in this month’s issue of the American Economic Review.

“You have good reasons to expect that having more women in committees might be favorable for female candidates,” said Bagues in an interview with the AEA, even if evaluators aren’t compromised by stereotypes or prejudicial thinking. “Typically there is gender segregation in the types of research that people do, and we all tend to believe that the thing we do is the most important thing in the world. Academic networks are usually very important in these evaluations, and they tend to be gendered. . . female candidates may be less likely to have connections in these committees.”

Stereotypes can play a role as well. The study notes global survey data showing that a sizeable minority of men believe that men are simply better suited to leadership roles in politics and business – views that are much less common among women. Then again, audit studies show that female evaluators also exhibit bias against female academics, at least in hypothetical hiring decisions.

You have good reasons to expect that having more women in committees might be favorable for female candidates.

An increasingly popular response to this disparity: gender quotas. Not for the positions to be filled, but for the committees making the decisions about who will fill them. Including more women in roles of authority at tenure time is seen as a way to balance the scales and introduce a wider perspective to the promotion decision.

But quota systems that require a committee to be comprised of, say, 40% women have some downsides that are mostly hidden from public view. Committee members are drawn from the ranks of full professors, where women are even more underrepresented. To achieve near parity on tenure committees, some women in these top positions need to serve again and again.

“Once this [quota] policy has been introduced, we knew many full professors [in Spain] who were being called all the time to be on these committees and they were angry,” said Natalia Zinovyeva, also of Aalto University and another author on the paper. “Because of these quotas, women are sitting on committees perhaps 3 or 4 times more often than men, so imagine the time they spend.”

This can be a significant drag on these professors’ careers, because time spent evaluating young professors for promotion is time away from research. Another study recently appearing in the American Economic Review found evidence that female professionals are more likely to end up performing “non-promotable” tasks that are crucial to keeping an organization running but aren’t rewarded or valued when considering promotions or salary.

Bagues and Zinovyeva were curious how these policies – which had clear costs for senior female researchers – would actually affect hiring and tenure decisions. Along with coauthor Mauro Sylos Labini, they analyzed tenure committee data from Spain and Italy to see what happened when more women participated.

Committee selection is basically random, as professors who volunteer to participate are drawn from all over the country. Some committees just happened to have more women, while many others had zero or just one (at least before Spain introduced quotas in 2007). This creates a natural experiment for the researchers: they can compare the records of committees that were male-dominated with ones that were more balanced.

After analyzing approximately 100,000 hiring decisions across the two countries, the researchers found essentially no strong statistical evidence that having more women on committees improved the prospects of female applicants (see figure below).

There also didn’t seem to be much change in the quality of candidates who were approved for promotion. Candidates approved by diverse committees had roughly the same previous and subsequent research output as those approved by male-dominated ones.

What happens with more female decision-makers in the room?
Promotion rates for women applying for tenured professorships in Spain (2002-06) and Italy (2012-14). Applicants were evaluated by committees of randomly-selected full professors that often included few or no women. When evaluation committees happened to include more women, however, female applicants did not fare noticeably better. 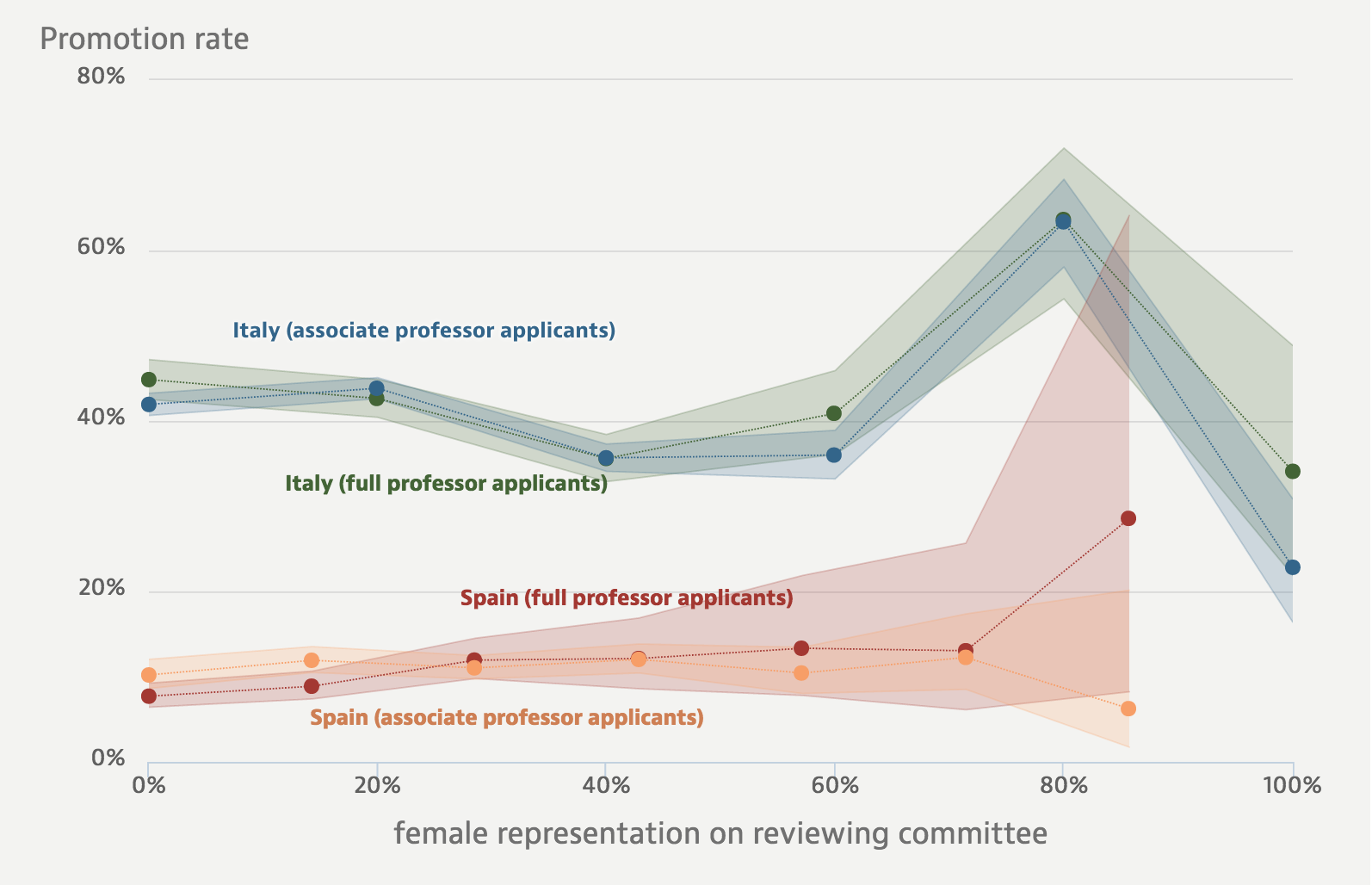 In the Italian evaluations, where the researchers could see how individual committee members voted, they did find an interesting pattern: including more women in a committee had a noticeable effect on the voting patterns of male evaluators, who became slightly but measurably more negative toward female candidates.

That could happen for a number of reasons, such as the licensing effect. “When there are some women sitting on the committee, men might feel more license [to judge female candidates harshly] because there is a female evaluator that will ‘defend’ the female candidates,” said Bagues.

According to Zinovyeva, the appearance of female decision makers in an arena that was once almost exclusively male might also lead to subconscious or overt resentment. “Traditionally in certain fields there were men sitting on these committees,” she said. “Once women join the committees, there can be a backlash.”

Probably the most important result of the paper is what they didn’t find: any significant improvement in female applicants’ odds of advancement.

“Evaluation is probably not the biggest problem” for women’s advancement, says Bagues, although it may matter more in places like the U.S. where decisions are made at the university level and evaluators tend to know candidates personally.

Despite this and other studies with similar findings, the message may not be getting through. Enforcing gender quotas on tenure committees is an idea that still has a lot of momentum, with France recently joining the list of countries that requires them.

This may be in part because including more women in the room when decisions are made feels like an equality-positive move and blunts criticism. But all told it may just amount to a tax on top female academics’ time without actually having the intended effect.

“Our feeling after all this research is that there are somewhat deeper problems with representation,” says Zinovyeva. “So the focus of policymakers should probably shift to something else.”

Does the Gender Composition of Scientific Committees Matter? appears in the April 2017 issue of the American Economic Review.

What policies can keep health insurance markets from going down the drain?