What policies can keep health insurance markets from going down the drain? 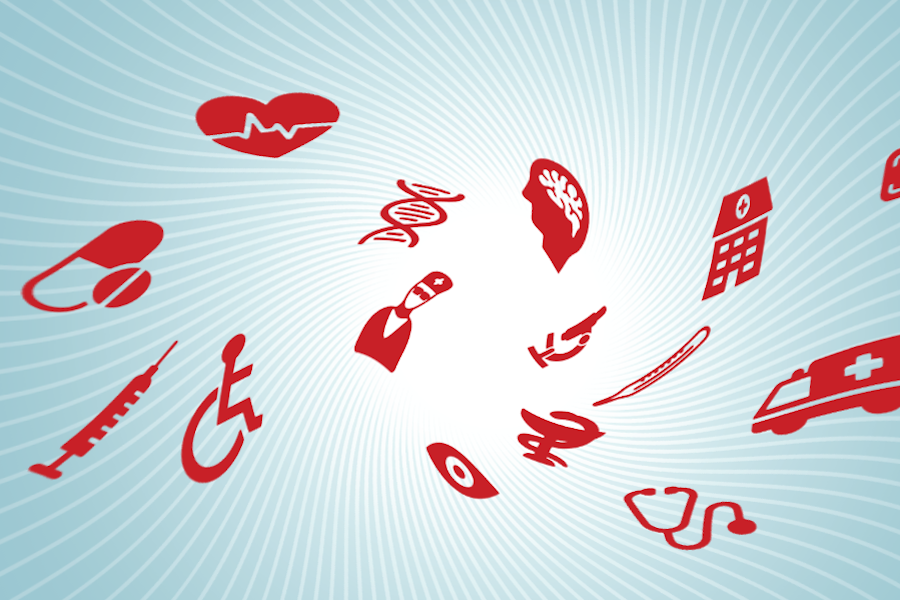 That was President Donald Trump’s dire prognosis for the health care exchanges established under the Affordable Care Act, delivered Wednesday at a speech in Nashville. His comments echoed similar warnings by congressional Republicans and health insurance executives that the marketplaces are on the brink of collapse.

Why are the exchanges collapsing, according to critics? Too many sick people and too few healthy ones are signing up for insurance, setting off an adverse selection “death spiral” that could result in insurers pulling out of the markets.

Under the Affordable Care Act, insurers are not allowed to refuse coverage or charge higher premiums to customers who have chronic illnesses like cancer or diabetes – “pre-existing conditions” in the parlance of health insurers.

This is a pretty popular aspect of the bill, because it ensures that people won’t be locked out of insurance markets when they need care the most. But it leaves insurers with only one option if the customer pool gets sicker: raise premiums for everyone, healthy and sick.

This ensures that everyone has equal access to care, but it can make health insurance a pretty bad deal for the healthiest customers who know that most of their premiums will go to pay for other people’s care. Some healthy people might decide to take their chances and go without insurance if prices rise too high.

This in turn makes the insurance pool sicker on average, leading to higher premiums and potentially a vicious cycle where more and more people leave the pool and only the sickest remain.

Too many sick customers can doom a health insurance pool
Breakdown of health expenditures in 2014 by self-reported health among non-elderly adults in the U.S. These totals include both out-of-pocket payments and spending on behalf of patients by insurers or the government. The least healthy segments of the population aren't very numerous, but naturally they rack up much higher bills. 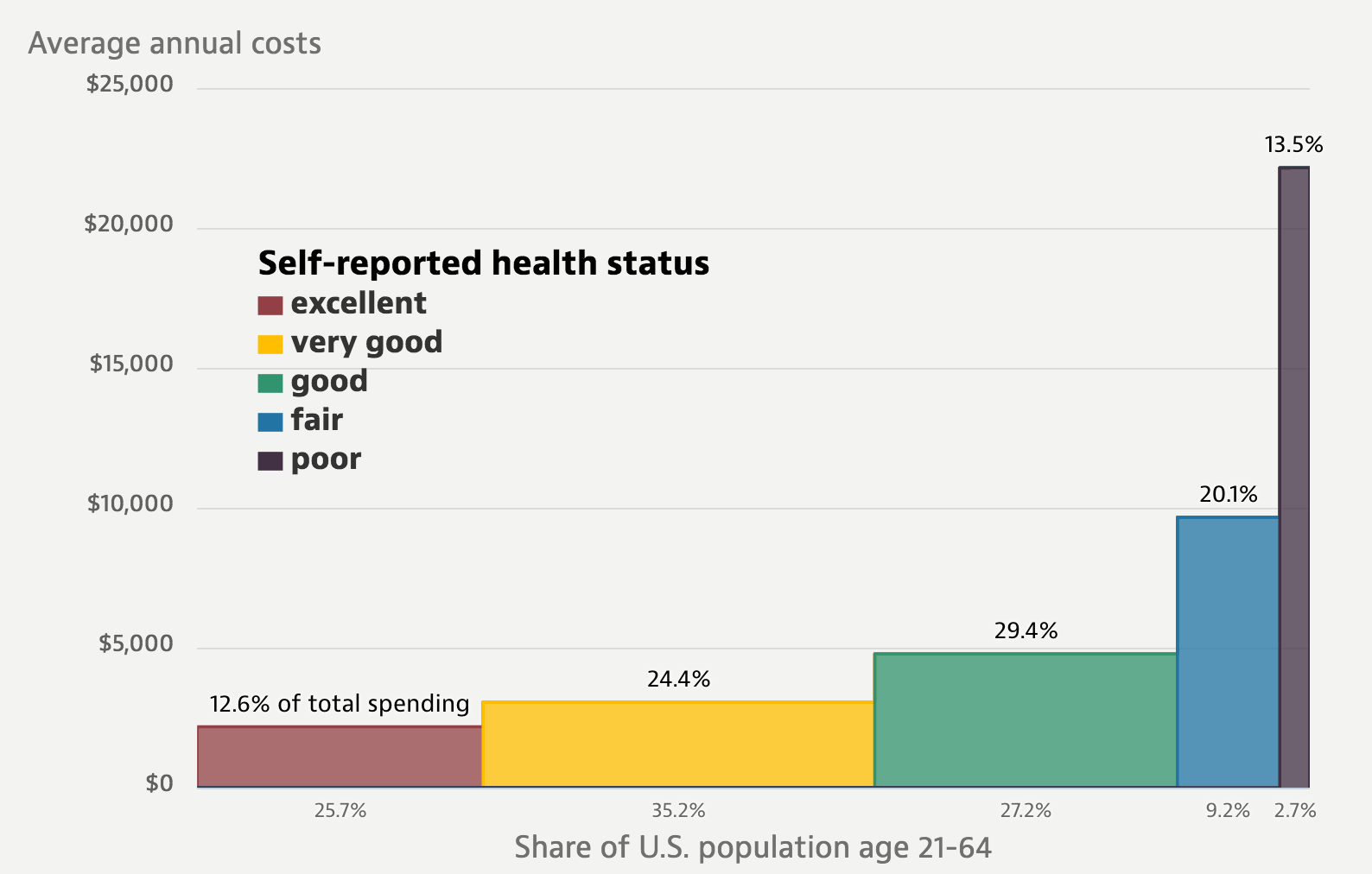 It doesn’t take too many people with sky-high expenses to start destabilizing a pool. As Aetna CEO Mark Bertolini pointed out in January when he announced the company was considering withdrawal from the exchanges, the most expensive one percent of customers were responsible for 50% of the costs in some of Aetna's pools. That forces premiums up, making insurance less appealing to healthy customers and potentially setting off a death spiral.

Whether the ACA exchanges themselves are on the brink of a death spiral is debatable. Some exchange markets have seen premiums rise and insurers depart, but the Congressional Budget Office predicted that markets would stabilize in most areas even without changes to the law.

The broader point is that one customer’s health insurance plan doesn’t exist in an economic vacuum. Your prospects for getting insurance depend on who else is in the pool with you, so legislators have to be careful. A seemingly unrelated policy change could flood the marketplace with sick people, or shore up the pool with young customers in the pink of health.

Jeffrey Clemens, an economist at the University of California, San Diego, has studied how different health policies can interact, sometimes with unintended consequences.

“I think that the health-reform debate and its liveliness within policy circles has made people appreciate how a number of policy instruments relate to one another,” said Clemens in an interview with the AEA. Raising the Medicare eligibility age, for example, could alter the complexion of ACA health insurance exchanges and potentially lead to a premium spike.

“Imagine the thought experiment of increasing the Medicare retirement age from 65 to 70,” said Clemens. “Then you have a bunch of 65-to-69 year olds looking for insurance on the exchanges.” These people will tend to have much higher health costs than the average person of the exchange, pushing premiums up for everyone in the pool.

Likewise, the provision of the ACA allowing children to stay on their parents’ plans until age 26 deprives the insurance exchanges of a pool of young customers who are healthier than average and could help balance out the high costs of older customers and forestall a death spiral.

Clemens studied what happened in the 1990s when a few states tried to set up community-rated insurance pools. These were precursors to the ACA’s exchanges that also prohibited insurers from discriminating or charging different prices on the basis of a customer’s health.

I think that the health-reform debate and its liveliness within policy circles has made people appreciate how a number of policy instruments relate to one another.

These states “went all in on the pre-existing conditions rules without [also] introducing additional policy instruments that the ACA brings into the picture to try to prevent” a death spiral, explained Clemens. The Affordable Care Act includes premium subsidies and a tax penalty for those who don’t anticipate to try to combat the adverse selection problem, but these state exchanges did not have similar rules.

It didn’t work too well in many cases, with some states abandoning their exchanges after a few years or switching to rules where insurers could charge slightly more for sicker patients. But some states saw greater participation in their exchanges.

This period coincided with an expansion of Medicaid programs in several states, with each state managing its own expansion under its own rules. Clemens finds states that selectively expanded Medicaid to cover a disproportionately unhealthy population – New York was especially adept at this – generally had more success with their community rating pools.

This presumably happened because some of the highest-cost customers exited the market, allowing insurers room to lower premiums and attract people who were on the fence about joining the pool. Less upward pressure on premiums would have translated into less adverse selection pressure and better-functioning insurance pools.

This offers an implicit cautionary tale for the latest round of health reform. There isn’t a perfect parallel between today’s ACA exchanges and the community-rating pools of the 1990s. But it’s reasonable to expect that cuts or changes to Medicaid that dump unhealthy people back into the state exchanges could imperil the health of those plans, for sick and healthy alike.

Regulatory Redistribution in the Market for Health Insurance appears in the April 2015 issue of the American Economic Journal: Applied Economics.