Michael Geruso discusses why some US presidential candidates win with fewer votes. 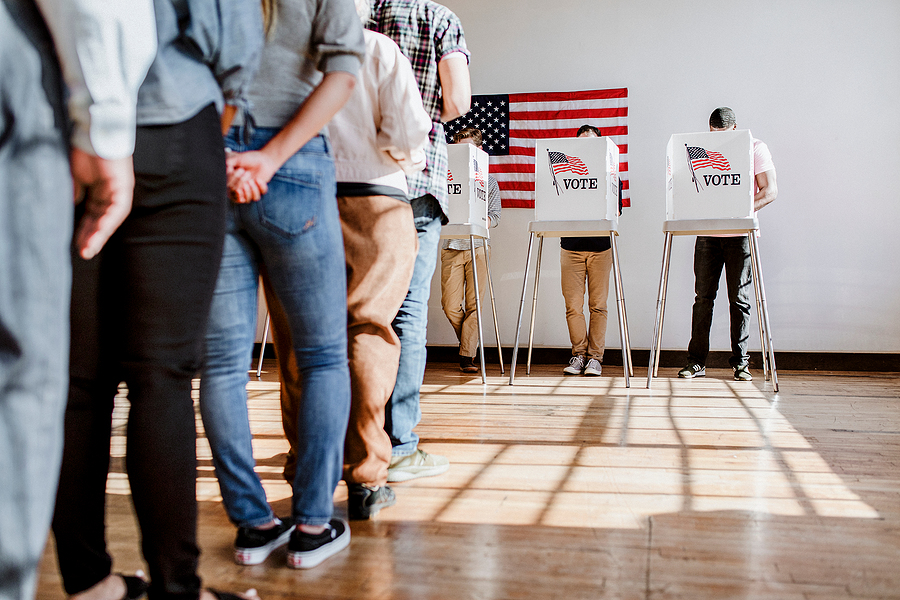 Only four times in US presidential history has the candidate with fewer popular votes won the election. Two of those occurred recently—in 2000 and 2016, leading to calls to reform the system.

Far from being a fluke, this peculiar outcome of the US Electoral College has a high probability in close races, according to a paper in the American Economic Journal: Applied Economics.

Authors Michael Geruso, Dean Spears, and Ishaana Talesara say that regardless of changes in demographics and institutions, the odds of so-called inverted elections in close races has been about the same over the last 200 years.

Geruso says that while Republicans benefit today from the chance of an inverted election, it hasn’t always been that way.

He recently spoke with Tyler Smith about why the Electoral College causes inversions and what he thinks about moving to a national popular vote.

Tyler Smith: One of the things your paper does is look at a broad span of presidential elections. What did you find when you took that broad view of history? How does it complicate the picture of presidential outcomes for a modern voter?

Michael Geruso: If you think about the mindset of a voter in 2000 going into the Bush v. Gore election, there hadn't been an inversion—a case where the Electoral College and the popular vote didn't match—in over 100 years. The possibility that that would happen was not top of mind. It really begs the question of whether the events in 2000, Bush v. Gore, and in 2016, Clinton v. Trump, were just statistical anomalies that we shouldn't expect to keep happening? Or was the statistical fluke the case that we hadn't had an inversion in over a century prior to 2000?

Smith: There are two other inversions, both in the post-Reconstruction era, the period between roughly 1870 and 1890. It feels like it's more than a coincidence that you get two inversions in that 20-year window, then in a 20-year window recently. Do these periods have something in common that produced more inversions?

Geruso: The answer, pretty simply, is that we were very likely to have close elections in that period, and we were very likely to have close elections in the modern period. And that fact is really enough to expect to have frequent inversion events. To put some numbers on this in our paper for elections decided by a margin of one percentage point or less—so in 2020 a difference of a million and a half votes in turnout between the winning and losing candidate in terms of the popular vote, the probability of an inversion is about 40 percent. If the election is within a million or so votes, it's basically a coin flip who is going to win the election. In other words, knowing who won the popular vote is basically uninformative about who will win the presidency, even when more than a million votes nationally separate the candidates.

Smith: I want to ask how this inversion probability changes over time, because institutions in the US have changed a lot over the last 200 years. How stable has this probability been?

Geruso: We estimate these back-casted models of probable presidential elections over different eras of American politics starting in 1836. Looking at the models of elections then and models of elections in every period since then, up to the present day, it has been a stable and robust fact that the statistical probability of an inversion as a function of the popular vote margin has been the same. This has been an incredibly stable fact of the American electoral system. As long as there's been a popular vote to compare to the Electoral College outcome, there has been a very high probability of an inversion in a close race.

Smith: Looking at the modern era, why are Republicans benefiting now?

Geruso: Part of that answer has to do with the fact that the Electoral College apportionment includes the two senators. You have these low population states like the Dakotas, Alaska, Wyoming, [and] Montana, where Republicans are more likely to win and because a fewer number of citizens’ votes transfers to an Electoral College vote in these states, there's a built in advantage for any party that wins small states. And currently the Republican Party is more likely to win small states.

But another quantitatively more important explanation, which operates alongside this, is the winner-takes-all awarding of votes by states. A candidate that wins just shy of a majority of the state's vote gets zero Electoral College votes in the final tally, whereas the candidate who wins just the barest majority gets all the Electoral College votes. That doesn't mean that we should expect an advantage to any particular party. But in practice, in the last several decades, when Democrats win large states, they tend to win those large states by large margins, and when they lose them, they tend to lose them by small margins.

It was our goal to help in our small way better inform the public and political actors about the likelihood of inversions events. If you think that the reason we should reform the system is to avoid inversions or legitimacy crises, then it makes sense to have some quantitative measure of how often you should expect these events in the absence of reform.

Smith: In the other period where we see these inversions, the post-Reconstruction era, Democrats benefited, but they benefited in different ways. Can you explain what caused these inversions to occur then?

Smith: How do you think about the tradeoffs between the Electoral College system and a national popular vote system?

Geruso: I really want to emphasize the point that this is really about the Electoral College; that's the big takeaway from our work. What we should do about that is, in part, a question of values and individual judgment. But if you think that it's a problem that the popular-vote winner doesn't become president all the time, then there really is only one solution—and that's moving to a national popular vote. That's a solution that's both very simple and very complicated. It's simple in that we know what the technical answer to this question is: it's the national popular vote. But of course, it's complicated because it's very hard to imagine the political coalition that would come together now or in the next handful of years to make that happen.

It was our goal to help in our small way better inform the public and political actors about the likelihood of inversions events. If you think that the reason we should reform the system is to avoid inversions or legitimacy crises, then it makes sense to have some quantitative measure of how often you should expect these events in the absence of reform. Are these just a flash in the pan and are they going to go away after our current moment of political turmoil? Or are these rock solid, core features of what the Electoral College does? What we find is that it's the latter. We shouldn't expect things to be any different in the coming years because this is an outcome that the Electoral College mechanically generates.

“Inversions in US Presidential Elections: 1836–2016” appears in the January 2022 issue of the American Economic Journal: Applied Economics. Music in the audio is by Podington Bear.

Getting the best election candidates

Are voters better off choosing directly or delegating to party leaders?