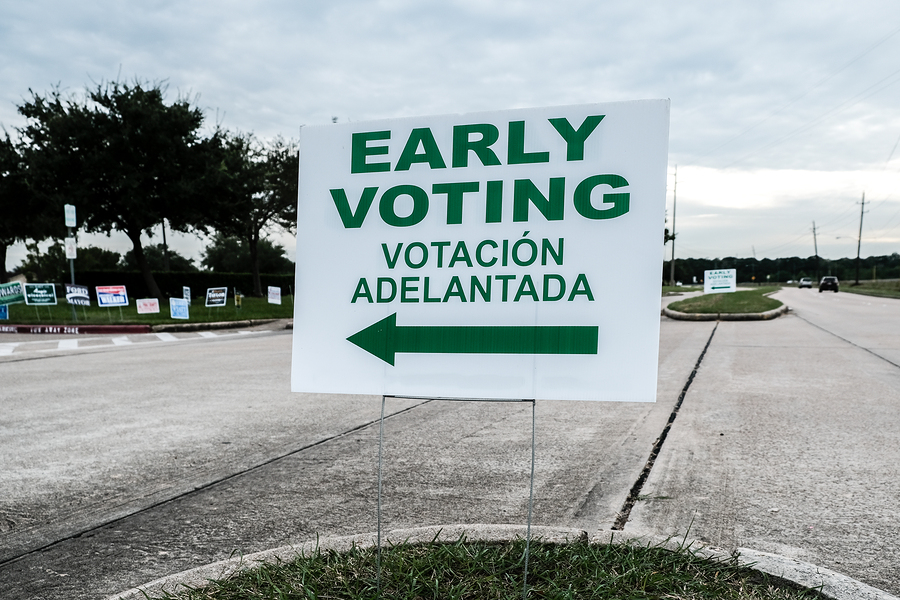 An early voting station for the 2018 general election.

Political analysts are anticipating huge voter turnout for the 2020 election.

And yet, even with a hotly contested race at a time of intense polarization, tens of millions of Americans will never cast a ballot. If 60 percent of eligible voters make it to the polls, it would be the highest turnout for a presidential election in a half century.

One way to improve those numbers would be to expand early voting. A paper in the January issue of the American Economic Journal: Applied Economics says that even one extra day of early voting would lead to a meaningful boost in turnout, especially for women and parents with young families. It could also lead to a less polarized electorate by bringing more independent voters to the polls.

“The effects are large enough to impact control over our political institutions, said co-author  Ethan Kaplan in an interview with the AEA. “So we should think about what are the fair ways for people to have access to voting, because it does matter.”

The US trails most developed countries in voter turnout, and the paper comes as states across the US battle over issues like voter ID laws, automatic voter registration, and mail balloting that could affect access. Republicans have sought to tighten restrictions in many instances, citing concerns over election rigging, while civil rights advocates and some researchers have said these laws amount to voter suppression that disproportionately affects Black and Latino voters.

It’s been difficult to measure the impacts of some of these laws, nationally, because there are so many demographic and political variables that shape voter behavior differently across states.

Kaplan and co-author Haishan Yuan focused on how early voting reforms in one state—Ohio—affected who cast their ballots.

Early voting access
Rules governing when people can vote vary widely from state to state. The map below shows the range of periods in which voters can cast their ballots in-person. Nine states do not offer pre-Election Day voting.
Source: National Conference of State Legislatures (2019)

In 2012, the Republican-controlled Ohio legislature passed a law that homogenized the process across all counties, creating the same exact hours and days for rural and urban areas alike. The result was to reduce hours in most counties, especially more Democratic-leaning urban counties like Cuyahoga and Franklin. Between 2008 and 2012, only two counties increased the number of days of early voting. By contrast, 20 counties decreased early voting days.

Demographic differences again make it difficult to measure effects in urban and rural parts of the state. So, the authors zeroed in on voters from neighboring communities who lived along either side of a county border, people who were more likely to share certain demographic features, like education and income levels. Thus, any difference in their voting behavior was more likely to be how their counties were differently affected by the reform, rather than some other factor.

[W]e should think about what are the fair ways for people to have access to voting, because it does matter.

The results were significant. Overall, the authors found that an extra day of early voting increased turnout by 0.22 percentage points. Most affected were young people in their 20s and 30s, and women, who reacted 30 percent more strongly than men to the change.

Early voting didn’t affect Republican voters much at all, while Democrats are slightly more likely to turn out to vote in presidential elections when early voting is more available. The biggest effects, however, were on independents, who were much more likely to take advantage of early voting.

If independents are assumed to be less strident and more moderate than party-affiliated voters, then the results suggest that expanding early voting access could lead to a less polarized electorate.

The effects are also large enough to suggest a major shift in the partisan composition of US government. A national law of 23 days of early voting (as in Ohio) could have altered the outcome of the 2016 presidential election and also majority control of the Senate in the 2012 election. If it were expanded to 46 days, as it is currently in Minnesota, early voting  would have swung majority control of the Senate to the Democratic Party in 2016.

Kaplan said these results underscore the importance of voter access and the government we ultimately elect.

“I think it does point to this notion that more access to voting will create a government more representative of the citizenry,” he said. “And a given level of access differentially selects certain people to vote and  a lot of people who end up not voting.”