Getting the best election candidates

Are voters better off choosing directly or delegating to party leaders? 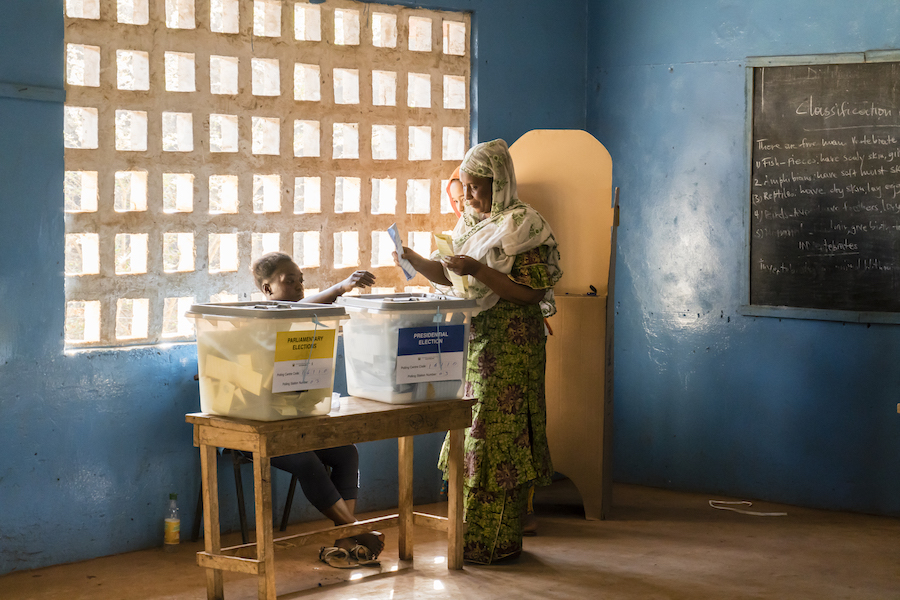 A woman casts her ballot in Sierra Leone's elections in March 2018.

Unlike in the United States where voters can signal their leadership preferences in primaries, political party leaders in the West African nation of Sierre Leone handpick the people who appear on the ballot. In regional strongholds where one party dominates, this essentially allows parties to choose the parliamentarian.

“[Voters] are perfectly enfranchised on paper because the general election is free and fair, but in practice, they're largely irrelevant because the parties choose the candidate, who is then very likely to win the general election,” Stanford economist Katherine Casey said in an interview with the AEA. “So in a stronghold, it's not just that the party is picking the candidate, it's that the party is picking the elected member of parliament with voters having very little input.”

In a paper in the American Economic Review, Casey and coauthors Abou Bakarr Kamara and Niccoló Meriggi say that introducing a primary system for a randomly selected subset of races in Sierra Leone boosted the likelihood that voters got their most preferred candidates. The results of their experiment offer hope for empowering voters and improving representation in newer democracies with relatively simple reforms.

There were two important questions the authors wanted to investigate. They wanted to know the extent to which party leaders’ choices aligned with everyday voters’ choices, and also who was in a better position to choose effective candidates. It could be that better informed party officials would choose better candidates who would work in the best interest of their constituencies; or it could be that leaders use different criteria unrelated to performance in office.

The authors partnered with both major political parties in a novel experiment for the 2018 parliamentary elections. A total of 46 races out of 132 constituencies nationwide participated. A random subset of those races incorporated a more US-style primary system, where aspiring candidates presented their qualifications at a party convention that was broadcast to local residents over the radio. The authors followed up with opinion polling to gauge voter preferences, which were then shared with party officials in a one-page report.

A political experiment
The graphic below shows the authors' experimental design to gauge whether voter preferences for candidates aligned with what party officials wanted. 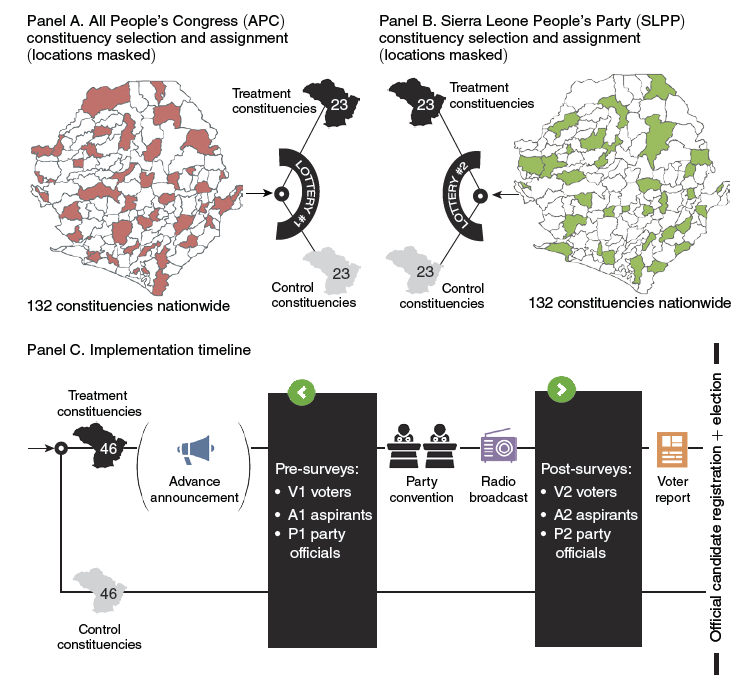 The authors discovered that, under the status quo, party leaders selected voters’ first choice only 38 percent of the time—a shockingly low rate. The rate increased by 23 percentage points to 61 percent in races where parties received information about voter preferences following the convention and polling.

Importantly, more than half of these races were in regional strongholds, where party leaders could have easily ignored voters’ preferences with little risk of consequence, since whoever they chose was probably going to get elected. The experiment showed that leaders were actually willing to choose a candidate whom local residents preferred. A back-of-the-envelope calculation suggested that party officials chose a different candidate than they otherwise would have picked in 11 races, changing the identity of six elected parliamentarians.

“That's a really big increase in terms of representation,” Casey said. “And because more than half of them are in a stronghold, that's changing not only who the candidate is but who the elected member of parliament is, too.”

More surprising, however, was the reason why party leaders’ and voters’ choices of candidates diverged. The authors originally thought it likely that it was because the two groups had very different ideas about the qualities that made for a good candidate. The data showed otherwise.

Both voters and officials preferred candidates who were more conscientious and had a stronger record of providing local public goods, such as involvement in small scale public infrastructure projects.

So, it wasn’t that party leaders were consciously ignoring the will of the people—it seemed more likely that they just didn’t know what voters wanted. It was an information problem.

The fact that the parties were willing to try something new is reason to be optimistic about improving the electoral process in emerging democracies like Sierra Leone, Casey said. Moreover, the candidates who were chosen under this new primary system had stronger records of public goods provision, something that both voters and party leaders appear to value.

Elections are expensive. Fortunately, this experiment showed one way to better align party leaders with voters without having to do a massive overhaul of the process.

“The electoral process has many stages and there are lots of links that can be tightened up so that the overall election performs better in delivering representative, high-quality, high-performing candidates,” Casey said. “There's a lot of scope for experimenting and learning at different points in the electoral chain, figuring out what can make it work better for citizens in these newer democracies.”

“An Experiment in Candidate Selection” appears in the May 2021 issue of the American Economic Review.