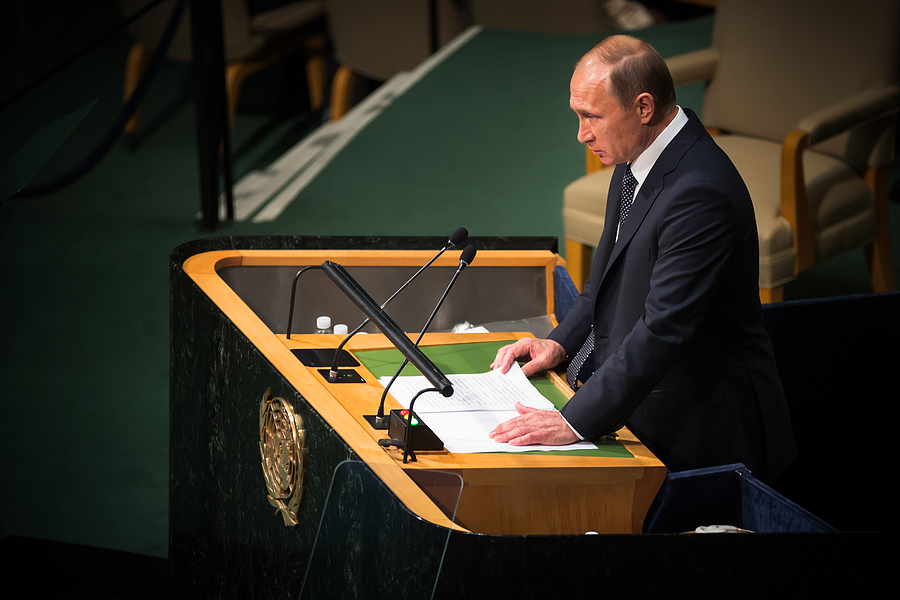 Russian President Vladimir Putin speaks at the opening of the 70th session of the General Assembly of the United Nations.

The world has been adjusting to the information age for the last 50 years now. And so have its autocracies, according to our guest today.

Daniel Treisman, political scientist at UCLA, says that illiberal leaders are building modern authoritarian regimes with a new set of tools to keep themselves in power.

In the Fall 2019 issue of the Journal of Economic Perspectives, Treisman and his coauthor Sergei Guriev described these so-called informational autocrats, which no longer terrorize their citizens like traditional autocrats—if they can avoid it.

Instead, these dictators suppress wide-spread knowledge of their own incompetence and criminal activity by manipulating major media outlets, disguising themselves as democracies, and hiding their violence.

In such an atmosphere, unflattering stories about leaders tend not to reach the general public.

Professor Tresiman recently spoke with the AEA’s Tyler Smith about how informational autocrats retain their power, why they had to adapt, and how new coalitions may be able to fight back.

Tyler Smith: What is an informational autocrat?

Daniel Treisman: In my work with Sergei Guriev from Sciences Po in Paris, we try to understand the new types of dictators, authoritarian leaders that we see around the world. In the mid 20th century, the typical dictator was extremely violent. They ruled through fear, through violent repression, often on a mass scale. We think of leaders like Stalin and Mao and Hitler killing millions, if not tens of millions of people, and also ruling with the help of a quite complicated ideology that was imposed on the population.

Sergei and I noticed we were seeing a different model of authoritarian control. We think that the ultimate goal is often the same: to consolidate power, to remove all checks on the central decision maker, to disempower civil society or any groups in the population that might threaten the control of the dictator. But these dictators are operating in different ways. They're using much less violent repression. And we collected a bunch of data to check this and document this. But they're responsible for fewer state killings of opponents of the regime. They are imprisoning fewer dissidents and fewer political prisoners. In place of that, we believe they're achieving the same ultimate objective by means of manipulating information.

Smith: Can you give me some examples?

Treisman: We see this in Russia with President Vladimir Putin, especially in the early years. He’s become slightly more violently repressive now, but still, the number of political prisoners is quite low. Definitely very low compared to most 20th century dictators. And the level of political killings also is quite low. . . . We see [former Prime Minister of] Singapore, Lee Kuan Yew, as having been a real pioneer of this model. He started one way, but very quickly he developed all the features of what we now see as informational autocracy. He was quite influential during his life in spreading the knowledge about how to be a more effective authoritarian leader to the various autocrats who sought his advice.

Smith: It's surprising to me that these autocrats are able to persuade so much of their population. What is it that makes them so appealing to most of their citizens?

Treisman: Well, there are several elements to that. First of all, as anywhere, the economy is hugely important—and that's besides any manipulation of information. Of course, it's much easier to be popular if you're actually a good manager or if you have good luck and your economy does well. But then how do you remain popular even when times are bad? [You can], in part, if you're able to persuade people that any problems in the economy are really caused by external forces, by bad luck, by negative conditions elsewhere. So a lot of propaganda focuses on explaining away disappointing outcomes.

At the same time, there's careful monitoring and control of opposition mass media communications. Basically opposition is allowed, or opposition minded people are allowed, in a small sphere of media to communicate among themselves. Small circulation newspapers, minor publications on cable channels, that sort of thing is recognized not to be a threat to the regime so long as the mass media are controlled either directly or indirectly, as in Singapore.

Smith: Is this similar to the way that some leaders malign certain news outlets and call them fake news?Treisman: Yes, I think that's one thing that informational autocrats do. We see in Latin America under Rafael Correa in Ecuador and under Alberto Fujimori in Peru, the opposition press and opposition journalists were called all sorts of names—they were accused of fabricating stories, accused of disloyalty, and so on. . . . Probably a more effective strategy, which I think is closer to what Lee Quan Yew used, is to just try and suck out all the oxygen from alternative news and ignore them completely, limiting their circulation. Formally, perhaps, allow critical news stories, but limit their access to the general public.

Ultimately, organization and communication is the way to defeat an informational autocrat.

Smith: More and more of our information is now moving through social media platforms like Facebook. I'm wondering if these platforms are making it easier or harder to pull the wool over the public's eyes in informational autocracies?

Treisman: The impact of the Internet and social media is complex. I don't think we fully understand it yet. . . . I think one consequence of the Internet and social media is to push people from the old type of dictatorship of the 20th century into informational autocracy. . . . It makes it harder to keep control of the narrative just by controlling central state media or the main TV channels. There are many other sources of information. So there's that. But at the same time, there are countervailing forces. . . . [If] everybody has a smartphone in their pocket, everybody can be tracked. The Internet creates, or inspires people to create, technologies that can be used to monitor, to surveil, to basically know everything you need to know about opposition or potential opposition movements, which then enables the authorities to disable them before they even get started. . . . I think where this ends up, which effect ends up dominating will depend on just how much effort and talent goes into developing the different potentials of this technology.

Smith: What kind of tools do those trying to resist informational autocrats have at their disposal? How can they fight back?

Treisman: Ultimately, organization and communication is the way to defeat an informational autocrat. To forge a coalition between what we call the informed elite part of society that has the informational resources to look critically at what's going on—the part of the society that isn't fooled by the propaganda and exploits the opportunities available on the Internet and other sources of information to accurately evaluate the situation. So what's needed is to forge a coalition between that informed elite in our terms and the general public, which is less interested in politics, less politically mobilized, less politically knowledgeable, and more susceptible to the quite appealing kinds of pro-regime propaganda that they see in the state-directed media.

How to build that sort of coalition comes down to innovative media strategies for oppositional media, innovative organizational strategies, forming grassroots organizations, and then providing alternative narratives and finding new ways to get them to the general public.

"Informational Autocrats" appears in the Fall 2019 issue of the Journal of Economic Perspectives. Music in the audio is by Podington Bear. Subscribe to the monthly Research Highlight email digest here.