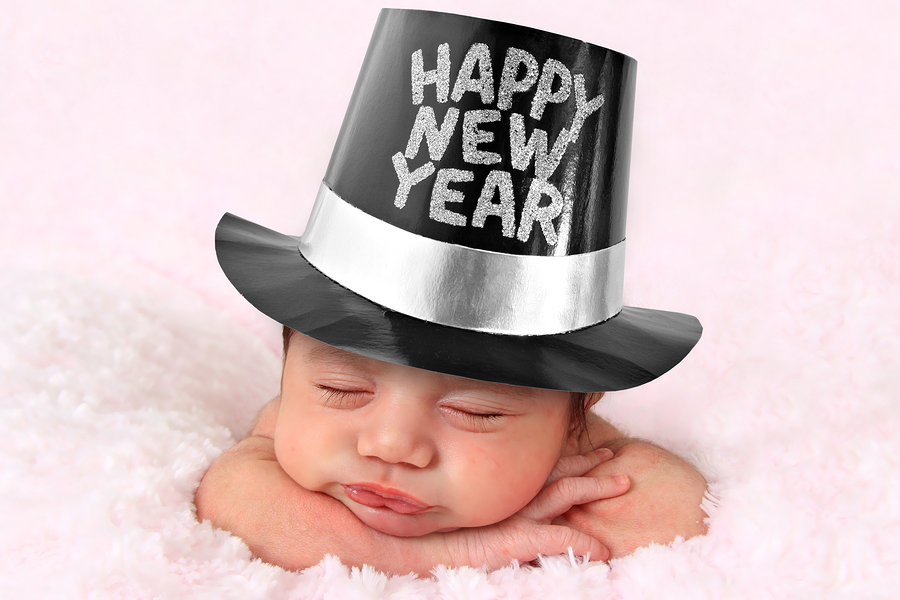 A baby born New Year’s Eve can save parents a bundle on their taxes, relative to one born in the new year.

The tax code can make people do funny things. They live in bigger houses, stash money in offshore havens – even acquire goat herds to qualify for farmstead tax breaks. Taxes clearly affect how we live our lives, but can they affect how long our lives are?

The evidence says that tax incentives loom large even in matters of life and death.

One study found that when the Australian government offered a $3,000 “baby bonus” taking effect July 1, 2004, that day had more births than any day in the previous thirty years, presumably because births that might otherwise have occurred in late June were successfully postponed into July.

Another study of U.S. estate tax changes found evidence that deaths were accelerated or postponed slightly around dates when key changes took effect (although the authors acknowledge this could be due to falsified death certificates rather than manipulation of the actual time of death).

And a 1999 study found a substantial impact on births right around New Year’s Day. A baby born on the last day of December qualifies as a dependent for tax purposes for the entire year and can save parents thousands of dollars the following April. That study found that an additional $500 of tax benefits increased the chance of a December birth by over 25%.

Some of these results have been greeted with skepticism though. Do people really let tax considerations intrude on intensely personal moments in their families’ lives?

In a recent study appearing in the American Economic Journal: Economic Policy, authors Sara LaLumia, James Sallee, and Nicholas Turner look at a massive and detailed database of U.S. tax records covering 800,000 births within a week of the New Year to see if they can find corroborating evidence of tax-optimal birth timing. They find that this effect isn’t as big as previous studies say, but it’s still there.

Tax returns don’t say anything about whether a baby is born during a scheduled C-section procedure or if labor was induced on a pre-arranged date, so there is no direct evidence of birth timing manipulation. To detect whether people are shifting births to save on taxes, the authors examine each family’s tax situation and figure out how much a December birth would save them.

How much is your newborn chipping in at tax time?
Approximate tax savings attributable to the birth of a first child for a married couple living in Virginia under 2005 federal and state tax laws. A birth pushed into late December allows parents to claim these savings a year earlier. 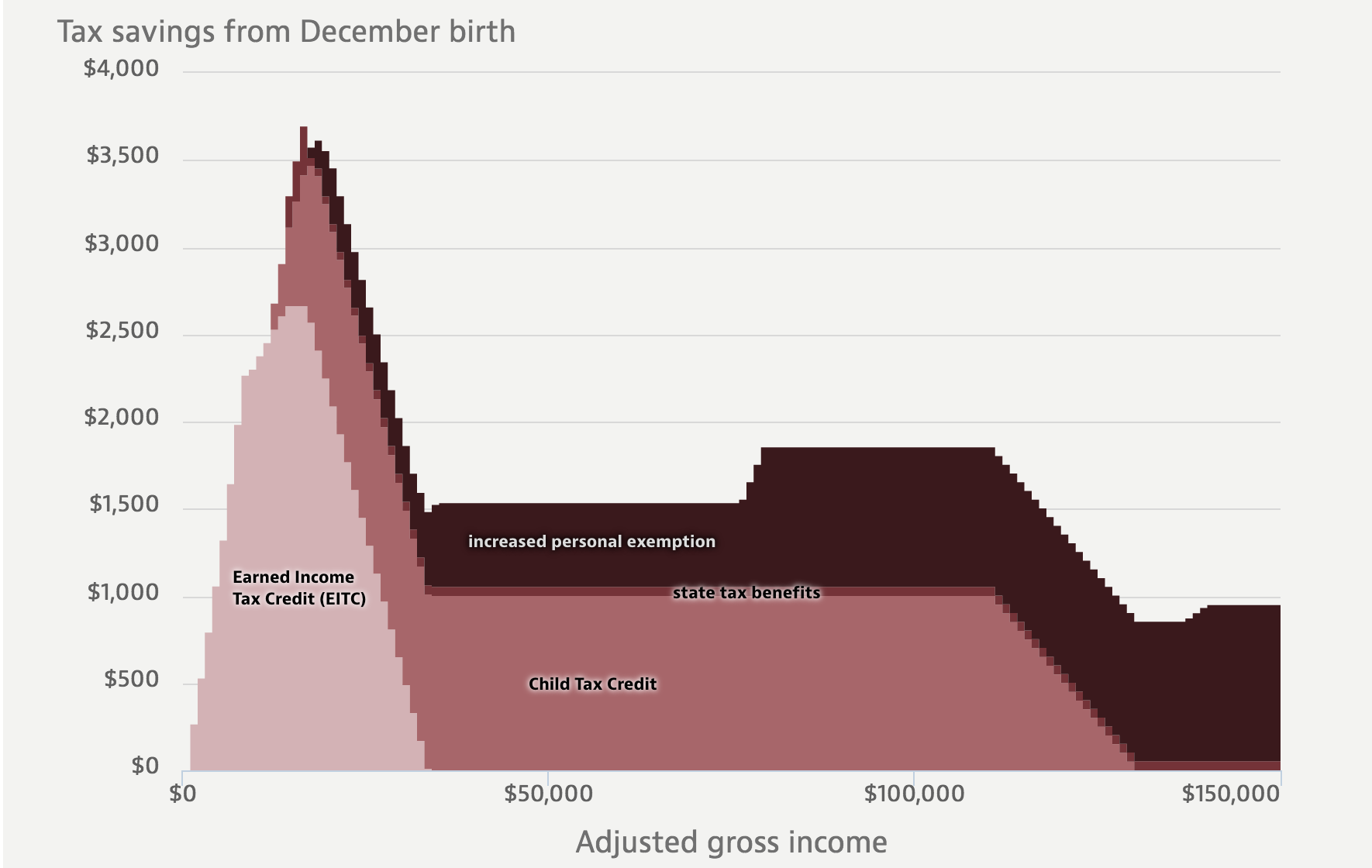 It varies for each family because there are certain sweet spots in the tax code where adding a newborn to the family – especially a first child – can save a lot (see figure above). Lower-income filers with adjusted gross income (AGI) around $20,000 benefit because the earned-income tax credit expands when families add more children. Higher-income households earning $80,000 to $110,000 can still take advantage of the child tax credit and get a lot out of the increased personal exemption given their higher tax rates.

If birth timing around the New Year has nothing to do with taxes, then babies born in the last week of December and the first week of January should look alike in terms of how much they save families on taxes. But the authors find that the babies born in December were more likely to be born into families that stood to gain a lot from a new birth at tax time, and it's not likely to be a pure coincidence.

Still, the overall effect size is small, suggesting that only a small fraction of expectant parents are actually taking steps to manipulate birth timing at this time of year, according to Sara LaLumia, one of the authors on the study.

“There are some people out there who are maybe saying to their doctors 'I care about these tax benefits, I want to have my C-section scheduled for December 31st,' but we think it's a small segment of the population,” said LaLumia in an interview with the AEA. “It would have to be somebody who is pretty savvy about the tax code,” like an accountant or tax preparer.

Economists fret about the tax “distortions” that occur when taxes motivate people to do things they wouldn’t find worthwhile if not for the tax, and birth manipulation is no exception. The extra money the government has to pay out in tax refunds is less of a concern than the prospect that this behavior could actually be leading to health problems for some newborns.

There are some people out there who are maybe saying to their doctors 'I care about these tax benefits, I want to have my c-section scheduled for December 31st,' but we think it's a small segment of the population.

And that could be happening, according to recent research. Pushing a birth up into the 37th or 36th week of gestation can pose health risks, according to a 2009 study published in the New England Journal of Medicine. Another recent study also looking at birth timing around the New Year’s holiday found that even one or two days’ distortion in birth timing could lead to lower birth weights and Apgar scores.

Then again, the potential health risks might help explain why most people don’t seem to engage in this practice. People will go to great lengths to save on their taxes, but some things are just too important.

“It's probably not surprising to people that, sure, there might be some health problems associated with choosing a birth date for a reason of convenience or for reasons of reducing your taxes,” said LaLumia. “And even if it is a vague concern, people care a lot about the health of their children. . . . that potential negative consequence could loom large in people's minds.” ♦

New Evidence on Taxes and the Timing of Birth appeared in the May 2015 issue of the American Economic Journal: Economic Policy.

What online searches reveal about how people think about taxes