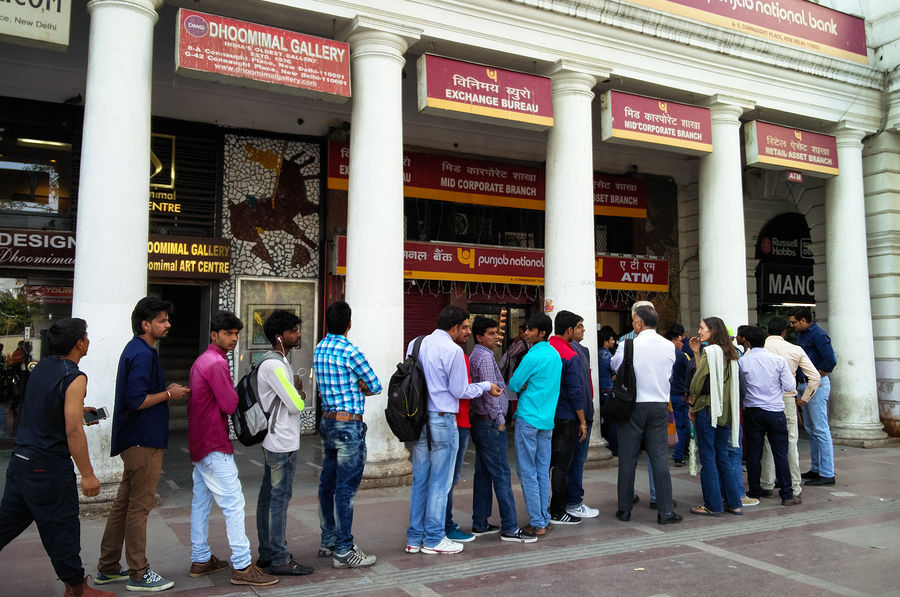 Sharing a similar culture as a branch loan officer helped borrowers in India get bigger loans with better terms.

Lending decisions should be based on cold, hard facts.

That’s what people in the industry tell us, anyway. Credit history, documentation of employment, income, assets, and cash on hand. All the information a bank officer would need to make an unbiased decision, one that is mutually beneficial for the lender as well as the borrower.

But, it turns out that lenders use “soft information” about a person’s culture, too. What’s more — that’s not always a bad thing, according to a paper published in the February issue of the American Economic Review.

When bank officers have a similar cultural background to borrowers, their shared language and beliefs can actually lead to better lending relationships with a lower risk of default, according to the paper’s authors Raymond Fisman, Daniel Paravisini, and Vikrant Vig. Not only do the borrowers get more generous credit, but the loans are more profitable for the bank.

The study highlights how social ties influence certain transactions and whether what the authors call “cultural proximity” — shared customs, language, and religion — can be a force for good or ill. The findings offer an upside to cultural affinity that surprised even the authors.

“It’s certainly not a result that I anticipated getting,” Fisman said.

But it also underscores a challenge facing individuals who constantly find themselves in the minority.

The researchers studied lending practices at a large bank in India and found strong evidence that branches lent more money — with less collateral — to people who shared the same religion and social status with the head branch officer. A Christian loan officer from the “general class,” for example, is likely to extend more generous credit to a Christian borrower of the same class.

It’s certainly not a result that I anticipated getting.

The authors noted an immediate impact whenever branch officers were transferred to a new location — common in India, as banks rotate managers periodically.

When the lender and borrower belonged to the same group within India’s caste system, the total amount of new loans to that group increased 6.5 percent. Also, the number of new loan recipients increased 5.7 percent and the probability that someone in that group would get any amount of credit went up by 2.5 percent.

But this wasn’t just bank officers favoring their own people at the expense of the institution. The banks benefited as well.

Loans made to these “in-group” borrowers perform better. The borrowers were less likely to be late in their payments or default on their loans. This “cultural proximity” between the lender and the borrower boosted the bank’s bottom line.

Why? The authors think that it has something to do with better communication between the parties. Sharing language and customs gives a loan officer more information about a borrower, which helps him better evaluate a borrower’s circumstances and ability to repay the loan. It also might help later on when collecting on the debt.

The benefits to the bank lasted well beyond the branch officer’s tenure. Repayment rates for those loans stayed the same even after the officer was replaced by someone else.

The implications for “outside” groups are mixed.

Brother, Can You Spare a Dime?
When a new head loan officer took over at a bank branch, borrowers who shared the same culture as the officer and became the "in-group" gained access to more generous credit. Meanwhile, the "out-group" -- people with different backgrounds -- either had no change or declined as a share of new debt. The chart below shows what happened when a new officer arrived at a branch of a large Indian bank. The shaded area represents the change in leadership. 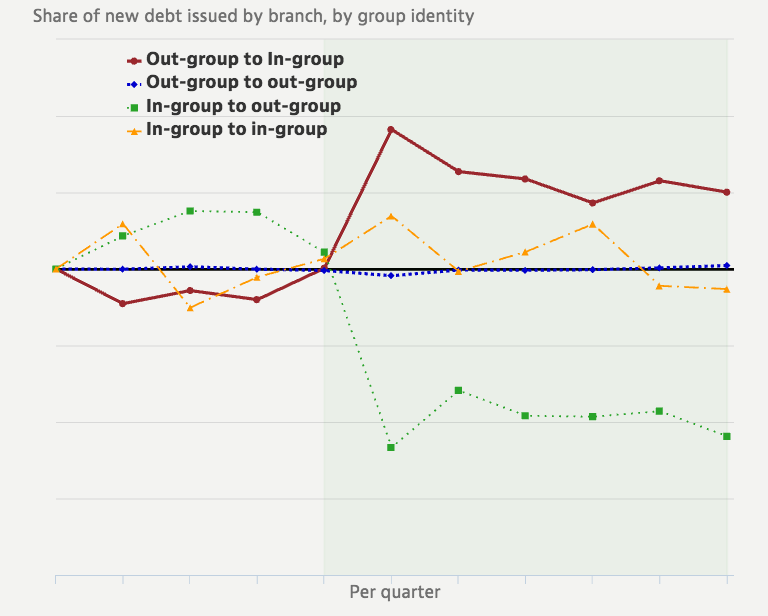 There was no change when borrowers who were in the outside group stayed that way with a new officer at the helm. But new loans made to “in-group” borrowers — those with the same religion and caste as the lending officer — declined immediately when an officer of a different cultural background arrived.

One implication is that banks might want to leave an officer in place for longer if they share ties to the dominant culture in a community.

Some banks are aware of the importance of having a shared culture with a community. Paravisini recalled an MBA student at Columbia University who planned to start a small network of banks in Harlem where all the loan officers would be from black and Hispanic communities. And in the UK, where he is based, lenders with a lot of immigrant borrowers employ loan officers of the same background.

“Their belief is that a recent immigrant from, say, Poland or Romania, will have an easier time communicating with an officer from their own country,” Paravisini said in an email to the AEA.

When banks don’t hire minority loan officers, it could hinder minorities who are trying to improve their credit standing. Almost by definition, a random minority borrower is less likely to be paired with a minority bank officer, Fisman said. That means that they aren't able to benefit from the cultural advantages enjoyed by dominant groups when borrowing money and developing a credit history.

The findings could support arguments in favor of promoting minorities at banks in order to expand lending opportunities to underserved communities, Fisman said.