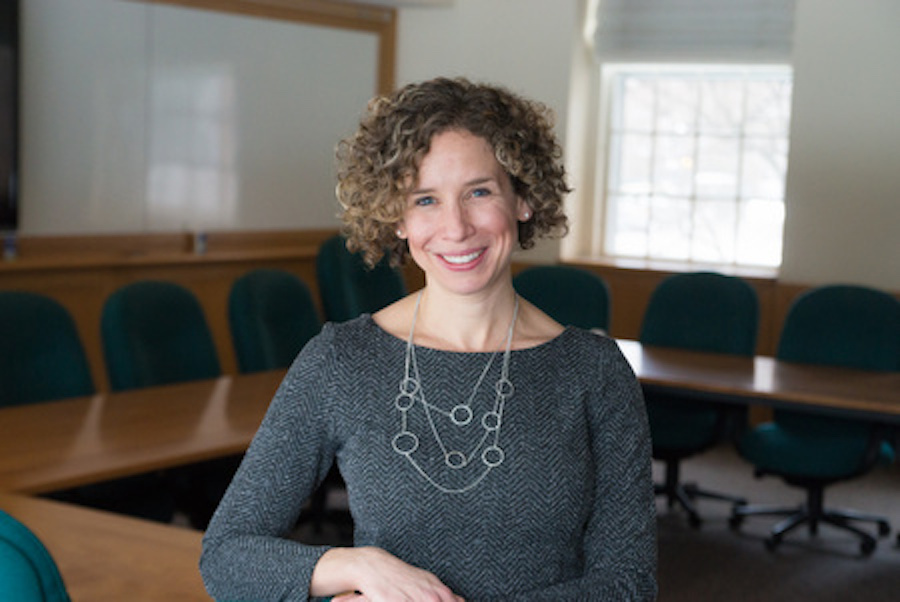 Elizabeth Cascio is an associate professor of economics at Dartmouth College.

This week marks the centennial of women’s enfranchisement in the United States and women have never been so politically powerful—or politically divided from men.

Her paper with co-author Na’ama Shenhav looking back on a century of the American woman voter appears in the Spring issue of the Journal of Economic Perspectives. Cascio recently spoke with the AEA’s Chris Fleisher about how women’s political influence has evolved differently from men’s and the factors driving that change.

The edited highlights of that interview are below and the full length interview can be heard using the podcast player below.

Chris Fleisher: This is an interesting time to be looking at the past century of women voting because it's a similar moment when women are galvanized politically at every level. What was happening 100 years ago? Who was really propelling this movement forward and what were the strategies that they were using to get then an all male Congress on board?

Elizabeth Cascio: We have to go back even further because this was the culmination of more than 70 years of struggle and trial and error on the part of movement activists. But I think you're kind of hitting the nail on the head in terms of how do we understand that struggle. It was one of trying to convince men in power that the benefits of expanding the franchise to women would exceed the costs.

In 1920, I think some moral arguments might have tipped the scale toward the amendment getting through Congress and ultimately being ratified by one vote in Tennessee. But moral arguments kind of didn't work very well early on. So the idea of equal rights/natural law really wasn't getting the movement very far.

Between the celebrated Seneca Falls convention in 1848 and 1920, the movement evolved to figure out how to make those benefits seem bigger to the men in power. Coalitions were formed with special interest groups like labor and farmers. The movement created really great local field organizations across the country. And those kind of organizations were ones that other social or political movements like the progressive movement could take advantage of. So in building these coalitions, they built the political case for themselves when it was finally approved.

Fleisher: What were the expectations about how women would affect politics? Did many men really believe women would have much political influence?

Cascio: It might seem kind of surprising, given this long road and all of these struggles, but there was actually a lot of speculation that women having the right to vote wouldn't matter that much. There's a quote we have in the paper from the pollster George Gallup in 1940. He said, “How will women vote on Election Day? Just exactly as they were told the night before.” So there was really an expectation that even if women did get out and vote. . . that they would essentially just duplicate their husbands vote.

There isn't any Gallup polling data from right around 1920 or other survey data for us to really know exactly what the sex gap in, say, voter participation was and how it changed right around 1920. But what my co-author Na’ama Shenhav and I do in the paper is get total election returns. How many votes were cast divided by the total voting age population, including both men and women? Then we look at how that evolved around 1920. We see that between 1916 and 1920, that voter turnout rate that we've created goes up by about 40 percent.

Fleisher: I saw an Atlantic piece about some of your research in which you had an interesting anecdote about the difference between how your grandmother and your mother voted. Could tell that in the context of how this evolution of women as political actors has evolved?

Cascio: You know, my mom voted just as much as my dad when I was growing up. But I remember being in the car with my grandmother after work. They would go to the polls for my grandfather to vote. She would sit in the car and my grandfather would go into the polling place. I did find this kind of puzzling.

It came back to me in thinking about the changes over this period, because what we found is that that increase in women's voter turnout relative to men over time was not really like all women starting to vote more over time, regardless of age or cohort. It was more about older, lower participation cohorts being replaced by younger, higher participation ones. It was really driven mainly by these kind of strong cohort effects.

Fleisher: Why do you think it evolved this way?

Cascio: We don't know for certain, but we think that some process of early life socialization around voting and politics is important here. In the paper we show that there is a pretty strong correlation between the spread of high schools and the sex gap in turnout. In parts of the country where high school education became common or almost universal, those are areas where the sex gap in turnout closed faster. Now, that doesn't mean that high schools themselves were socializing women into feeling comfortable with voting or feeling a response to civic responsibility to go to the polls. It could have been correlated with something else entirely. But it does suggest that there is something going on early in life.

Fleisher: By the 1980s, women voters had leapfrogged men in election turnout. Why at that moment?

Cascio: At least in the case of turnout, I think it's been less about some galvanizing moment and more about general generational change and how women have been socialized around political participation. . . . Women have continued to gain on men cohort by cohort since 1980. However, the changes have been much less pronounced than they were before 1980, when we had these cohorts still participating to some extent who hadn't necessarily had that early life exposure to (voting).

Fleisher: I’ve seen explanations of what happened with Reagan and the Republican Party's shift on some issues in explaining why women voters leapfrogged men in election turnout. What you're saying is maybe that's not so much the case?

Cascio: Yes. That's not consistent with our findings. I do think there is an interesting story to be told that's really more about time effects, say, than cohort effects, but that concerns partisanship.

Fleisher: Let's talk about that, because it's really interesting. What has happened with partisanship and the gap between men and women?

Cascio: This is what political scientists refer to as the gender gap, and it really does become noticeable around 1980. Women were just less likely than men to vote for Reagan and they started to identify relatively more with the Democratic Party starting around 1980. By 2016, our best estimate is that the gap in partisanship was about 12 percentage points. Women were about 12 percentage points more likely than men to identify as a Democrat. Thirty years before, the gender gap was probably around 3 percentage points.

We subject these changes to the same kind of analysis as we do with turnout and you just don't see a strong cohort effect. So what you see instead is that women of all ages experience or contribute to these changes. And I think that raises some interesting questions. Why the time effect? There are two broad classes of explanations. One is that women's preferences changed relative to men's in a way that made their politics align more with the Democratic Party. Alternatively, the second explanation is that Democrats’ agenda evolved so as to better reflect women's preferences.

Fleisher: What did you find?

Cascio: We found actually more evidence that the parties changed. We look at the late 70s, early 80s and today, and there's really been a lot of social change over that period. But, women and men respond similarly to matters of public opinion. That did change a lot over this period with a few exceptions. But we do see that the two major parties have become much more polarized.

Fleisher: How has women's rising participation and this widening partisanship gap affected policy?

Cascio: Economists have done empirical work that suggests that just the threat of women being able to vote raised government spending and changed how it was distributed. We started spending a lot more on public health or education, on issues that women tend to care about more than men. That evidence, though, is situated in that period of some states adopting suffrage earlier than others. So it was situated more than a century ago. Why is it attractive to think about that period? Well, it's just interesting from a historical perspective, but it's also that some states not doing it gave us a sense of what would have happened in the absence of suffrage.

Partisanship starts to matter a lot more when politicians have some freedom to act in their own self-interest. And in that case, it becomes much more important to try to elect into office people who share one's ideology, who share one's preferences, because otherwise there's little to get them to do what you like them to do. The fact that women have become stronger partisans over time in a way that's different than men seems to suggest that they might be becoming more politically influential.

But all of those inputs—participation, preferences, partisanship —they ultimately get combined with political institutions like gerrymandering and the Electoral College that basically make some people's votes count more than others. Our analysis is kind of treating every woman as sort of having kind of an equal likelihood of having an influence on policy. But a white woman in Pennsylvania might be much more pivotal than a Black woman in South Carolina. And those two women actually might have very different views on a number of topics. This idea of intersectionality, particularly between gender and race and geography, starts mattering a lot more for what actually happens in practice.

"A Century of the American Woman Voter: Sex Gaps in Political Participation, Preferences, and Partisanship since Women's Enfranchisement" appears in the Spring issue of the Journal of Economic Perspectives.