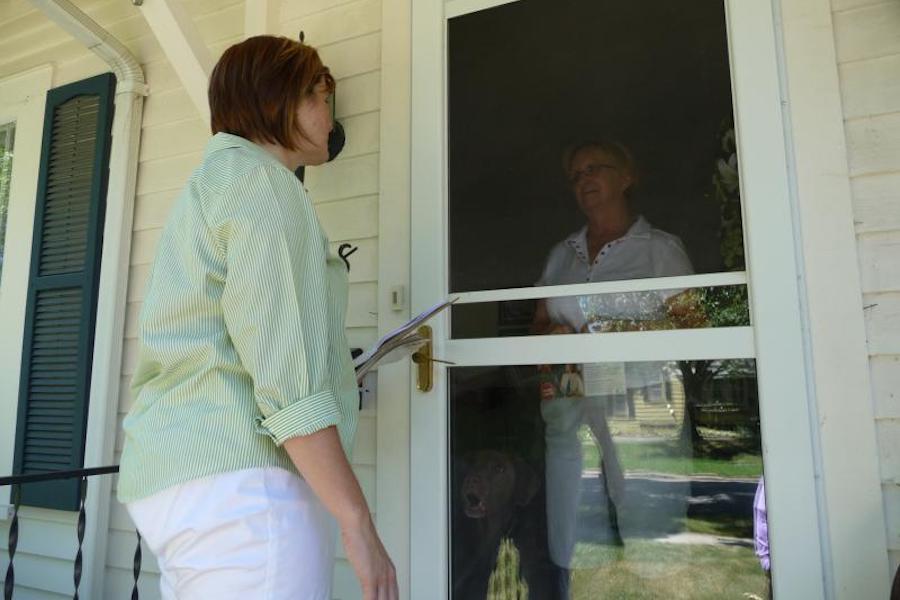 Jessica King meets with voters ahead of a special election in Wisconsin's 18th Senate District.

Candidates for public office are desperate to find new ways to reach voters at a time when much of the political conversation has moved online.

Pons studied the 2012 presidential election in his home country France and found that canvassing voters had an actual impact on the outcome.

Roughly 80,000 door-knocking supporters of Francois Hollande increased Holland’s vote share by 3 percentage points. While the impacts may be different in other countries like the United States, Pons says there are still lessons for how campaigns appeal to voters.

The AEA spoke with Pons about his research, which appears in the June issue of the American Economic Review, and also asked him about his own involvement in the 2012 French election and his experience trying to sway voters to his preferred candidate. An transcript edited for length and clarity follows, and the full-length conversation can be heard by clicking on the media player below.

AEA: Politicians have been knocking on doors canvassing voters for generations. What is it that we still don't know about the effectiveness of this strategy?

Vincent Pons: You're right that in the US people have been knocking on doors for a very long time. The question is does it work? Does door-to-door canvassing help campaigns and candidates win elections? There was a lot of research that had been done on field campaigns showing that it was successful increasing participation but we didn't know whether it also affected vote share.

AEA: When did you first get interested in this question?

Pons: I got interested in this during the last months of the 2008 US presidential campaign because I was coming from France. I started my PhD in the US and I was very impressed by what I could see of the Obama campaign by the systematic effort to recruit volunteers and ask them to knock on doors. This was very different from France. I started asking myself how this could be transposed to the French context.

AEA: Tell us a little bit about that French election, who the candidates were, what the climate was like. Was it very heated with clear divisions between the candidates?

Pons: In 2012, the campaign that is the focus of the paper is a door-to-door campaign that was implemented by Francois Hollande, who then became president. He was the candidate of the Socialist party on the left. His opponent was the incumbent, Nicolas Sarkozy, the candidate of the right. He had some very strong supporters in France, but also some people who really disliked him. There was a large polarization in France at the time. AEA: And so, it seems like you'd have a lot of voters firmly on one side of the fence or the other. I question how much you could possibly convince someone to another opinion. What were you expecting to find?

Pons: Going into the campaign, the hypothesis that we made — and I say "we" because I was involved in the whole thing both as a researcher but also I was one of the pilots of this field campaign — the hypothesis that we had was that the way to win votes was to mobilize the left-wing nonvoters to encourage them to vote for Hollande. And instead what I find in the paper is that the campaign increased the vote share of Hollande but without increasing turnout. It suggests that the effect was obtained by persuading active but undecided voters to vote for Hollande instead of voting for Sarkozy.

AEA: You also did a little bit of door knocking. What was that experience like?

Pons: It was extremely interesting to knock on doors. These were short conversations, three to five minutes in general, but even in just three to five minutes you were able to meet someone oftentimes from a very different neighborhood, a social or demographic background that perhaps is different from yours, and you were able in just these few minutes to bridge the gap with these voters and to also change your stereotypes that you had about their life.

AEA: How did these conversations actually go?

Pons: You knock on someone's door, they open the door and they are very surprised. That's the first thing. We are in France and this is a relatively new thing. In the US, when someone knocks on your door, typically people open and they react like, “Oh we know you, we've seen your friends like two weeks ago. It's OK, we're going to vote” and they try to get rid of you.

In France, in 2012, this was the first time that such a large-scale effort was undertaken, so people were surprised and perhaps a bit worried. Very rapidly you explain we're campaigning for the Socialist candidate, Francois Hollande, and I think in a few seconds you understand where people stand politically. You can also understand whether people are informed and they are happy to engage in conversation with you or whether they seem to be less interested and not very confident and they would try to avoid the topic of politics because they think they don't master it so well.

AEA: You found that this canvassing effort actually increased Francois Hollande's vote share by around 3 percent. Put this in context. Was that enough to actually determine the outcome of an election.

Pons: This is a substantial effect, because it means that a large fraction of people who opened their door were actually persuaded to vote for Hollande as a result of the interaction. It accounted overall for one-fourth of Hollande's victory margin.

AEA: Was there any sense that this effort had any lasting effects on voter opinions.

Pons: Yes, in fact I was able to track down the impact and to check whether the impact lasted and we find that the impact almost entirely persisted at the parliamentary elections that took place one month after the presidential vote and there was also persistence two years later in 2014. Two years after the intervention, in the European elections in which voters could also vote for left-wing candidates, we see that about 50 percent of the original effect persisted.

These deep conversations allow us to bridge the gap.

AEA: Was that surprising?

Pons: I didn't expect that. I'm sure you've tried to persuade people in your family that have different ideas. Every Christmas dinner you have these political discussions that are super interesting but, in the end, you keep your own preference and they keep theirs. I didn't think that a random stranger spending three or five minutes talking with you would persuade you. I think the reason, my interpretation at least, is that this thing was so novel, so surprising, that it sent a signal of quality about the Socialist candidate. The fact that they were able to organize this large-scale campaign sent a signal of quality and it sent also a signal that they were interested in what voters had to say.

AEA: What do you think the major lessons are here for modern campaigns?

Pons: I think a lesson is that this traditional old-fashioned way to talk to voters is effective at a time where there are new ways available but also in a time in which we see declining turnout and increased polarization. These very deep, direct, and personal conversations that they face in campaigns can also take place way before and way after campaigns. These deep conversations allow us to bridge the gap, either with people who stop voting to try to get them back to the polls or with people that have a different view. It's very hard to get to these people with impersonal techniques with the TV, with social networks, with the internet, and it's possible to do that with these direct live conversations that take place at their doorstep.

Will a Five-Minute Discussion Change Your Mind? A Countrywide Experiment on Voter Choice in France appears in the June 2018 issue of the American Economic Review.

Bias at the polls