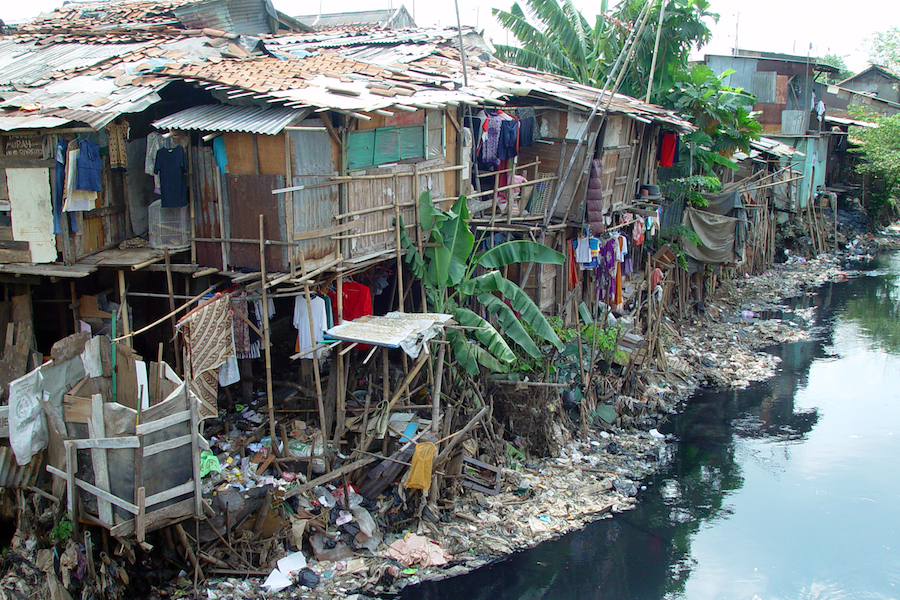 Slums built on swamp land near a garbage dump in Jakarta, Indonesia, in December 2003.

Four years ago, the rock star and activist Bono put forth an optimistic message about helping the poorest of the world’s poor.

Global poverty is in rapid decline, he told an audience at the TED2013 conference. He came armed with data about life-saving AIDS treatments and declining mortality rates. Then, several minutes into his talk, he pointed to a chart on a large screen behind him. A plummeting line represented the share of people living on $1.25 per day, which was then the World Bank’s official threshold for measuring extreme poverty.

“If the trajectory continues, look where the amount of people living on $1.25 a day gets to by 2030,” he said. “It can’t be true, can it?...Virtual elimination of extreme poverty.”

That’s the World Bank’s goal — to eradicate extreme poverty everywhere by 2030. But the outlook may not be as rosy as Bono imagines. NYU Abu Dhabi economist Robert C. Allen says that we haven’t made as much progress as we believe and that the World Bank is underestimating extreme poverty worldwide, especially in much of the developing world. He published a paper about it in the December issue of the American Economic Review in which he also offers a new — and controversial — way to measure poverty.

He said his goal was to establish a more objective and transparent standard.

“One of the objections to the World Bank poverty line is that nobody knows what it means,” Allen said in a telephone interview with the AEA. “People ask, ‘Can you really live on a dollar a day?’ and the Bank refuses to answer those questions.”

The World Bank estimates that 766 million people, or 10.7 percent of the world’s population, lived in extreme poverty in 2013, down from 1.84 billion individuals in 1990. When researchers first developed the World Bank measure in the late 1980s, they started with national poverty lines — the minimum cost to provide a person’s nutritional, clothing, and shelter needs — of the world’s poorest countries and converted them to a common currency using purchasing power parity exchange rates. They noticed that in six of the poorest countries, the value of the national poverty line was about $1 per day, per person. The line has been updated several times since and currently sits at $1.90 per day.

One of the objections to the World Bank poverty line is that nobody knows what it means. People ask, ‘Can you really live on a dollar a day?’ and the Bank refuses to answer those questions.

Allen claims the World Bank’s poverty line is based on opaque methodology and isn’t applicable outside the tropics. In his paper, he raises concerns about the narrow group of reference countries used in setting the “$1 per day” threshold. He also says regional price variation within large countries could throw off the World Bank’s measure, and questions assumptions made in the underlying national poverty lines themselves. For example, the nutritional and clothing needs to survive a Russian winter are very different from spring in sub-Saharan Africa — variation that he says isn’t accounted for by World Bank economists.

Instead, Allen proposes a new approach he calls the “basic needs poverty line.” It includes three categories of spending — food, nonfood goods, and rental housing — and builds on Nobel laureate George Stigler’s work in linear programming to design a diet that meets the minimal nutritional requirements.

Allen says that his new poverty measure does a better job than the World Bank’s at tracking basic nutrients in food diets and accounting for differences in housing costs and climate. The World Bank international standard relies too heavily on poverty in tropical climates, he said.

Allen doesn’t claim his new measure is perfect. In fact, he is reviving an approach that has been largely criticized by economists as being unrealistic. Even Stigler acknowledged the limitations of using linear programming — a mathematical technique used to solve optimization problems — to create a least-cost diet. It’s “the height of absurdity,” he once said, to expect that anyone would want to sit down to a dinner of “extreme economy,” one that offers only the minimum amount of nutrition needed to sustain life. It ignores human tastes and habits, and nobody in a wealthy country would stand for it.

Allen acknowledges that his least-cost diet isn’t realistic for people in rich countries. But poor people are different, he said.

“For them, survival is the issue, and the needs for survival take precedence,” Allen says in the paper.

Allen considers a number of diets in his paper. There is one based on a basic calorie count (1,700 per day), a calorie-protein-fat diet, a “basic model,” and a “full course” model. The last two are different in that they consider recommended daily allowances of minerals and vitamins. Ultimately, Allen decides the basic diet is the best measure.

Allen tailors poverty lines to each country. The average for developing countries is $2.63 per day and, for richer OECD countries, comes to $3.96 — much higher than the $1.90 standard used by the World Bank.

The result is to paint a picture of poverty that is much more pervasive than we thought, especially in Asian countries like Vietnam and Indonesia.

Two measures of poverty
The World Bank's poverty line of $1.90 is the standard threshold for the minimum amount of income a person needs to survive. Researcher Robert Allen has proposed an updated measure called the Basic Needs Poverty Line, which calculates a different diet and includes nonfood items and housing. The chart below compares the two measures for 17 countries. The shaded blue area is for developing nations, pink indicates middle-income OECD countries, and high-income countries are in green.
Source: author calculations

Allen’s proposal is controversial. He has already been taken to task by Georgetown economist Martin Ravallion, who helped develop the World Bank’s measure and called Allen’s proposal a “step backwards in measuring global poverty.” Stigler’s linear programming” approach for frugal diets was dismissed long ago, he says, and he rejects the premise that poor people would be any more willing to embrace a socially unacceptable diet.

“(A) frugal nutritionally adequate diet comprising foods that are rarely consumed may well be just as socially unacceptable in the poorest country as the richest,” Ravallion said in his comment on the paper, adding that he found “Allen’s evident perception of poor people in the world troubling.”

Allen said he expected some push back but disputed the notion that linear programming produced unrealistic diets for poor people. It is not unreasonable to expect that people in extreme poverty would change dietary habits if it were necessary to survive, Allen said.

He added that Ravallion’s claim about linear programming diets being socially unacceptable should imply that they cost less than the World Bank’s lines. On the contrary, they almost always cost more.

“I think this points to underlying problems with the Bank's methodology that are camouflaged by the lack of transparency in the Bank’s procedures,” Allen said.

It’s unclear whether Allen’s paper will gain any traction at the World Bank. However, he hopes at the very least that it forces them to reconsider how they think of extreme poverty.

“I don’t know what they’re going to do about the linear programming part of the paper, but I think they have to consider the effect of climate and also the real estate market in rich countries,” he said. “What they’re doing now is so completely inappropriate for that, I think they’re going to have to do something along these lines.”

"Absolute Poverty: When Necessity Displaces Desire" appears in the December issue of the American Economic Review.