Will cities ever break the habit of paying for stadiums? 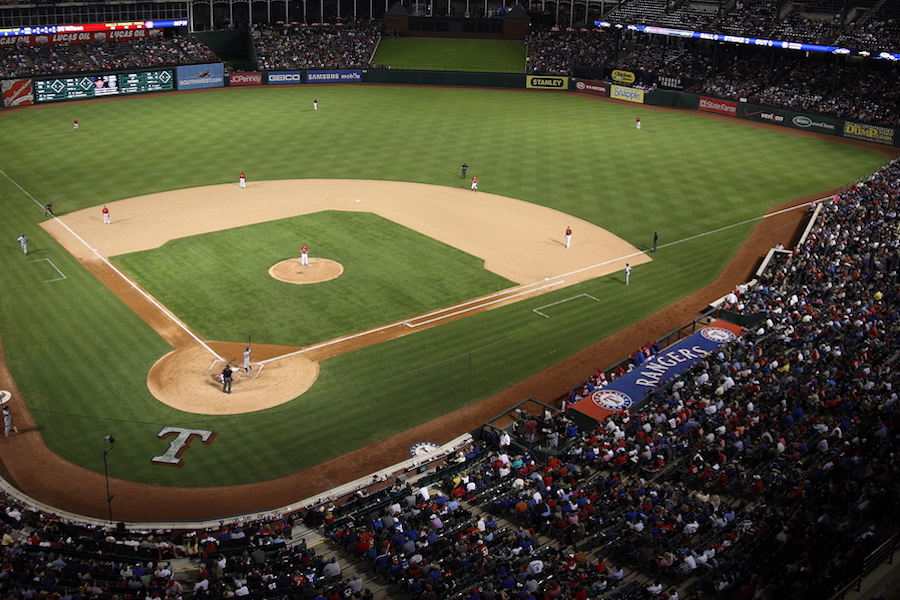 The Texas Rangers take on the Seattle Mariners at Globe Life Park in Arlington, Texas, September 27, 2010.

Last week, the NFL’s Oakland Raiders secured approval to relocate to Las Vegas – and they will have a shiny new $1.9 billion stadium waiting for them. It’s a sum that might have seemed outlandish ten or twenty years ago, but the proposed stadium joins a new generation of stadium megaprojects flirting with the $2 billion mark.

So who’s paying the bill? The team is covering a share of the costs, but the state of Nevada pledged $750 million in public funds in a widely-panned deal that was nonetheless seen as crucial to sealing the deal. It’s the latest in a string of successful stadium deal negotiations for NFL teams, which have collectively secured upwards of $6 billion in public funding for two dozen stadium construction and renovation projects coast to coast since the turn of the century.

These deals are always accompanied with sunny projections of booming economic development, an infusion of new tax revenue, and sometimes a pledge to put a city “on the map” in a big-league way. But do these projections ever pan out?

The almost unanimous verdict of sports economists: no. A paper that appeared over a decade ago in the Journal of Economic Perspectives by John Siegfried and Andrew Zimbalist lays out the case against public funding for big-league sports entertainment.

Major sport leagues in North America have effective monopoly power, and team owners can control how and where a league expands. As the authors explain, the leagues usually do a good job of leaving a few major cities without teams – enough to provide a threat point for teams angling for a new stadium deal, but not enough to sustain a whole new competitor league that could challenge the monopoly.

A century of ballparks
Data on construction costs and public financing for over 150 major North American stadiums and arenas, from Shibe Park and Forbes Field (1909) to Levi's Stadium (2014). Circles are shaded more darkly for stadiums that received more public funding. Dollar figures are adjusted for inflation to their modern-day equivalents. 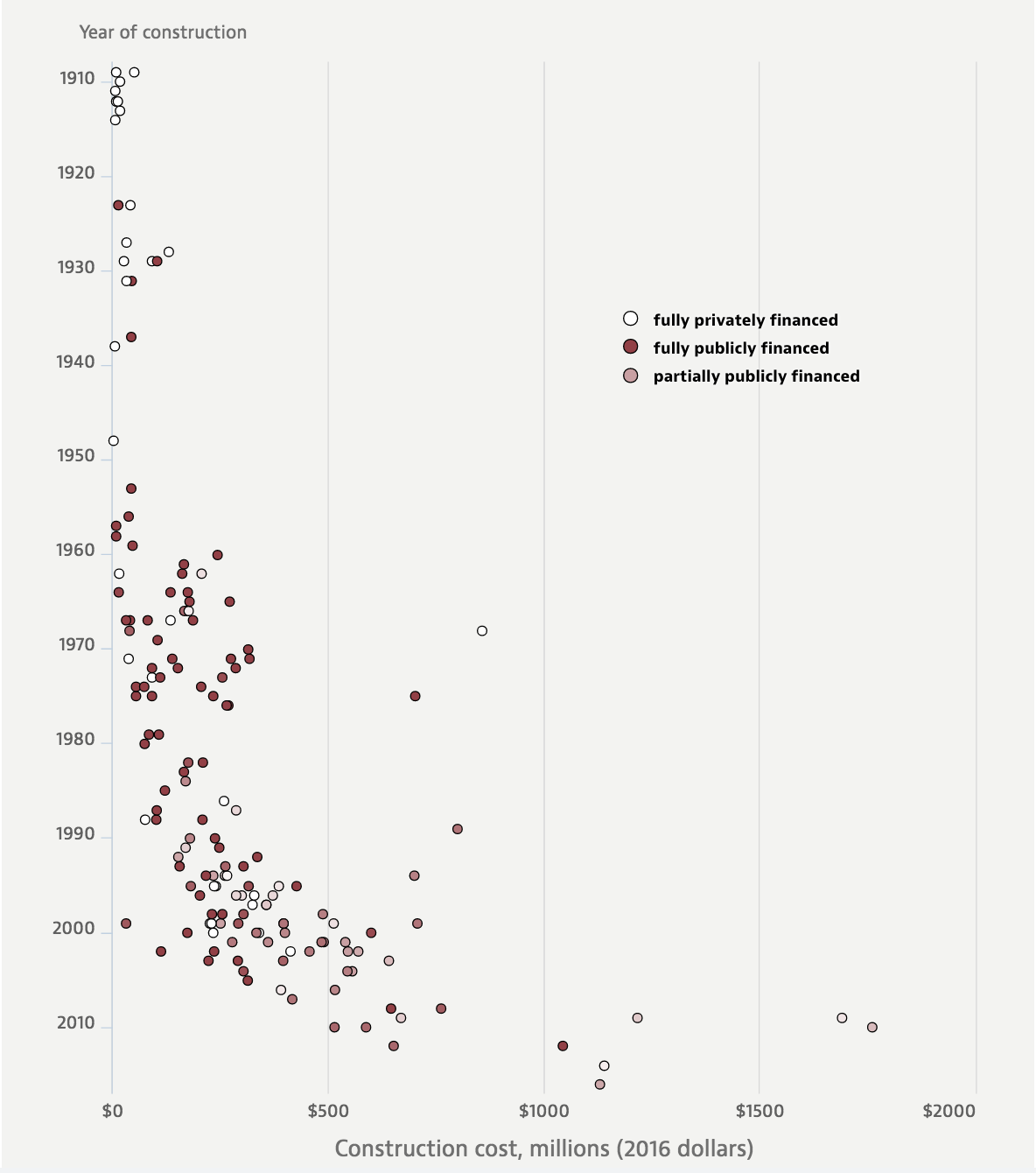 In a competitive market, cities of various sizes could attract teams that would make proportionate investments in more modest stadiums that could pay for themselves. But with cities competing for a limited number of franchises, team owners can drive a hard bargain.

Now in principle, paying to lure a team to your city could make sense. If there are enough benefits, like a boost to economic development or the warm glow associated with being a “big league” city, it could be worth it for a local government to pay to entice a team. But when economists have examined those purported benefits more closely, very few of them hold up.

The most basic promise is economic growth and development. With a sparkling new stadium or arena, more people will visit the city and spend money. Existing businesses will flourish, and new businesses will be attracted to the area.

But cross-sectional studies comparing cities with teams to similar cities without teams find no evidence of extra economic growth or income associated with a team. Other studies that tracked cities over time as they gained new teams also came up empty: if anything, a new franchise can act as a slight drag on economic growth.

This non-effect is probably attributable to a substitution effect: people mostly shift their entertainment dollars when a new team comes to town. All that money flowing to box seats and season tickets means leaner times for local bowling alleys and opera houses. And more realistic studies find that usually only a small share of stadium visitors come from outside the immediate area.

On top of that, team revenues that ultimately flow to owners and players are less likely to cycle back through the local economy, as many of them will pay high federal taxes and probably maintain a permanent residence out of state.

But what about the intangible effects? The Southern Nevada Tourism Infrastructure Committee projects that the Raiders’ new stadium in Las Vegas will earn the equivalent of $95 million per year in free advertising for the city and its tourism industry, not to mention the benefits that accrue to sports fans in the area who might never spend a dollar directly on the team.

These benefits are harder to measure, but Siegfried and Zimbalist note “there is no systematic evidence that business relocations follow sports teams.” They argue that there are many other factors that would play a much bigger role in such decisions, like the available labor pool and tax climate.

Even though economists have been sounding the alarm on stadium deals for decades, nine-figure funding deals are still fairly common. That’s in part because local politics can be heavily influenced by a relatively small population of sports fanatics that cares deeply about attracting or keeping a team. The authors also blame shoddy “economic impact statements” provided by consulting firms and booster organizations that don’t measure up methodologically but still persuade some members of the public.

These results stand in distinct contrast to the promotional studies that are typically done by consulting firms under the hire of teams or local chambers of commerce supporting facility development.

But times could be changing. In an interview this week with the AEA, Zimbalist notes that stadium development deals in the last two decades have started to include additional private investment in the area surrounding a new site. Some point to the development of the Staples Center and surrounding entertainment complex in downtown Los Angeles as an early successful example.

This is a marked contrast to the stadium-building mentality of the ‘90s. Older stadiums were “designed like European walled cities,” according to the authors, in direct competition with local retailers and restaurants. Investments in a more cohesive entertainment district might be more likely to create true economic growth and revitalize aging neighborhoods, and also could provide a more attractive cost-benefit proposition for cities.

Amid increased fiscal austerity and rising income inequality, cities might be losing their appetite for overly generous financing packages that will benefit only a small slice of the population, according to Zimbalist. On Tuesday, St. Louis voters narrowly rejected a tax increase to pay for a soccer stadium, amid concerns that certain communities stood to gain very little from a new MLS team relative to other types of investments. In the end, it may be up to voters to recognize a bad deal when they see one.

The Economics of Sports Facilities and Their Communities appeared in the Summer 2000 issue of the Journal of Economic Perspectives.

Do laws that restrict retailers from pricing items below cost actually harm consumers?