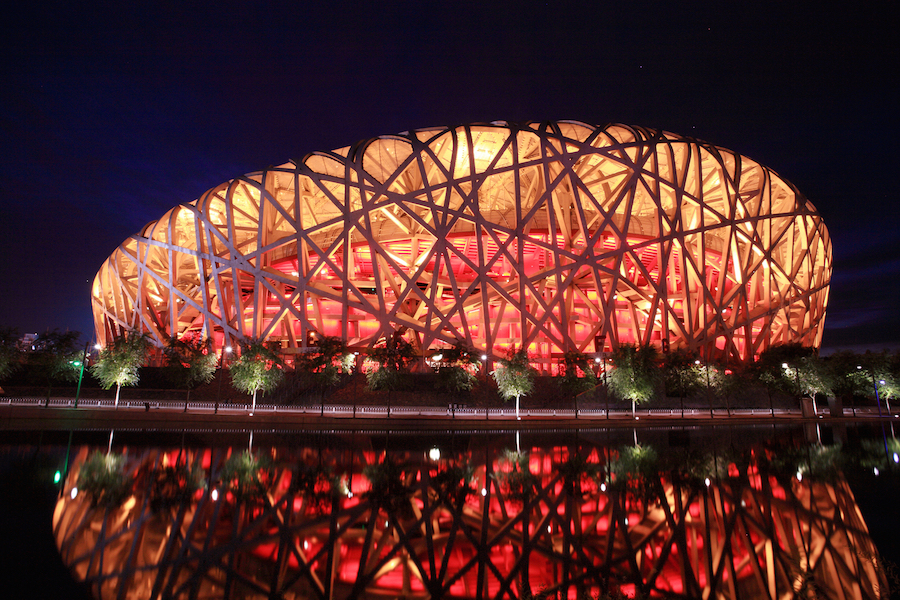 The iconic National Stadium in Beijing was the architectural centerpiece of the 2008 Olympic Games. Today is has partially been converted into apartments, although it will eventually be used again for the 2022 Winter Games.

With everyone confidently predicting disaster for this month’s Olympic Games in Rio de Janeiro and a dwindling list of candidates for hosting in 2024, people are beginning to wonder: does anyone want to host the Olympics anymore? A study appearing in the Spring issue of the Journal of Economic Perspectives breaks down the costs and benefits of hosting the Olympic Games and explains why some of the perceived economic blessings of the Olympics are mostly wishful thinking.

In Going for the Gold: The Economics of the Olympics (PDF), authors Robert Baade and Victor Matheson consult estimates from academic, public, and media sources on the costs and benefits of hosting the Games. As with any mega-event, costs and benefits can be hard to estimate, but the general story is clear: for most modern Olympics, the costs have far outstripped the benefits.

The direct costs of hosting the Games are probably easier to estimate and tabulate. First there is the non-trivial cost of mounting a bid, which can run into the hundreds of millions of dollars for planning, marketing, and architectural renderings. During this stage, candidate cities sign on to build future amenities in an attempt to impress the International Olympic Committee (IOC) and win the Games.

This might mean committing to a signature architectural marvel to host the Opening Ceremonies or a major upgrade to public transit to accommodate the once-in-a-lifetime demand surge that will result. A minimum of 40,000 hotel rooms and additional housing for 15,000 athletes and officials is required for the Summer Olympics, so often the bids must include plans for new hotel capacity and dormitories.

Hosting the Olympics isn't cheap
Estimated costs of hosting recent Olympic Games, including construction costs for athletic facilities, transportation infrastructure, and housing, and operational costs like events management and security. Estimates are derived from a variety of academic and media sources. The authors note that the two outlier Games were both held in countries with less accountable governments. 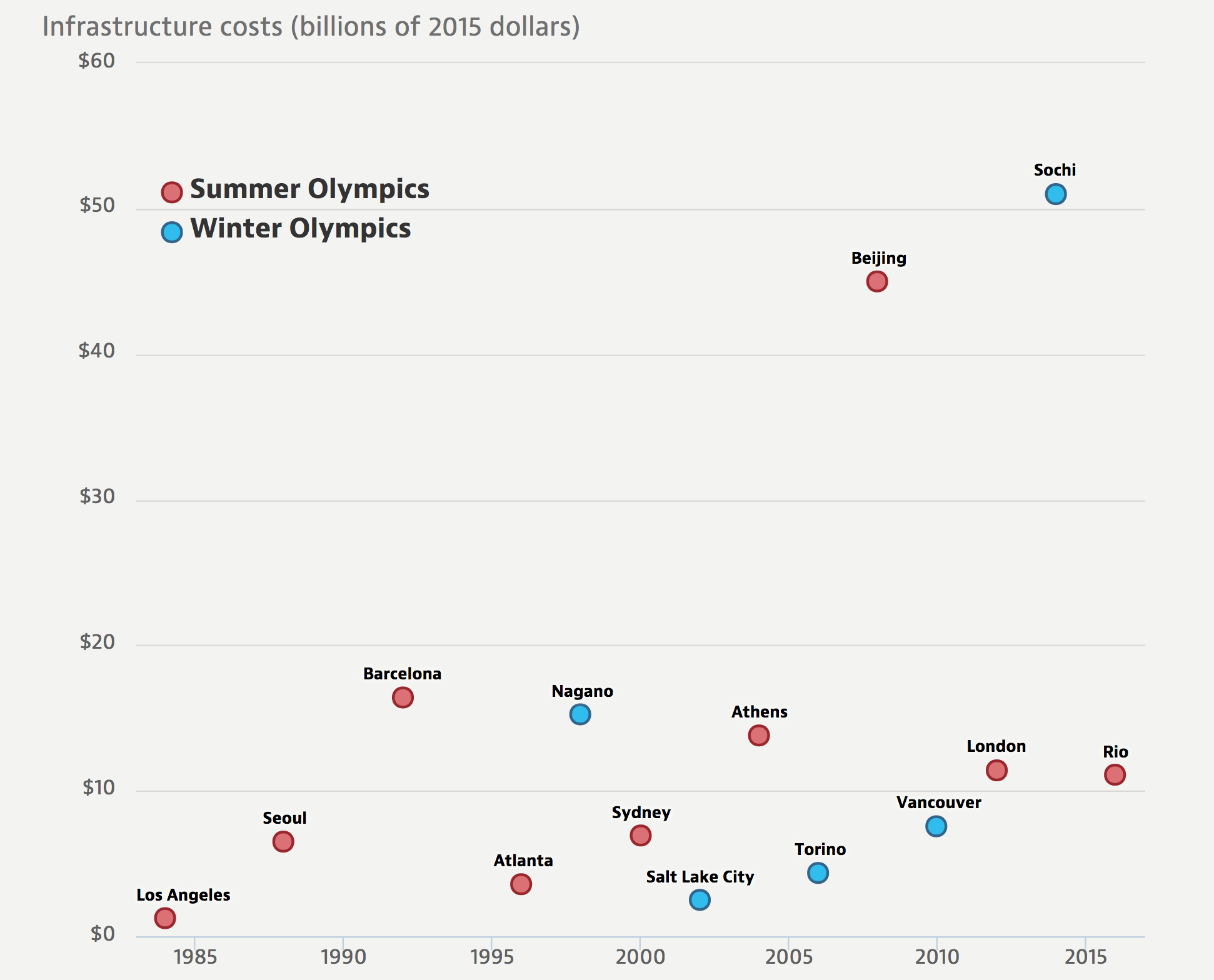 The IOC will tend to favor the city that makes the most lavish offer of gleaming new facilities and infrastructure improvements, so the bidding process can give way to a “winner’s curse” effect. The city that wins tends to be the one that overestimated the value of hosting the Olympics the most, and hence the one that went furthest overboard in their bid.

Once the Olympics have been assigned, the host city must typically spend billions of dollars building transit and airport improvements, reaching the requisite hotel capacity, and constructing specialized athletic facilities like a swimming facility, a velodrome, or a larger stadium that can accommodate an Olympic track. Disentangling these costs from planned infrastructure improvements that would have happened even in the absence of the Olympics can be difficult, but the best estimates put the cost of hosting at between $5 and $15 billion for most recent events (see figure above).

Mounting evidence showing that hosting the Games is a costly proposition for host cities seems to have turned voters across the world against the idea. A popular outcry derailed the Boston 2024 bid, and city officials scuttled Hamburg’s 2024 bid after losing a referendum there.

Increasingly, it seems like cities in liberal democracies are not willing to bid for the games: the competition for the 2022 Winter Olympics was reduced to two cities in autocratic regimes after four European cities dropped out. Not coincidentally, the authors note, the two recent Olympics hosted in countries with less accountable governments were major outliers in terms of cost.

The costs are clear, but the benefits of hosting the Olympics can be substantial as well, even if they are usually overstated by overzealous city officials or self-interested boosters. Host cities receive revenue from ticketing and sponsorships, and local organizing committees receive a share of the proceeds from the sale of television broadcast rights. These benefits are easy to quantify, but don’t add up to a significant fraction of the hosting costs in most cases. Vancouver 2010 produced about $1.5 billion in direct revenues and London 2012 about $3.3 billion; in each case, far less than the costs.

The rest of the benefits are more nebulous. Proponents tout supposed benefits ranging from the economic stimulus provided by construction demand, to increased tourism during and after the games thanks to a worldwide advertising campaign, to increased foreign investment and better trade connections, to an improved sports infrastructure for future generations (this last benefit is most easily debunked). The authors argue that most of these benefits tend to be less than hoped, or only appear in specific situations.

Infrastructure improvements can provide a form of fiscal stimulus to a city with a slack labor market, but if the city’s economy is near full employment anyway in the years leading up to the Games, the extra construction jobs are more likely to come at the expense of other sectors.

Tourism, meanwhile, can be crowded out by the hustle and bustle of the Olympics themselves – Beijing and London both saw fewer international visitors during the months they were hosting the Olympics in 2008 and 2012 compared to the same months in previous years, and Utah ski resorts noticed a dip in traffic during the 2001-02 ski season that coincided with the Salt Lake City games.

A few cities have had success generating future tourism business with the Olympics, notably Barcelona in 1992 which used the games to emerge from the shadow of nearby Madrid, another major tourist destination. Likewise, the Utah ski economy saw a boost in the years after 2002. But many other host cities like Calgary (1984) and Lillehammer (1994) have seen limited increases in tourism after their games.

The fact that Los Angeles profited from the Olympics in 1984 and Barcelona experienced an economic revival of sorts as a consequence of hosting the Games in 1992 has added currency to claims that the Games can be economically transformative. But hosting the Games has become an increasingly expensive gambit; indeed, as the rules for bidding currently stand, the entire structure of the Olympic Games shouts “potential host beware.”

One study did find that countries hosting the Olympics see a 20% increase in export trade in the years after hosting, relative to similarly-situated countries, which might go a long way to justifying the economic expense of hosting the event. But the same study found similar gains for countries where cities unsuccessfully bid for the Olympics. The authors suggest that the very act of bidding for the Olympic Games suggests a government is looking to increase international connections and willing to make infrastructure investments, which can attract foreign interest.

It is also likely that the types of cities that decide to mount bids are on an economic upswing and poised for growth, and actually winning that bid might be more likely to stunt that growth rather than accelerate it.

The balance of evidence is that the economic costs of hosting the Olympics far outpace the benefits, so why do cities bother to bid at all? One possibility is civic pride or the desire to affirm a city’s status as a “world city.”

These benefits are hard to translate into economic terms, but two careful studies used contingent valuation survey methods (similar to the techniques economists use to see how much people value maintaining the rainforests or keeping a species from extinction) to measure this benefit in the runup to the 2012 Olympics in London. They found that people across the United Kingdom collectively valued the opportunity to host the Olympics at about £2 billion, still well short of the cost of hosting.

This problem may end up solving itself if enough cities wise up and stop incorporating such grandiose plans into their bids. After a streak of cost overruns for Olympics during the 1970s, interest in hosting the Olympics waned and Los Angeles was the only bidder for the 1984 Games. The city used its leverage to insist on using existing facilities rather than building new ones and adopted a cost-conscious approach that maximized sponsorship and TV revenues. The result was one of the few profitable games in history – and a model that future host cities might want to emulate.

“Going for the Gold: The Economics of the Olympics” appears in the Spring 2016 issue of the Journal of Economic Perspectives.

How decision-making and cognitive function are affected by payday