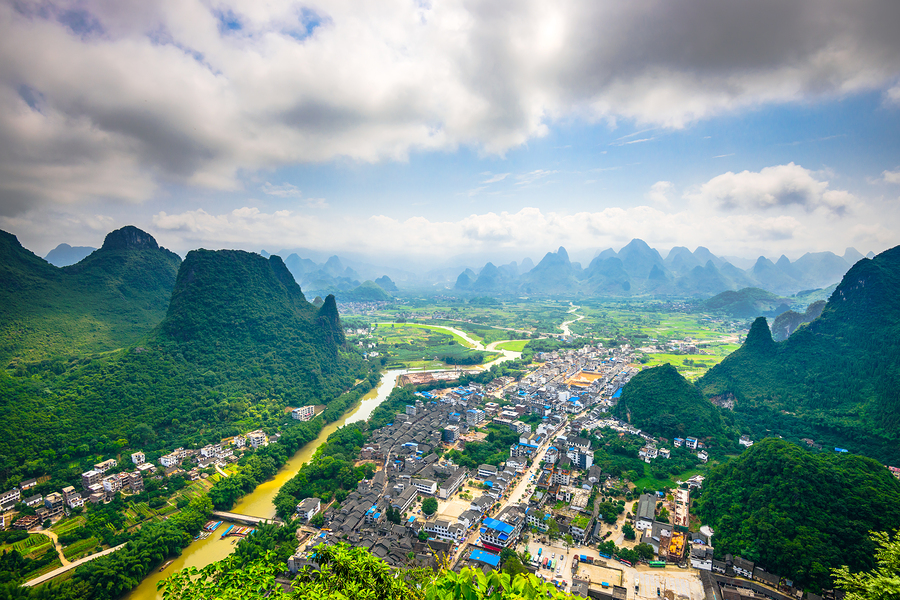 The Lijiang River in the Guangxi region of southern China. A major tourist draw, the river is the subject of an intensive anti-pollution campaign.

River pollution flowing downstream is a classic example of a negative externality, and it can be especially problematic in cases where a river flows through multiple political jurisdictions. When polluted water flows across borders into the neighboring provinces and countries, it quickly becomes somebody else's problem. Water pollution that affects local residents can be politically disastrous, but governments and businesses often don't have nearly as much incentive to keep the water clean at the points where rivers flow out of their jurisdictions.

This "downstream effect" has been documented across the globe in studies of water quality ranging from the European Union to southern Brazil to the U.S.-Canada border. A paper appearing in the November issue of the American Economic Journal: Economic Policystudies a case of the downstream effect at work in China's major rivers and analyzes a government policy that changed incentives for local leaders.

In Water Pollution Progress at Borders: The Role of Changes in China's Political Promotion Incentives (PDF), authors Matthew Kahn, Pei Li, and Daxuan Zhao study the effects of a 2006 initiative by the Chinese central government to establish new incentives for local government officials to keep rivers clean. The new criteria concerned a specific measure of water quality called chemical oxygen demand (COD). COD levels in a river are a good proxy for the amount of organic matter pollution in the water.

The new directive gave provincial leaders credit (and better opportunities for promotion) if they could reduce COD levels at water monitoring stations within their province, including ones located at provincial borders. If COD levels spiked in the next province downstream, leaders in that province could complain as well.

Local politicians’ career trajectories are thought to be mostly linked to their track record for fostering economic growth, so keeping rivers healthy is probably a secondary concern for most. There is still some incentive to keep water clean for local residents to avoidembarrassing environmental scandals and citizen outrage, but maintaining clean rivers for the province next door is not usually a high priority. Suddenly, with the new rules, local leaders had a new incentive to care about the quality of their river water when it was about to flow out of their jurisdictions.

China’s long rivers plagued by the “downstream effect”
A map showing the location of 499 water pollution monitoring stations in China, with stations at provincial borders highlighted in red. Before a 2006 reform, provincial governors had little incentive to keep rivers clean at the points where they flowed into neighboring provinces. Predictably, pollution tended to be worse there.
Source: geographic data from Kahn et al. (2015)

After the central government announced new targets for CODs (and new penalties for noncompliance) as part of the eleventh Five-Year Plan in 2006, COD levels began to fall nationwide. Looking at data through 2010 (the latest publically available), the authors find that, after the new policy was announced, COD levels at border stations fell by about 2 mg/L more than levels at stations not along provincial borders. The differential finding holds up when the authors include controls for nearby economic activity, urban settlements, and water temperature.

The new incentive probably wasn’t equally powerful in every province, though. The authors hypothesize that some local officials would be more likely to respond to incentives from the central government than others – namely, ones who were looking to move up the ranks within the Communist Party of China. Their analysis indicates that the new pollution criteria had much greater effect in provinces where the governors were young (and thus had a longer planning horizon for their careers).

In general, local authorities seemed to respond strongly to the new incentives from the central government, but how did they actually accomplish the reduction in COD levels? The authors note that while local governments in China have relatively less control over household and agricultural practices, they have a monopoly on zoning land for industrial activity. The pulp and paper industry is the top industrial emitter of COD discharges according to Chinese government sources, so the authors wondered if local governments had cracked down on this sector in particular to reduce COD levels at provincial borders.

Water pollutants such as petroleum, mercury, and phenol are more harmful than COD for public health. Unlike the case of COD, these water pollution measures do not significantly improve at boundary stations. This is relevant because these criteria were not chosen to be part of the objective performance criteria for evaluating the effectiveness of local officials.

Examining geographic data on new paper plants that opened in the years before and after the reform, the authors measure the distance from each new plant to the closest border monitoring station. They find that plant openings tended to shift farther away from those sensitive border monitoring stations after 2006, but found no similar effect for non-border stations.

These findings are a good reminder that even in countries with limited free markets and an emphasis on centralized planning, economic incentives never really disappear. And the "downstream effect" is by no means limited to centrally-planned economies. A 2005 study found a very similar phenomenon in the United States when certain states took over responsibility for enforcing the Clean Water Act within their borders; rivers downstream from those states saw degraded water quality. Clearly, government officials are responsive to incentives the world over.

Even so, figuring out the right way to design those incentives isn’t always easy. The authors note that the effect they find was quite narrow: mercury and phenol levels did not improve along with COD levels after 2005, probably because they were not included in the criteria for evaluation by the central government. The subsequent Five Year Plan implemented in 2011added new targets for these chemicals, but it remains to be seen if the downstream effect has been completely stamped out. ♦

"Water Pollution Progress at Borders: The Role of Changes in China's Political Promotion Incentives" appears in the November 2015 issue of the American Economic Journal: Economic Policy.