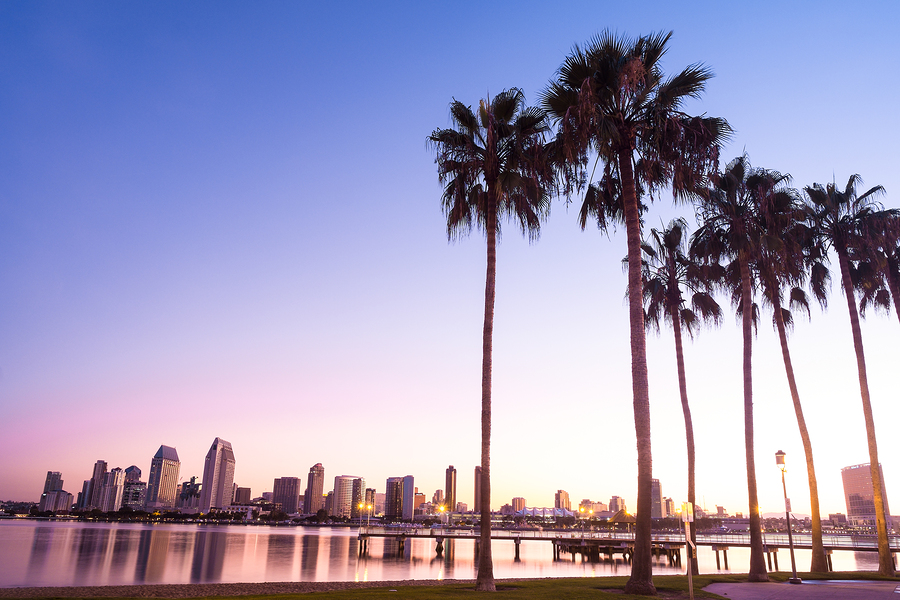 A view of the San Diego skyline from Coronado, California. The authors find a connection between climate amenities and high relative pay for local and state government workers.

Earlier this month, the Supreme Court heard oral arguments in Friedrichs v. California Teachers Association, a contentious case that could spell the end for "fair share" fees that help public sector unions finance their operations. By all accounts, advocates for public sector unions got a frosty reception from the justices, and many are speculating that U.S. public sector unions will lose an important source of funding once a decision is handed down.

Public sector unions have faced increasing scrutiny in recent years, and reducing collective bargaining rights for public sector workers has become a cause célèbre on the political right. Public sector workers are highly unionized and politically powerful, so it seems plausible that they could influence state governments to pay them more than the minimum they would be willing to take (or as economists would say, they may be extracting rents from taxpayers).

Some economists have argued that this may not be a big concern in practice; if a state becomes "captured" by public sector workers who start raising taxes to pay their salaries, residents can decide to leave – a phenomenon known as Tiebout sorting.

But if there is something attractive in that state which keeps residents from moving, they may end up accepting the higher taxes. A recent article appearing in the American Economic Journal: Economic Policy proposes that public sectors workers and unions are better positioned to extract rents in states that people don't want to leave.

In Beaches, Sunshine, and Public Sector Pay: Theory and Evidence on Amenities and Rent Extraction by Government Workers (PDF), authors Jan Brueckner and David Neumark lay out a theory that state and local government employees – including public school teachers, sanitation workers, county clerks, and prison guards – are able to negotiate for higher pay in states with attractive amenities like a mild climate or access to dense urban centers.

The authors build a wage model based on data from hundreds of thousands of workers in theCurrent Population Survey, trying to predict each individual's wages based on demographic factors like age, marital status, level of education, and whether they are employed in the public or private sector.

Suppose people really want to live near the beaches of California, the sunny desert climes of the southwest, or the shores of Lake Michigan, even if they have to pay a little more to live there. According to the logic of the model, public sector workers will crank up taxes to pay for their higher wages – effectively charging a toll to live near these great amenities – and taxpayers will grumble about it but most will ultimately not leave the state.

Residents will move if the tax bill gets too extreme, so public sector workers can't pay themselves an unlimited salary; instead, they can only afford to raise taxes as long as the local amenities remain sufficiently attractive.

The authors compile data on four amenities for the 48 states of the continental U.S.: mild temperatures (as measured by seasonal temperature variation), dry climate (as measured by rainfall), proximity to oceans, lakes, or major rivers, and population density of the state. All four factors are positively associated with home prices and seem like reasonable proxies for the things that attract people to a particular area.

After constructing a statistical model to test their prediction, the authors find that their four amenities are indeed good predictors of both high public sector wages and high relative wages for those workers. This remains true when they control for housing costs and the political leanings of each state to address potential alternative explanations.

That states with larger union presence or stronger collective bargaining rights would have higher public sector pay is not surprising, but the stronger effects in high-amenity states is suggestive evidence that the authors are right when they see a connection between nice amenities and the political process that determines pay for public sector workers.

Better understanding of this phenomenon could lead to reforms to lower rent extraction by public sector workers, which would reduce public sector wages but would redistribute the savings to the taxpaying public (especially to people who use more local government services if it means states could afford to hire more workers). The authors close with a call for more research to flesh out their model and develop policies to reduce the rents going to public sector workers. ♦

"Beaches, Sunshine, and Public Sector Pay: Theory and Evidence on Amenities and Rent Extraction by Government Workers" appears in the May 2014 issue of the American Economic Journal: Economic Policy.