Measuring the labor market value of these increasingly common credentials 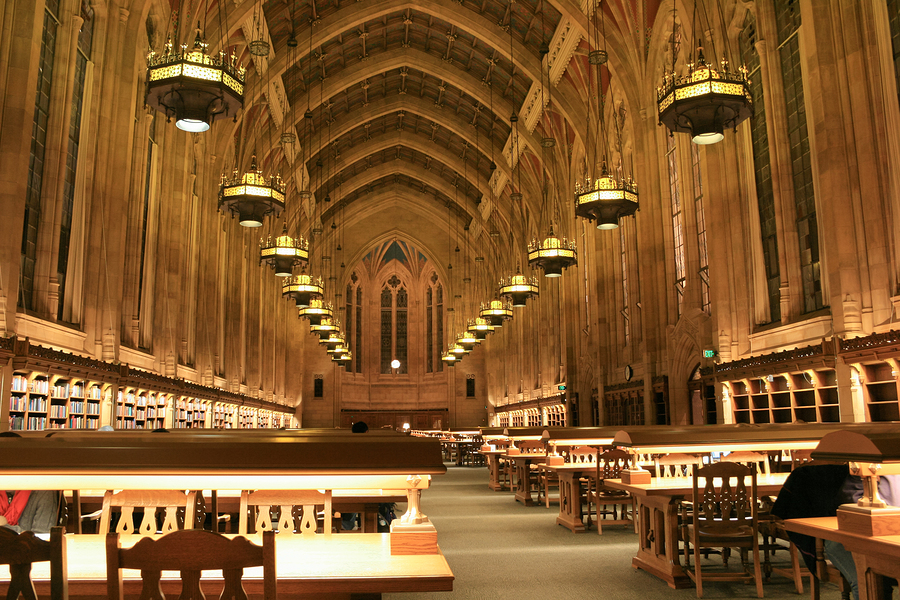 Students study at Suzzallo Library at the University of Washington, November 28, 2007. Some for-profit colleges eschew the physical campus entirely in favor of online instruction.

For-profit colleges saw a major growth spurt during the past decade, attracting millions of new enrollees (and billions of dollars in federal education funding) as they expanded online course offerings and worked to attract a range of low-income and non-traditional students that were poorly served by traditional nonprofit colleges.

But over the past year, the for-profit college education sector has come under fire. The U.S. Department of Education has vowed to crack down on for-profit colleges that are accepting federal education funding but offering students little in return. One major company went bankrupt after paying millions to settle claims of fraudulently advertising inflated graduation and placement rates -- and several prominent for-profit university companies are under investigation for similar deceptive practices.

Critics charge that some for-profit colleges are scooping up federal funds designed to help poor kids pay for college, only to offer mediocre instruction and dismal graduation rates. But there is an argument that for-profit colleges are more responsive and innovative than stodgy universities that have been around for decades or centuries, and are nimble enough to accommodate nontraditional students and design career-oriented programs like criminal justice and health technology.

Are students being duped into spending money on worthless degrees or are these institutions innovating and serving an important need-filling role? Evaluating the worth of a degree can be very difficult, but one way to judge the value of a degree would be to ask recruiters who routinely hire college graduates for entry-level positions how they feel when they see a for-profit or online college on a student’s resume. An article appearing in this month’s issue of the American Economic Review uses an audit study to approach the question.

In The Value of Postsecondary Credentials in the Labor Market: An Experimental Study (PDF), authors David Deming, Amira Abulafi, Claudia Goldin, and Lawrence Katz argue that an audit study can be used to measure the relative value of different types of credentials, ranging from an associate’s degree at a local for-profit college to an online bachelor’s to a degree from a selective public college.

For-profit and online colleges attract and enroll very different study bodies; while the typical new enrollee at a public or private nonprofit college is an 18-year-old student who just graduated from high school, the for-profit student body is much more diverse. Students might be older, returning to school after years in the workforce, or may have GEDs rather than high school diplomas.

Because the student bodies have such different backgrounds, comparing the employment rates or starting salaries of groups from different schools may not give a fair indication of the relative value of each type of degree.

The rise of the for-profit college during the ‘00s
Total student enrollment at U.S. two-year and four-year postsecondary programs by sector, 2002–2014. The for-profit sector saw huge growth during the period as online degree programs came into their own.
Source: U.S. Department of Education Integrated Postsecondary Education Data System

To get around this problem, the authors use an audit study, which in this case involves submitting a range of fictitious resumes to companies offering entry-level job openings. The virtue of the audit study is that these resumes can be designed to be exactly identical except for the educational history. By sending out fictitious resumes with different credentials and tracking the response from hiring firms, they can determine how employers feel about these various types of institutions.

The audit approach has been featured in a number of recent studies. It has been used to demonstrate employer discrimination against fictitious job applicants with identifiably black first names like Lakisha and Jamal and with longer periods of unemployment history who were otherwise identical to other fake applicants created by the researchers. Audit studies are not limited to job applications either; similar studies have shown that doctors are more aggressive in treating chest pain in white patients and that hosts on the peer-to-peer lodging site AirBnB are less receptive to requests from guests with identifiably black names.

The authors in this study adapted this approach by creating sets of identical resumes and then altering features of each resume including the educational history. To make sure the resumes were realistic, they created templates based on actual resumes posted on a major online job board. Then they carefully added a fictional work experience here or an externship there to match their fake applicants as closely as possible to the real applicants applying to these types of jobs.

Then they submitted those resumes online, providing phone numbers and email addresses that the researchers monitored for responses from employers. They focused on jobs in business and health that required little or no work experience so they could focus on job openings where the educational background would be of primary importance to recruiters. They used differences in the callback rates as the indicator of how interested recruiters were in each imaginary applicant.

The authors find substantial callback effects for business job openings that require a bachelor’s degree. When the researchers sent off “applicants” with BA’s from public colleges, the callback rate was about 8.5% on average. But applicants to the same job openings who had degrees from online for-profit colleges got called back 25% less often. These callback rates are adjusted for differential callback rates across different cities, job types, and firms, so they are a reflection of recruiters’ attitudes about each fake applicant’s degree type only.

The callback penalty was less, only about 10%, for resumes with degrees from local, brick-and-mortar for-profit colleges. This may reflect greater recruiter trust in for-profit schools with an established presence in the community that may have produced good employees in the past. However, the authors emphasize that most of the enrollment growth in the for-profit sector over the past decade has come at schools with a big online presence and nationwide reach and not at local for-profits.

Jobs in the healthcare sector that did not require any sort of certificate or license showed a similar pattern -- applicants with certificates from public schools on their resumes got significantly more callbacks than applicants with certificates from for-profit schools. But for more advanced jobs that did require a certificate or an occupational license, like postings for vocational nurses and pharmacy technicians, the effect mostly disappeared. The authors hypothesize that when employers have an outside, objective source of information about a candidate (like a licensing exam score), college credentials are less important.

The responses for jobs with no bachelor’s requirement were even more disheartening for the for-profit “applicants.” In many cases, a for-profit associate’s degree did not result in higher call back rates than for applicants with no college experience listed at all.

Of course, all of the applicants in this study were fictitious, so the researchers can’t say anything definitive about whether real-life students with degrees from for-profit or online colleges are poorly prepared for the job market, and there is no way to tell what the eventual placement and salary outcomes would have been had the fake applicants somehow been allowed to progress farther through the job application process.

The authors also caution that differential callback rates could still partially be a reflection of recruiters’ beliefs about the types of people who attend for-profit colleges in the first place (rather than the quality of education to be found there). Even so, the results suggest that some graduates may face an uphill battle going on the job market with a for-profit college on their resume, especially if they have no other credential, test result, or occupational license to validate them. ♦

“The Value of Postsecondary Credentials in the Labor Market: An Experimental Study” appears in the March 2016 issue of the American Economic Review.