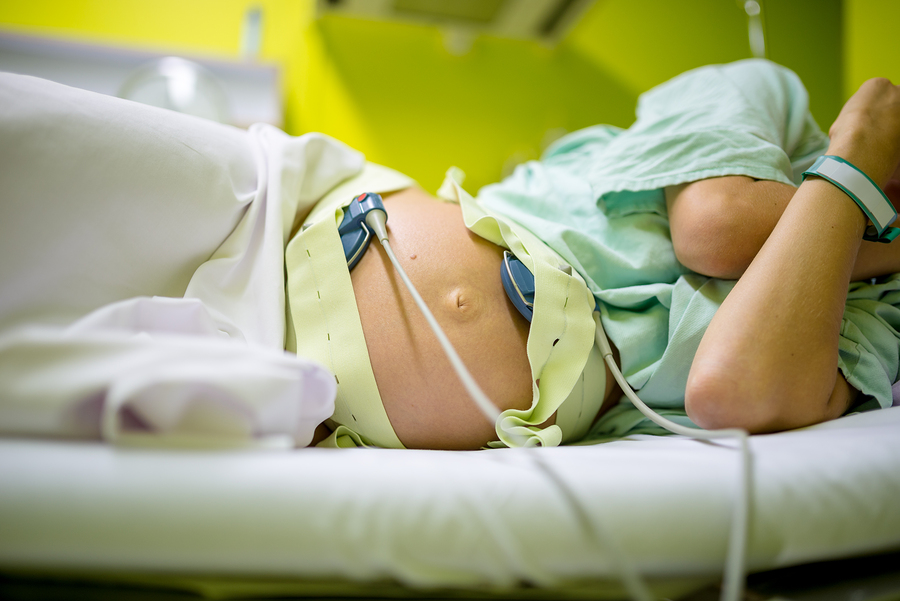 An expectant mother undergoing cardiotocography. While some C-sections are planned and scheduled in advance, most are prompted by complications that arise during labor.

In most markets, consumers are trusted to make their own decisions. But sometimes providers – think auto mechanics or plumbers – know a lot more than the customers they are serving. Customers probably don't understand what exactly they need to buy: they just know they want their car or sink to work again.

This leaves room for sellers to convince buyers they need more services than they really do, inducing new demand to create more profits. The auto mechanic who recommends an unnecessary fuel system cleaning or the plumber who wants to replace a perfectly good water heater is taking advantage of a big information asymmetry between provider and customer.

A patient at a doctor's office or hospital is a customer too, and in many contexts physicians and hospitals can earn more money if they provide extra medical services, which can range in seriousness from an unnecessary throat culture to a questionable elective surgery. Since patients' insurance plans will tend to shoulder most of the costs anyway, patients are not likely to object when a trusted doctor in a white lab coat recommends a medical procedure.

Physician induced demand (PID) is a major concern for health economists, and unnecessary medical spending is estimated at about $200 billion in the U.S. each year by the Institute of Medicine. This tally does not even include added patient discomfort or future health complications that can result from medically unnecessary care.

Then again, PID can be hard to detect because it can be difficult for researchers looking at treatment data after the fact to know which treatments were legitimate and which weren’t really necessary. But what happens with those few patients who aren't any less informed than the doctors treating them? A an article appearing in this month's issue of the American Economic Journal: Economic Policy examines birth records from California and Texas to see if obstetricians treat patients with MDs differently from other patients in the delivery room.

In Physicians Treating Physicians: Information and Incentives in Childbirth (PDF), authors Erin Johnson and Marit Rehavi focus on the Cesarean section or C-section, which is the most common inpatient surgery in the U.S. They analyze confidential hospital data to determine which mothers are most likely to undergo C-sections during delivery, comparing mothers who are themselves doctors to ordinary patients without medical training in an effort to detect physician induced demand.

The decision about whether to deliver a baby via C-section can be a tricky one. In a few clear-cut cases (like when the placenta is blocking the uterine opening), a C-section is clearly the right path and is usually scheduled beforehand, but these are rare: vaginal delivery is attempted about 90% of the time. If complications arise during labor, a doctor must weigh the risks of switching course and proceeding to an invasive surgery that can have complications for mother and infant alike.

In many of these situations, there is no clear medical consensus about whether a C-section is necessary and indicators of fetal distress such as from a fetal heart monitor can be inconclusive. Oftentimes, the obstetrician simply has to make a judgement call based on years of experience delivering babies. Whatever the doctor chooses, a mother in labor who doesn't have any obstetrical knowledge herself will be ill-equipped to second-guess that decision.

Medical decision making during childbirth is especially well-suited to testing for inducement ... There is a well-documented payment wedge for C-sections relative to vaginal deliveries under FFS [fee-for-service] and an information asymmetry between [obstetricians] and patients. Less-informed patients typically cannot even reduce the asymmetry by seeking an independent second opinion during labor.

The authors argue that the complexity of this decision leaves an opening for physician induced demand, which might in turn help explain a long-running runup in C-section rates nationwide. They develop a model to make predictions about when and where C-section rates would be higher if some obstetricians are taking advantage of their patients' medical ignorance.

Doctors would have several reasons to prefer C-sections to natural childbirth in marginal cases: more income, more convenience in planning and scheduling, and fear of malpractice lawsuits. In the model, doctors must choose whether to recommend a C-section to each patient as labor unfolds, and they face a tradeoff between their own interests and patient dissatisfaction.

Being more aggressive about recommending C-sections will result in more earnings for hospitals and doctors over time, less malpractice risk, and will avoid the inconvenience of prolonged vaginal deliveries. Yet it also runs a risk of alienating those patients who are savvy enough to detect when the surgery is unnecessary.

Naturally, patients who are themselves physicians (many of whom would have some experience delivering babies during clinical rotations in med school) are less likely to defer to doctors’ recommendations and more likely to bristle when an obstetrician is too quick to resort to Cesarean delivery.

The model has two main predictions: all else equal, obstetricians will recommend and perform more C-sections when a) they have a greater financial incentive to do so and b) their patients are less likely to be informed about the right clinical decision.

To test these predictions, they look to confidential birth data from hospitals in California and Texas. California is a good testing ground because a decent fraction of hospitals are run by HMOs where doctor incentives are different. HMO doctors tend to be salaried rather than paid partially on the basis of what procedures they perform, so they have little or no financial incentive to increase C-section rates beyond clinically-necessary levels (in fact, they have incentive to perform fewer C-sections).

This allows the authors to test both hypotheses at once. According to the model, C-section rates for physician mothers should be lower than rates for the general population because they are more resistant to PID. But the difference should mostly disappear at HMO hospitals, where obstetricians have little reason to pursue extra C-sections in the first place. The rates of unscheduled Cesarean sections shown in the figure below suggest the authors are onto something.

Are physician mothers better at avoiding C-sections?
Unscheduled Cesarean delivery rates at California hospitals by hospital type, 1996-2005. At HMO hospitals, where doctors are generally salaries and not paid per procedure, rates are similar for physicians and non-physicians. At non-HMO hospitals, however, physician mothers have significantly fewer unscheduled c-sections.
Note: Data for first births only.
Source: adapted from Table 2 in Johnson & Rehavi (2016)

Mothers who happen to also be physicians are a small population and have some special characteristics: by definition they are more educated than most of the childbearing population, and they tend to be older and come from higher-income neighborhoods as well. Could that be driving the differences in the figure above?

The authors estimate a model that controls for demographic factors and find that the difference holds up: mothers with MDs are 11% less likely to have an unscheduled C-section than non-physician mothers with similar characteristics.

The childbirth data from Texas provides some additional information on physician mothers, including their medical speciality. The authors hypothesize that physician mothers with more directly relevant knowledge (like anesthesiologists or pediatricians) might be even better informed than doctors with other specialities like psychiatry. Sure enough, they find that C-section rates are lowest for those doctors with training most relevant to surgery, childbirth, and infant care.

Looking at follow-up data on complications for mothers and infants, the authors find that these C-section reductions are achieved without any increase in bad outcomes for mothers, and their infants actually fare better in the days after birth, with less need for intubations and fewer infections.

Physician mothers also have lower total hospital charges, partially thanks to the lower rate of C-sections. This implies that the occasional extra C-section performed on less savvy patients is not only failing to reduce complications – it is also contributing to rising medical costs.

Cesarean delivery rates have been rising in recent decades, and the evidence uncovered by the authors suggests that physician induced demand could be playing a role. The authors note that if all patients were treated as efficiently as patients with MDs, Cesarean delivery rates would likely drop low enough to meet a U.S. Department of Health and Human Services goal for a 10% reduction by 2020. But strong financial incentives for doctors and hospitals means that less informed mothers are likely to continue to receive C-sections more often than they really should. ♦

"Physicians Treating Physicians: Information and Incentives in Childbirth" appears in the February 2016 issue of the American Economic Journal: Economic Policy.