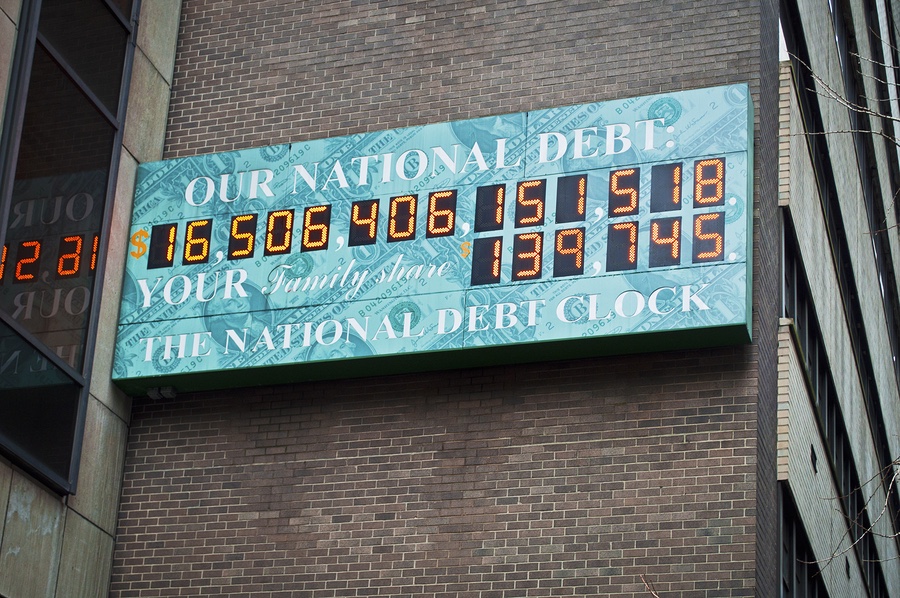 The National Debt Clock in Manhattan maintained by the Durst Organization. The U.S. national debt hit $18 trillion in 2014.

In recent years, many have called for measures to combat financial impatience with insights gleaned from behavioral economics. Alarmed by a widespread lack of retirement savings, for example, some observers have advocated greater use of illiquid savings accounts like individual retirement accounts (IRAs). An article appearing in the June issue of the American Economic Review explores how this might backfire by driving up the national debt.

In Government Policy with Time Inconsistent Voters (PDF), authors Alberto Bisin,Alessandro Lizzeri, and Leeat Yariv develop a model economy populated by individuals who have "time inconsistent" preferences about the future. Time-inconsistent people are not merely impatient — they are more impatient than they want to be. Someone who never plans to go to the gym because he doesn't want to delay leisure time is impatient, but someone who plans to go to the gym and then decides not to at the last minute is time-inconsistent.

When it comes to retirement, this self-control problem can have serious effects: people will make an earnest plan to save for retirement at first but then decide the next year they want to withdraw their savings and buy a new house or car. Played out over a lifetime, this pattern can leave regretful retirees with almost no savings.

Illiquid assets that are harder to access before retirement seem like a great way to counteract this syndrome. Savers are happy to use them because they anticipate their future selves wreaking havoc with their plans. This has motivated some economists to endorse their wider use, but this strategy depends on a conception of government as a benevolent, parental presence that guides citizens away from mistakes. If voters who are time-inconsistent begin to act on those impulses in the voting booth, this assumption may not hold.

Use of illiquid retirement accounts has risen over time
Retirement assets in the U.S. 1974–2014, adjusted for inflation. IRAs and 401(k)s spur savings by providing tax benefits and penalizing early withdrawal, but helping people save with illiquid investments might backfire.
Source: Investment Company Institute

To explore the implications, the authors develop a model of consumption and savings in a world where politicians are aware of voters’ time-inconsistent urges. At the beginning of the model, voters will seek to commit themselves to saving for the future and not raiding their savings too soon. To do this, they invest in illiquid assets that they can not access until retirement (an IRA that penalizes early withdrawals might be a real-life analogue to these accounts).

But at some point, the voters' time inconsistency kicks in, and they will start regretting their decision to put money in accounts where it cannot be withdrawn (which means the accounts are working exactly as intended). However, canny politicians propose a new policy: create a new payout to all voters financed with government debt that will be paid back in the future. This is the perfect solution for voters who want to undo their earlier savings commitments.

Voters realizing this prospect will anticipate more debt in the future, which can be something of a self-fulfilling prophecy. Voters move even more savings into illiquid accounts to counteract the future government's actions, which only serves to increase the demand for relief in the next year's elections. If voters are highly impatient, only a firm debt ceiling that cannot be altered by the government will suppress this vicious cycle (although at least in the U.S., real-life debt ceilings are not so rigid).

In this way, government policy as approved by time-inconsistent electorates can nullify savings commitment devices. Voters are actually left worse off than they would have been with no illiquid savings options because not only have the long-term savings plans been undermined, but the government has also accumulated new debt. This debt has additional costs like higher interest rates or the necessitation of new taxes that will distort the economy.

Couldn't private actors like credit card companies act as enablers in just the same way? Why is public debt different? The crucial difference is that the level of public debt is controlled by a collective, democratic process, rather than an individual decision.

If a saver knows that she will be tempted in the future by a credit card company offering an exorbitant rate of interest, she can move some of her savings out of the illiquid account — enough so she won't be tempted to go into costly personal debt later. But if this same saver is part of an electorate that is likely to vote for a payout anyway, she is forced to go into debt along with everyone else, even if she foresees the harm in doing so. If illiquid accounts had not been available in the first place, voters would not have locked away their savings and would not have to resort to costly public debt.

This result casts proposals for more and stronger illiquid savings options into doubt, although many of the simplified features of the model might not apply to a real-world economy. Future empirical research might illuminate whether rising public debt levels in the developed world can be at least partially ascribed to time-inconsistent preferences. The authors conclude with a call for future policies intended to improve the wellbeing of a "behavioral" electorate to first be analyzed for their political repercussions. ♦

"Government Policy with Time Inconsistent Voters" appears in the June 2015 issue of the American Economic Review.