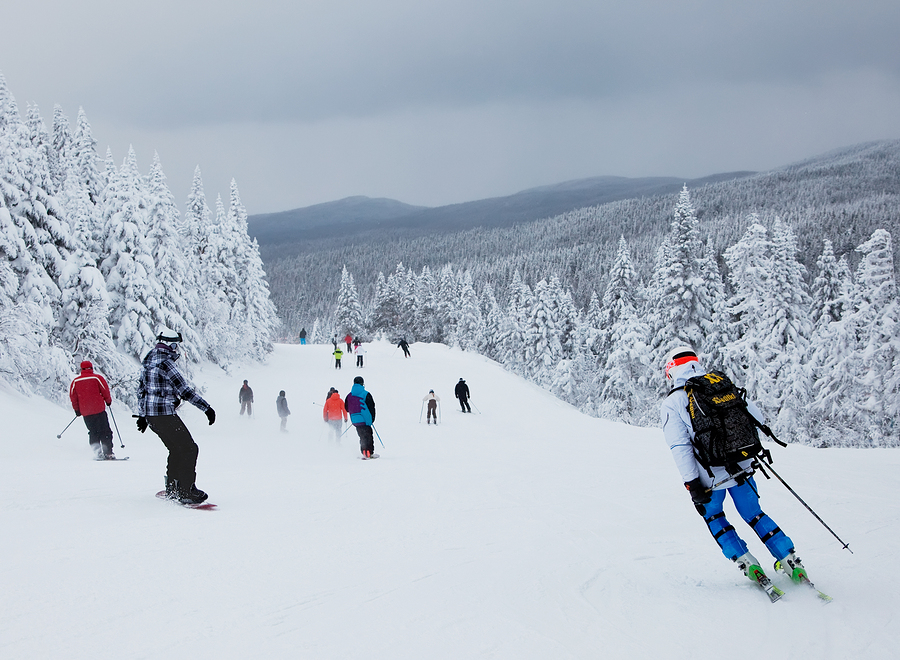 Skiers enjoy a day on the slopes in Mont-Tremblant, Quebec on February 9, 2014.

From the perspective of firms, the appeal of deceptive advertising is clear: the opportunity to lure in a bigger group of customers without having to make any costly investments to actually improve the product being sold. Of course, this benefit has to be balanced against the legal and reputational risks of being exposed.

But while there are theoretical economic models that make predictions about where and when firms will decide to skirt the truth in their advertising campaigns, there is little data to test these predictions and little sense of how widespread false advertising actually is. An article appearing in this month's issue of the American Economic Journal: Applied Economics looks to snow announcements from ski resorts for some forensic economic evidence of deceptive advertising.

In Wintertime for Deceptive Advertising? (PDF), authors Jonathan Zinman and Eric Zitzewitz argue that ski resort snowfall reports are a good setting to study deceptive advertising in action because fresh, natural snow is an important aspect of ski resort quality for many skiers, and because the National Weather Service collects similar data about snowfall in different locations without any obvious incentive to deviate from an accurate measurement.

In the past decade most ski resorts have taken to reporting daily "fresh snow" totals both on their own websites and through third-party websites that aggregate snowfall totals from resorts all over the world. Each day's announcement serves as a mini-advertisement about the quality of skiing conditions that day, and each announcement presents a quandary for resorts: should they play it straight or fluff the numbers?

The authors use an internet archive to compile a dataset of over 56,000 single-day snow reports from hundreds of different U.S. and Canadian ski resorts on OnTheSnow.com from 2004 to 2008. They find that ski resorts announce new snow totals that are about 15 or 20% greater than nearby 24-hour snowfall totals reported by a National Weather Service system called SNODAS.

This finding it and of itself is not particularly suspicious – the SNODAS model reports snowfall totals for points on a very dense geographic grid, but even so, the nearest SNODAS reading may correspond to a point on the map that is several hundred meters from the site where the resort measurement was taken.

As the authors point out, ski resorts are generally designed with local microclimates in mind, so most ski slopes are optimally situated on the snowiest part of the local terrain. It would not be too surprising if resorts could consistently claim slightly higher snowfall than measurements from the surrounding area would indicate.

According to ski resorts, it snows more on the weekends
A comparison of new snowfall totals reported by ski resorts and 24-hour snowfall data for the same sites collected by the National Weather Service SNODAS system, spanning 320 U.S. resorts and four ski seasons in the mid 2000s. Resort-reported snow was significantly higher on Saturdays and Sundays. 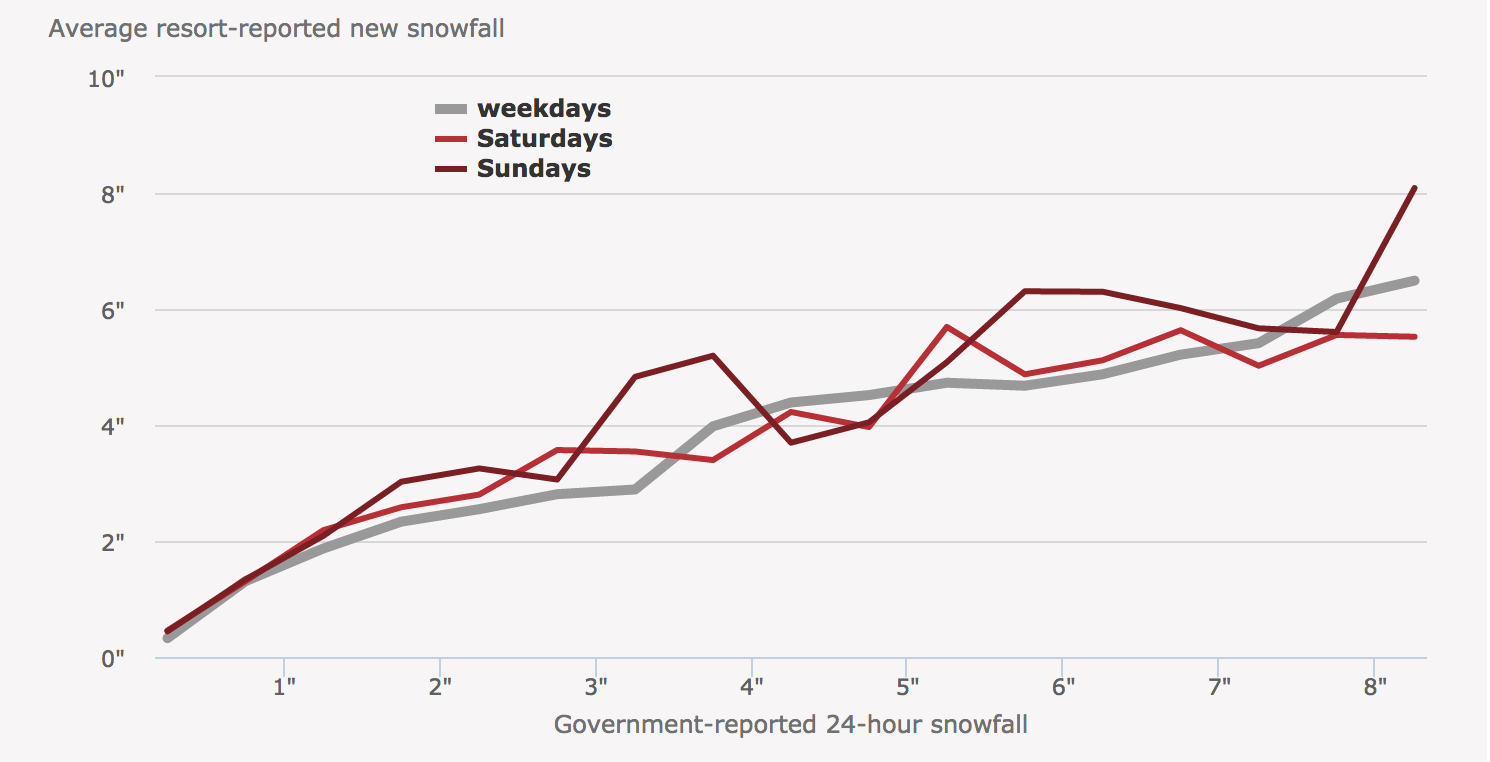 But the authors note another pattern that can't be explained simply by opportunistic ski slope placement. Resort-reported snow totals are higher on the weekends, and the spread between resort reports and government measurements is greater on the weekends as well, even though the bulk of climatology research suggests that weather is essentially uniform across days of the week. Given the extent of the difference (12-23% more reported snow on weekends) and the large sample size, the authors figure that this discrepancy is very unlikely to be a coincidence.

This exaggeration behavior also seems to vary across resorts. Resorts with a greater proportion of their courses rated as expert terrain exhibited an ever greater "weekend effect," perhaps because the advanced skiers these resorts attract care a lot about skiing on fresh powder. Meanwhile, resorts with money-back guarantees for those who only ski down the course once had less of a tendency to exaggerate than resorts with no such warranty.

There is at least one big reason to think that deceptive advertising may be a strong temptation in this particular market. Resorts tend to be situated far from population centers and from each other, so there is a premium on attracting people to the resort site by whatever means necessary. Even if skiers are disappointed by the conditions when they actually get out on the slopes, they probably won’t decide to drive many miles to the next resort over.

There are also some things about the market that make deceptive advertising less of an obvious strategy. When skiers arrive at the resort, the fresh snow claim can be quickly verified or rejected, unlike some deceptive ads which proclaim nebulous health benefits or promise that a product will hold up for years. Meanwhile, ski operations are expensive to build and completely immobile, so there is no scope for committing outright fraud and then leaving town, as an unscrupulous merchant or travelling salesman might be able to do.

The motivations and mechanisms for deceptive advertising in this context are not totally clear, but the authors note that their study is missing a key piece of the puzzle: customers. They lack data on how demand shifts across resorts or over time on a detailed timescale that would allow them to infer something about how and whether these exaggeration strategies are working.

We lack any high-frequency data on prices or quantities sold, and hence cannot measure the demand responses to snow reports. This prevents us from sharply testing across the models discussed at the outset or measuring the welfare implications of (changes in) advertising practices.

For instance, daily or hourly data on lift ticket sales could indicate when people are most sensitive to ski depths. Perhaps weekend skiers are more causal customers who will go to whatever resort is nearby, while weekday skiers are more serious about finding the best conditions. Information like that could help us interpret the exaggeration patterns found in the reporting data. The authors point to this as a promising avenue for future research.

The authors conclude with an optimistic note about the power of monitoring technology to combat deception. On January 8, 2009, one popular reporting site introduced an iPhone app that allowed skiers to file live reports from the slopes which were then posted alongside the resort's official measurement. The authors find suggestive evidence that the weekend effect disappeared entirely after January 8 of that year – but seemingly only at resorts that had internet reception for iPhones. ♦

"Wintertime for Deceptive Advertising?" appears in the January 2016 issue of the American Economic Journal: Applied Economics.

Patient people are much more likely to finish school