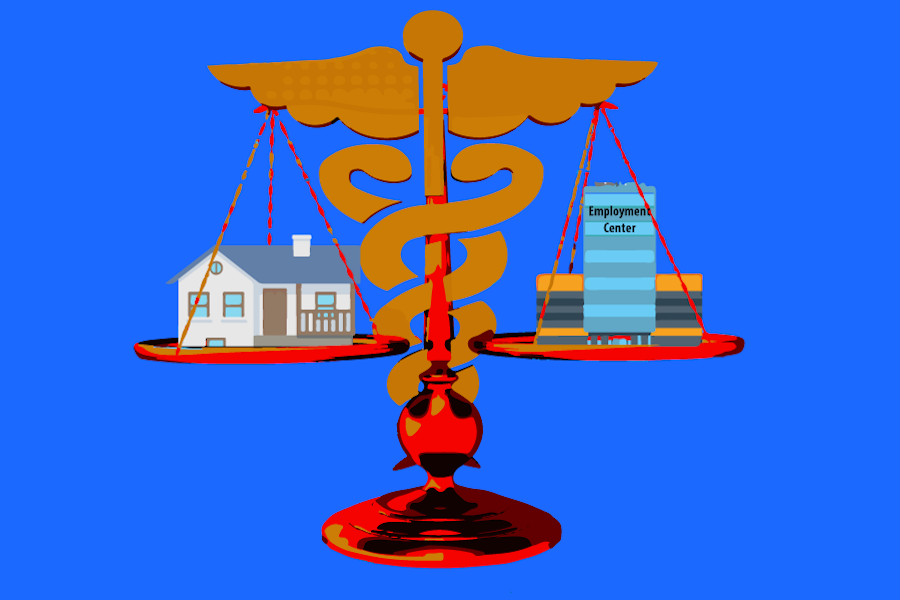 A job is more than a paycheck for most people.

It can provide one with a sense of purpose and opportunities to form valuable workplace relationships. There’s also financial compensation beyond the wage.

In the United States, one of the biggest advantages of employment is access to health insurance, cited in employee surveys as the most important benefit workers receive.

But if people could get health coverage without having a job, how would that change their incentive to work? Would they still spend as many hours laboring away in order to qualify for coverage? If unemployed, would they search as aggressively for a job?

Laura Dague, Thomas DeLeire, and Lindsey Leininger explore these questions in a paper that appears in the May issue of the American Economic Journal: Economic Policy.

Economic theory suggests that one possible consequence of extending public health insurance could be a reduction in labor market activity but the literature has been mixed. Some researchers have concluded there would be a dramatic drop in the pool of available workers while others have determined little if any impact. This paper offers evidence of a decline.

“I think that the theory is strong with this, with respect to the effects of public benefits on labor,” Dague said in an interview with the AEA.

The study comes at a critical time for health care in the United States. Republican efforts to repeal the Affordable Care Act include deep cuts to Medicaid and appear to be creating  uncertainty in the insurance market. The paper offers valuable insight for policymakers as they debate the merits of expanding Medicaid coverage to a broader swath of the population.

The Politics of Public Health Insurance
The Affordable Care Act passed in 2010 gave states the opportunity to expand public health insurance via Medicaid to low-income adults without children. Not every state seized the opportunity, and these decisions often pitted politics against the needs of its low-income citizens. The map below shows which states expanded coverage and how that relates to the presidential candidate that won that state in the 2016 election. It also shows the share of each state's population on public health insurance in 2015.
Source: Kaiser Family Foundation

Dague and her colleagues were curious about the labor market impact from giving public insurance to low-income childless adults. The Affordable Care Act allowed states to extend Medicaid coverage to low-income people without children, a population that has historically not been eligible for the program.

The researchers collected data from Wisconsin, which in 2009 launched a program called BadgerCare Plus Core to cover low-income adults without kids. The demand was so great that the state had to stop accepting new applications just over 3 months after enrollment began. Tens of thousands of people ended up getting waitlisted.

Dague and her co-authors analyzed administrative records on the program’s applicants, as well as earnings records from the state’s unemployment insurance system, and found that people who received public health insurance were 5.2 percentage points less likely to be employed compared to people who were waitlisted. They also earned roughly $300 less per quarter.

Though the impact was more mild than some other papers have suggested, it was still significant. Nationally, the impact would be the equivalent of 1.1 million fewer people being employed if the ACA’s Medicaid expansion covered an additional 21.3 million adults.

Not that people were quitting their jobs once they got covered, Dague said. Rather, the evidence suggests that the impact was primarily on people who were already unemployed and just had less incentive to look for a job than people who got waitlisted.

I think that the theory is strong with this, with respect to the effects of public benefits on labor.

The lessons for policymakers considering Medicaid expansion aren’t so clear. There are some differences between Wisconsin’s Core program and Medicaid that make it difficult to extrapolate the results nationally. For example, Medicaid is an entitlement that allows enrollees who leave the program to re-enroll if their situation changes. That’s not the case for Core. If someone were to leave the Core program because they got a job with health insurance, then they couldn’t re-enroll at a later date, creating a strong “lock-in” effect that gives them a stronger incentive to stay out of the workforce in order to maintain coverage.

And even if the results could be perfectly extrapolated, they don’t necessarily suggest that Medicaid shouldn’t be expanded to childless adults.

There are also other considerations beyond employment.

“There are important benefits from these programs,” Dague said. “If we were going to make evidence-based policy, we should consider the costs and benefits of these type of calculations. And I think that’s true for all of these insurance programs.”

The Effect of Public Insurance Coverage for Childless Adults on Labor Supply appears in the May issue of the American Economic Journal: Economic Policy.