What are the GDP data hiding?

Moving toward a more nuanced accounting of economic well-being 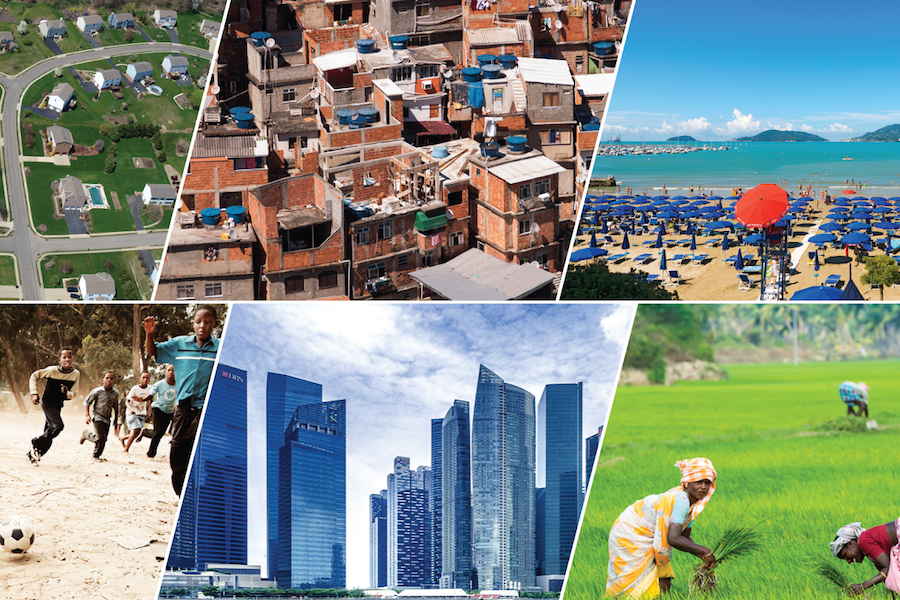 Why are some countries rich and some countries poor? It’s often the first question that students encounter in their introductory macroeconomics classes. But this formulation skips over a non-trivial point: how do we even tell if a country is rich or poor in the first place?

Traditionally the easiest way to answer that question has been to look at the sum total value of goods and services produced in a country and add them all up. This is the familiar gross domestic product (GDP) measure; divide it by the population of a country, and you get a rough sense of how much stuff a country is producing for itself each year.

Under this rubric, the United States is one of the richest countries, with a GDP per capita of $56k per year in 2015 according to the World Bank. This suggests that the average American earned enough last year to afford $56,000 worth of goods and services (including government services like national defense and highway construction).

Some developing countries are only a quarter as rich (Lithuania), or a tenth (Jamaica), or a hundredth (Somalia), while a few small countries like Qatar and Luxembourg far outpace the U.S. But people have long realized that this approach doesn’t capture everything about how nice it is to live in a country. In Beyond GDP? Welfare across Countries and Time (PDF), authors Charles Jones and Peter Klenow propose a new way to measure economic well-being.

The authors note that there is a long history of people criticizing the GDP measure as incomplete, including a famous speech by Robert F. Kennedy where he said that GNP (a close cousin of GDP more common at the time) “measures everything in short, except that which makes life worthwhile.” A factory belching pollution or an inefficient bureaucracy full of paper pushers contribute positively to GDP, while a lovely evening spent in the company of family and friends might technically contribute nothing to the national accounts. What about the importance of leisure time, inequality, public health, pollution, and political freedoms?

The U.S.-France comparison, and our results for other countries, emphasize an important point. High hours worked per capita and a high investment rate are well- known to deliver high GDP per capita, other things being equal. But these strategies have associated costs that are not reflected in GDP. Our welfare measure values the high GDP but adjusts for the lower leisure and lower consumption share to produce a more complete picture of living standards.

Some agencies and academics have developed “mashup” indices that measure these factors in different ways and weigh them against the more straightforward measures like GDP. Perhaps the best known is the Human Development Index (HDI), which takes educational levels and life expectancy into account to try to form a more comprehensive picture of each country’s economic wellbeing.

But the fact remains that people don’t derive happiness or wellbeing directly from a year spent in school or a disease-free environment -- they relish what those things allow them to enjoy in terms of overall lifetime consumption. There is also a question of how best to apportion weight between these factors. Who’s to say whether an additional year of life expectancy or educational attainment is worth an extra $1,000 of GDP per capita?

Jones and Klenow propose a more systematic approach based on the philosophical notion of the veil of ignorance developed by 20th century philosopher John Rawls. They imagine a hypothetical baby about to be born somewhere on earth, to an unknown family of unknown means. If this baby wants to get the most out of life, which country does she hope to be born into?

A naive baby might hope to emerge into a hospital in Qatar or Luxembourg where average incomes are the highest, but there is more to consider. She doesn’t know if she will be born to a working class family or inherit a trust fund, so countries with oppressive inequality are much riskier and less attractive than egalitarian ones. She also has to consider how long she will be able to enjoy her life -- a country where an infectious disease could cut her life very short will be proportionally less appealing.

She also might want to avoid a workaholic society in favor of one where people have shorter workweeks and retire early. The downside of a nation working to build up a higher GDP may be less time to enjoy the fruits of its labors.

The authors develop a measure of economic wellbeing they term “welfare” that measures the relative appeal of being born into unknown circumstances in each country (accounting for uncertainty about social class and lifespan), standardized against the U.S. income path. From behind the veil of ignorance, being born into a country with a welfare score of 50 would be just as good as being born into the U.S. and then having half of your lifetime consumption stripped away.

The authors analyze a wealth of data sources with information on inequality, leisure time, and life expectancy across countries and then compute welfare scores for 140 countries.

Global inequality may be worse than the GDP statistics suggest
2007 GDP per capita (left) and the authors' welfare measure (right) for 140 countries, both relative to the United States. Countries in Europe, especially eastern Europe, come out ahead thanks to high rates of leisure, longer life expectancies, and lower inequality. Oil-rich countries are penalized for low rates of consumption and high levels of inequality, while lower life expectancies hold back welfare in the AIDS-ravaged countries of southern Africa. 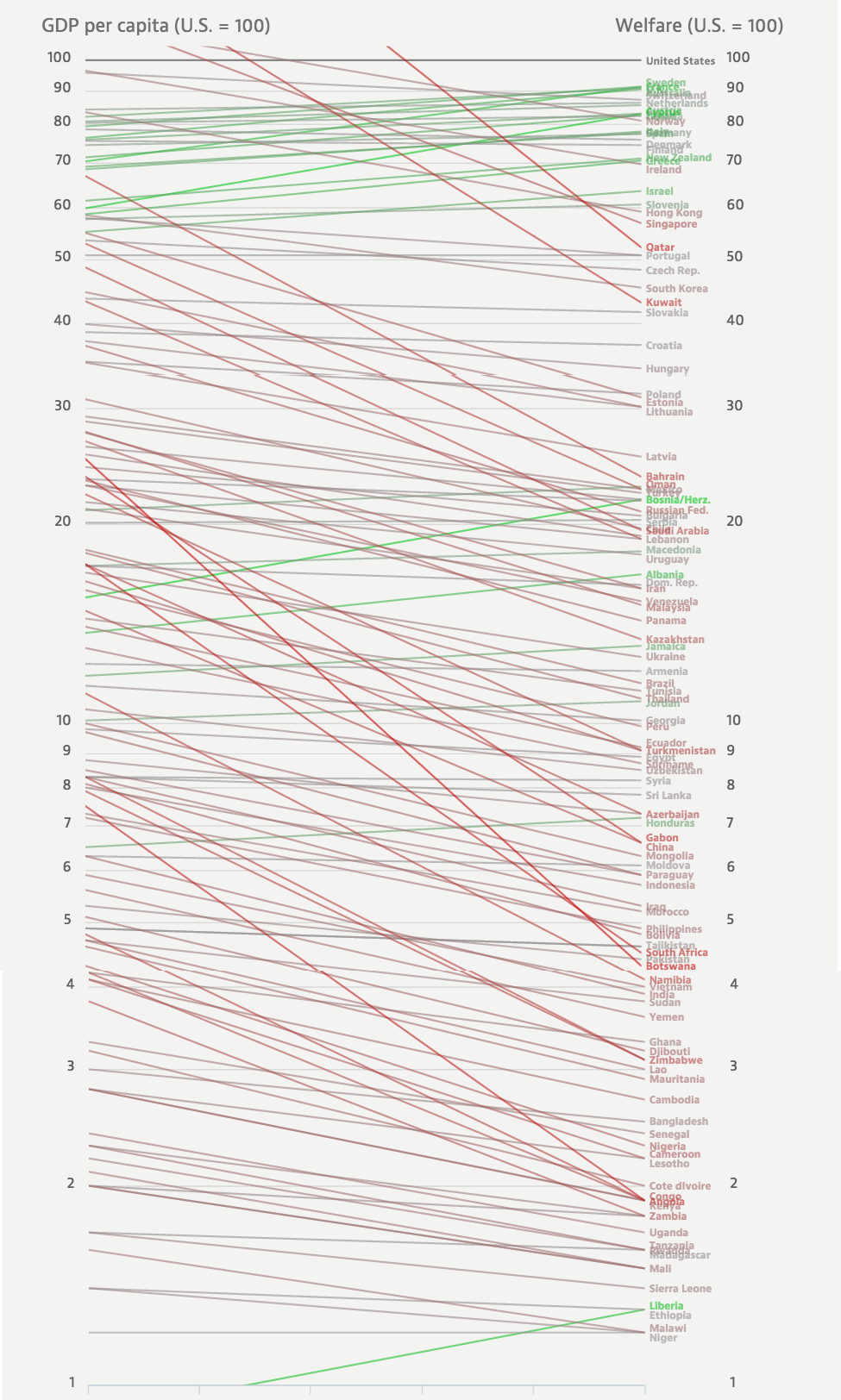 Countries in Europe with relatively high life expectancies and leisure time look better in this light, with many welfare scores approaching 100. Developing countries that already rank pretty far down the GDP ladder tend to do even worse under the authors’ measure thanks to low life expectancy and greater inequality.

A few oil-rich states like Norway and Qatar invest more and spend less on consumption (essentially saving oil wealth for future generations), which means their GDP figures give an inflated sense of how much they get to consume.

This approach avoids some of the pitfalls of the mashup index because it relies on survey data from the U.S. on people’s actions and labor market decisions to tell us how much they value tradeoffs, like earning more money versus having more time off. It also builds on past research into the value of a statistical life to determine how people trade off longer lifespans for diminished income.

The major takeaway is that the world as a whole looks much more unequal under this measure --  some of the recent gains of countries in Africa and Latin America are tempered by the fact of low life expectancy, while the semi-rich countries of Europe (whose GDPs tend to lag significantly behind the U.S.) look pretty comparable when leisure time and inequality are considered.

It still doesn't consider other things that are important, like political repression or public safety (to the extent that these are not actually affecting life expectancy). As we can see from refugee flows around the world, those things matter a lot to wellbeing, too. The authors’ welfare index is an initial attempt at understanding cross-country comparison on a firmer theoretical footing.

"Beyond GDP? Welfare across Countries and Time” appears in the September 2016 issue of the American Economic Review.