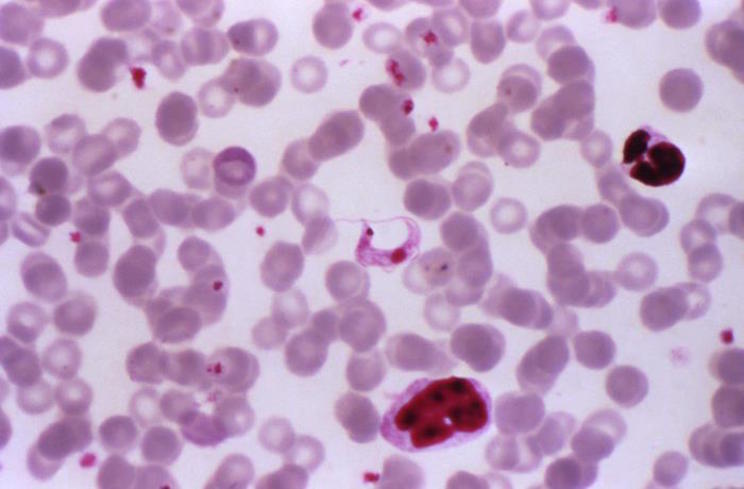 A closeup of Trypanosoma cruzi parasites in a blood sample. The varying concentration of pathogens like T. cruzi (which is responsible for Chagas disease) across different geographic regions may help explain why some countries developed sooner than others.

For most of human history, economic growth rates were quite low by modern standards. The historically high growth rates in developed countries over the past two centuries have recalibrated expectations, making it easy to forget that economic growth rates were near zero for millennia. Over the same period, life expectancies have lengthened, child mortality has plummeted, and there has been a dramatic decline in birth rates across most of the world.

One strand of research in the economic growth field has focused on a developing a "unified" theory of growth that can explain not only how countries grow now, but why they grew so slowly for so much of history, and what triggered the economic and demographic transition in some places much sooner than others. A paper appearing in July issue of the American Economic Journal: Macroeconomics presents a new unified growth model predicated on the idea that differences in the concentration of various pathogens (like those causing malaria and yellow fever) can explain different growth paths across countries.

In The Economic and Demographic Transition, Mortality, and Comparative Development(PDF), authors Matteo Cervellati and Uwe Sunde note similar economic patterns in the transition process across different countries. Demographers have established that the transition happening in Sweden and England during the 1800s bear a striking statistical resemblance to transitions in East Asia during the 1900s and transitions happening in sub-Saharan nations today. The authors’ hypothesis is that each country follows a substantially similar transition process, and that the major difference between countries is in the timing of that transition.

The authors develop a model that starts from a set of simple assumptions about how societies grow and develop:

The authors show that this model, simulated over a long timespan, can match historical patterns: a long period of quasi-stagnant growth and high mortality are followed by a relatively sudden "take off" that culminates in a high-growth, low-mortality steady state. The take off is accomplished when positive feedback loops between education, technology, and life expectancy reach a sudden tipping point.

The stylized patterns of long-run development dynamics are very similar across countries and times, including forerunners like Sweden and England as well as countries that entered their demographic and economic transition much later than the European forerunners.

Beyond the basic assumptions about incentives, the model is agnostic about certain empirical facts: How uneven is the spread of ability in the population? How much does education contribute to rising life expectancy? How fast does the economy need to be growing before parents will start having fewer kids?

To teach the model about these relationships, the authors use historical data from Sweden. Taking Swedish datapoints from the years 1800 and 2000, the authors calibrate the model so that its output will match those numbers. When the authors run the model with these inputs starting in antiquity, it is able to roughly match the non-linear patterns in Swedish mortality, fertility, and economic growth over the entire period from 1750 to 2000, even though it was based on data from just two years.

The authors main goal is to demonstrate the applicability of the model to many different countries, allowing for only one difference between countries: initial life expectancy. Because the model assumes that people will invest less in education and have more children under high-mortality conditions, this is enough to induce countries to begin their transitions at radically different times.

Charting the course of the demographic transition
The demographic transition path of a typical country in the authors' model (in red) charted aganist the historical transition paths of 141 countries from 1960 to 2000. Many transitions hew closely to the model's path.
Source: adapted from Figure 3a of Cervellati and Sunde (2015) using the Barro-Lee education dataset and World Bank fertility data
The authors create a simulated planet Earth including a multitude of fictional countries with varying mortality rates, some very low (like Sweden) and some very high (like sub-Saharan nations with high concentrations of deadly pathogens). Given the tipping-point structure of the model, even small differences in mortality rate can lead to wide disparities in the development trajectory.

Although the model was trained based on data over time from just one country, this simulated Earth is able to mimic real-life patterns across countries. For instance, the fictional planet Earth replicates the famous Preston curve relationship between life expectancy and income, and the relationship between child mortality and education in the simulated world is similar to that seen in real cross-country data from 1960 and 2000. This suggests there is some truth to the idea that the transitions of each country are fundamentally similar processes rather than completely independent and idiosyncratic developments.

Ultimately, the authors demonstrate the ability of a model to credibly match growth patterns over time, and cross-country patterns at a single point in time, while assuming that countries are identical except for their mortality rates. This lends credence to their hypothesis that pathogen density could be one of the main drivers of differential economic development, but future research can help determine the relevance of other country-specific factors. Additionally, the model discounts the possibility that one country’s development could influence that of a neighboring country, perhaps through the sharing of new medical discoveries. More work is also needed to account for these kinds of spillovers in a historical growth framework. ♦

"The Economic and Demographic Transition, Mortality, and Comparative Development" appears in the July 2015 issue of the American Economic Journal: Macroeconomics.