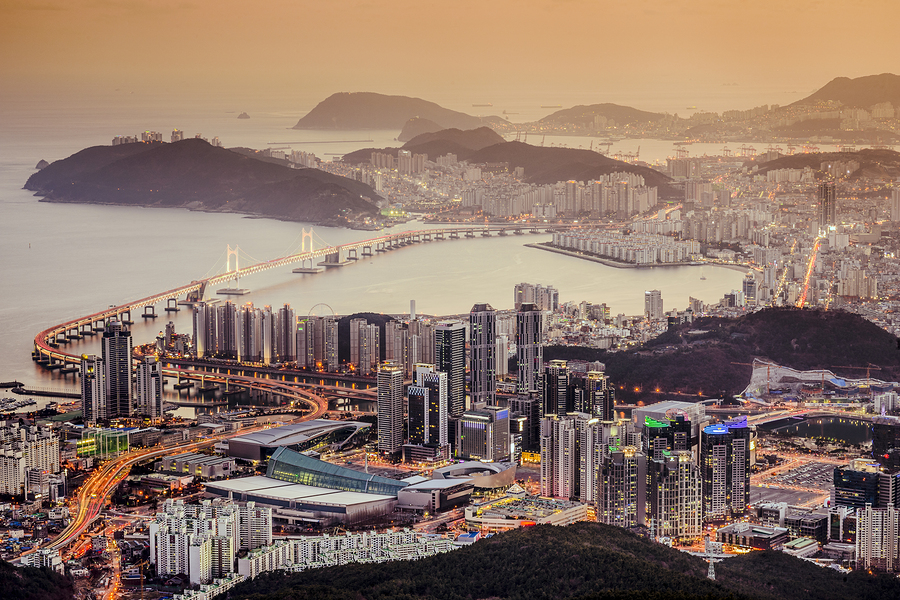 The skyline of Busan, South Korea. After serving as a provisional capital during the Korean War, Busan grew into a manufacturing center with a major port.

In 1953, the young nation of South Korea had just finished fighting a devastating war. Hundreds of thousands of its soldiers and civilians had been killed or captured, the economy was in shambles, and the populace was largely dependent on foreign aid. Starting from the early 1960s and continuing for about four decades, the country saw a remarkable stretch of sustained economic growth. Today, Korea enjoys a standard of living close to that of the advanced nations and has high marks for political freedom and relatively low income inequality.

Some trade, development, and growth scholars have been dubious about the ability of trade policy to substantially affect a country's growth, but there is circumstantial evidence that trade played a large role in what has been dubbed the "Korean growth miracle." One of South Korea's leaders, Park Chung Hee, put an emphasis on growing the country's manufacturing base through trade and instituted 38 separate trade reforms during his 18 years in power. An article appearing in this month's issue of the American Economic Journal: Macroeconomicstries to determine what fraction of the Korean economic miracle can be credited to trade reforms made by South Korea and its trading partners.

In How Much of South Korea's Growth Miracle Can Be Explained by Trade Policy? (PDF), authors Michelle Connolly and Kei-Mu Yi highlight three key changes in trade policy during this period that they think may have played a significant role in Korea’s development. The first came in the early 1960s when Korea created a tariff exemption that lowered tariffs on intermediate inputs (like car engines) and capital goods (like automatic looms), but only on the condition that these were used to produce final goods like cars or clothes for export to other countries. It was illegal to use these imports to make goods for South Koreans to consume.

The authors build a Cass-Koopmans model of growth to explain South Korea's catch-up in GDP per capita in the post-war period (more specifically, they focus on value-added per worker in the manufacturing industry). Their model allows for trade between Korea and the G7 countries and features multistage protection of goods that allows the authors to study the tariff exemption policy.

South Korea climbs the GDP standings, 1955–2010
South Korea’s real GDP per capita grew at an average rate of 6.6 percent per year from 1961 to 1995. One of the poorest countries in the world after the Korean War, South Korea is now among the wealthiest.
Source: Penn World Table

The authors' intuition is that multistage production is key to the story. In general, the existence of trade increases the efficiency of the global economy because it allows different countries to specialize in areas of relative strength, rather than forcing each country to produce all of its own goods. Producing goods in multiple stages can create even greater opportunities for specialization – a firm in one country can get really good at manufacturing electronic components while a firm in another country devotes a huge factory to assembling televisions or phones from those components.

Constructing a good across multiple countries may entail some extra costs in shipping and tariffs, but often the efficiency gains of specialization dwarf those costs. Rising productivity makes the country a more attractive target for investment which in turn helps the economy grow even faster. The authors' hypothesis is that the tariff exemption designed to foster multistage production helped jumpstart economic growth in South Korea by increasing productivity. The authors are only considering the direct gains of improved specialization within a static technology setting, so they argue that their model will estimate a lower bound to the gains from these trade policy changes.

Once the model is constructed, the authors can plug various trade policies into the model and watch the effect on GDP unfold over time. They include the tariff exemption noted above as well as two others, broader tariff reductions in Korea and the G7 countries during the 1970s and '80s.

Ultimately, when the model is seeded with data about the Korean and G7 economies in 1963 and set in motion with these three actual trade policies, it can replicate about a sixth of Korea's growth in output per worker before 1963 and 1995. As expected, the tariff exemption for intermediate goods accounts for a large part of this effect. The model closely matches the observed increases in export volume and imports of investment goods. Given the assumption of static technology, the model is only able to explain 17% of the growth in Korean GDP per capita observed during this period.

[During this period] Korea implemented many other policies focused on physical and human capital, output, and trade. For example, government investment in schools, roads, and other infrastructure increased substantially. Credit subsidies and reduced direct and indirect tax rates were provided to exporters. Finally, Korea has had episodes of targeted industrial policy designed to build up particular industries, such as shipbuilding.

Does this mean that trade is actually an overrated part of the Korean growth miracle, and that other aspects of the Korean experience should receive most of the credit? Not necessarily. The authors emphasize that trade could have other positive effects not captured in the model, such as learning by exporting that increases productivity, or a widespread increase in schooling motivated by new job opportunities. The authors say their 17% figure is a lower bound for the true contribution of trade to growth during this period.

Even so, the policies highlighted here are not a foolproof plan for economic development. As tariff rates have come down globally, trade agreements are shifting in emphasis to protections for intellectual property and harmonization of regulations rather than reductions to tariff rates that are often near zero already. In this new environment, there is no guarantee that these same types of reforms would help today's poorest countries, even if the authors are confident that they helped boost consumption per capita in South Korea.

While this study can't provide a definitive assessment of trade policy's role in growth, it is one of only a few to model an actual historical growth episode and is able to describe a more nuanced relationship between trade and growth than the typical cross-country analysis can offer. The authors conclude with a call for future study of trade and growth using even more extensive models that can account for other developments like technological innovation, government support for specific industries, and the rise of labor unions. A new generation of such models will continue to illuminate the connection between trade and economic growth. ♦

"How Much of South Korea's Growth Miracle Can Be Explained by Trade Policy?" appears in the October 2015 issue of the American Economic Journal: Macroeconomics.