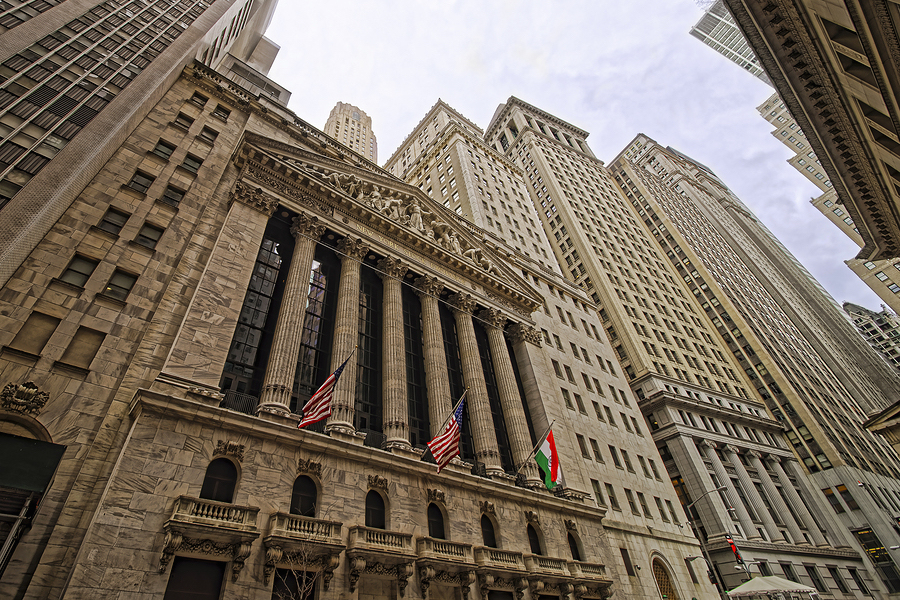 In recent months, the Minneapolis Fed has begun a series of meetings focused on ending Too Big to Fail, a shorthand term for the policy consensus that big banks had to be shored up during the 2008 financial crisis so that they didn’t take the entire U.S. economy down with them. The crisis woke people up to the fact that the economy was liable to seize up after the failure of even one major bank, giving the biggest banks a huge piece of leverage: they can make risky bets knowing that the government would have little choice but to bail them out if those bets turned sour.

One major thrust of post-crisis policy has been making the economy less beholden to big banks, but many economists feel there is more to be done. The most prominent proposal involves breaking up the biggest financial institutions so that none will be so crucial to the economy that it would force the government’s hand to bail it out in case of a failure. This idea has become a signature issue for Bernie Sanders, although there is an ongoing debate about whether that’s the right thing to do.

Even proposals to scale down the biggest banks would not change the fact that the larger economy still depends on a healthy banking sector. In a future crisis, where the financial system as a whole is on the brink of catastrophic failure, the government would probably be forced to step in – even in a world where no single bank was big enough to bring down the economy by itself. Research from this month’s issue of the American Economic Review makes the case that investors perceived the banking sector as “Too Systemic to Fail” during the crisis.

In Too-Systemic-to-Fail: What Option Markets Imply about Sector-Wide Government Guarantees (PDF), authors Bryan Kelly, Hanno Lustig, and Stijn Van Nieuwerburgh infer how investor attitudes were evolving on a daily basis during the financial crisis by looking at the recorded prices of certain options contracts. These contracts paid off if banks’ stock prices fell below a certain level by a certain date. Just like homeowners or car owners take out insurance policies to protect themselves in the case of catastrophic loss, people who own a lot of stock in banks can buy what are effectively insurance policies that pay out if bank stocks take a plunge.

Like more conventional types of insurance, the option purchase is a kind of bet that a bad thing will happen. Thus, the prices that people agree to trade on every day reveals something about how likely the disaster is in the minds of investors – in this case, the chance that the price of certain financial stocks would tumble within the next twelve months.

The authors look back at the prices recorded during the crisis in 2008 and 2009. In a typical stretch, bank stocks will not be highly correlated; some stocks will move up and some will move down depending on market conditions that advantage one bank or another. As the crisis deepened, bank stocks started moving more or less in unison as investors reacted to major news events like an announcement by a government official or a newly insolvent institution.

This increased correlation should have been a sign that the chance of a system-wide failure – an event that would lead to plunging stock prices across the board – was going up. This is turn should have led investors to buy more insurance against a freefall in the financial index, which should have pushed the basket-index put spread down. However, the put spread started rising during this period, contrary to the prediction of canonical models of asset pricing.

The authors conclude that investors seemed to think each individual bank’s stock price was at increased risk of a significant dropoff, but the risk of stock prices falling across the sector was not increasing as much. It is almost as if they assumed one bank’s failure would lead not to more failures, but to other banks improving their position.

The authors also notice that the put spread increased when developments in the news pointed toward more government intervention, like the announcement of a Fed program for banks called TALF in late November 2008. Other less sanguine announcements, like the October 14 decision that government funds would be spent on buying preferred stock in financial institutions rather than buying toxic assets at inflated prices, hurt the outlook for shareholders and made it seem like a government bailout might not be coming for them. The put spread declined in the weeks after that announcement.

The authors can mostly reconcile this puzzle if they add a bailout guarantee to their model. They imagine that the government assures investors that stock prices for the financial index won’t fall below a certain level. This would have the effect of decreasing demand for insurance, which could help make sense of the puzzling increases in the put spread during the darkest hours of the crisis. 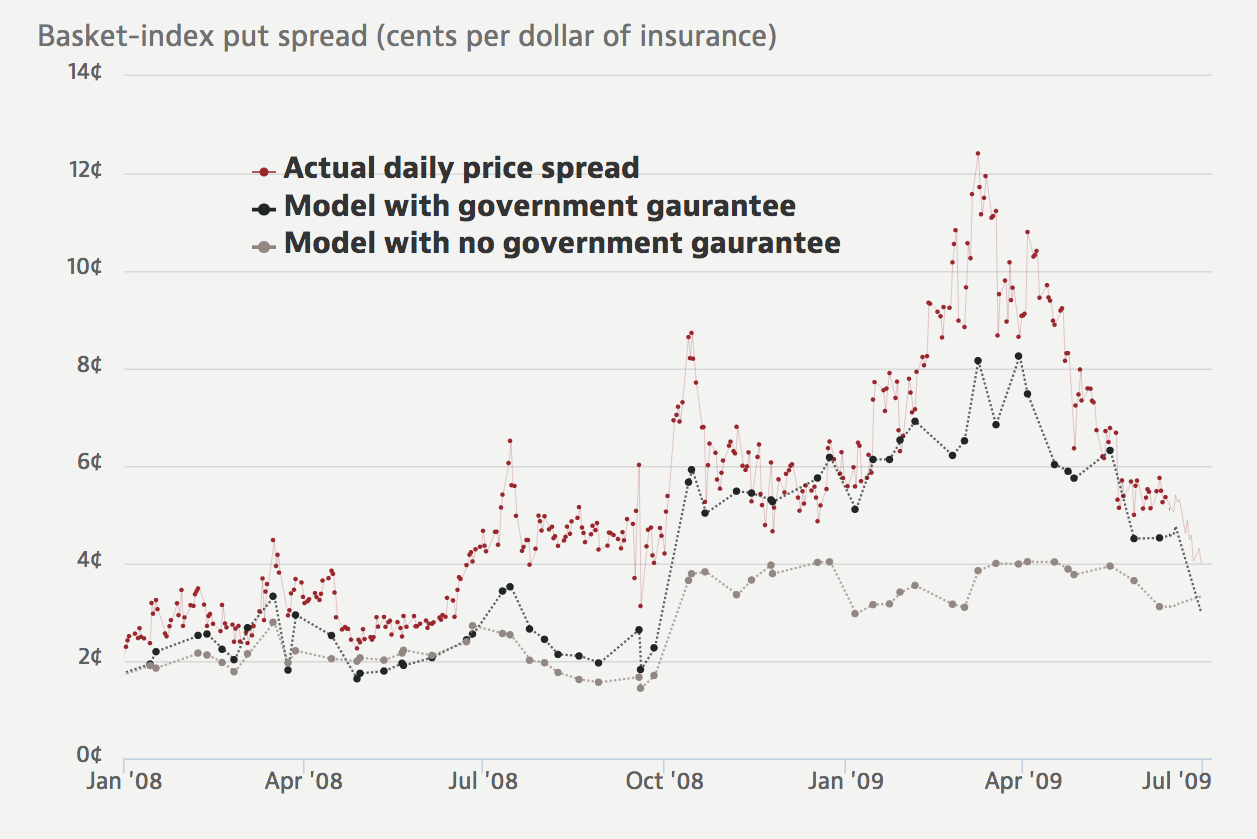 After modeling how this hypothetical guarantee would have affected prices, the authors run the numbers to see how aggressive the bailout would have to be to make sense of the data. They find that investors were acting as though the government had guaranteed the financial index would fall only 36% and any losses after that would be reimbursed. They estimate that shareholders collectively would have valued this guarantee at hundreds of billions of dollars if it had been available to trade on the open market.

The figure above shows this new model fits the data much better than the traditional model with no notion of a sector-wide bailout, especially the rocky period from October 2008 to the following February.

This isn’t the form an actual government guarantee would have taken of course: the government wouldn’t have just let all major U.S. banks fail and then sent consolation checks to investors who held certain options contracts. Instead, they would have acted to prevent the banks from collapsing in the first place, which would have propped up share prices for at least some banks, and depressed the price of insurance. Investors paid close attention to how the government acted toward banks during the crisis and made calculations about how aggressive it would be if stocks continued to tumble.

The authors note that this phenomenon complicates the usual interpretations of options prices as a measure of risk. If investors are taking implicit government guarantees into account when trading options (and the results of the study would suggest they do) then measures of risk based on options prices might be declining at a time when actual risk in the economy is higher than ever.

Additionally, the fact that bank shareholders perceived the actions of the government as helpful to them is interesting in itself. The government was ostensibly acting to help people to whom the banks owed money that wouldn’t be repaid if they failed rather than the owners of the banks who had gotten into trouble in the first place, but it seemed to benefit shareholders as well. This underscores the potential for unintended consequences of government guarantees, and will guide thinking about how to handle a financial sector that is too systemic to fail. ♦

“Too-Systemic-to-Fail: What Option Markets Imply about Sector-Wide Government Guarantees” appears in the June 2016 issue of the American Economic Review.