The perils of forward guidance when messages are open to interpretation 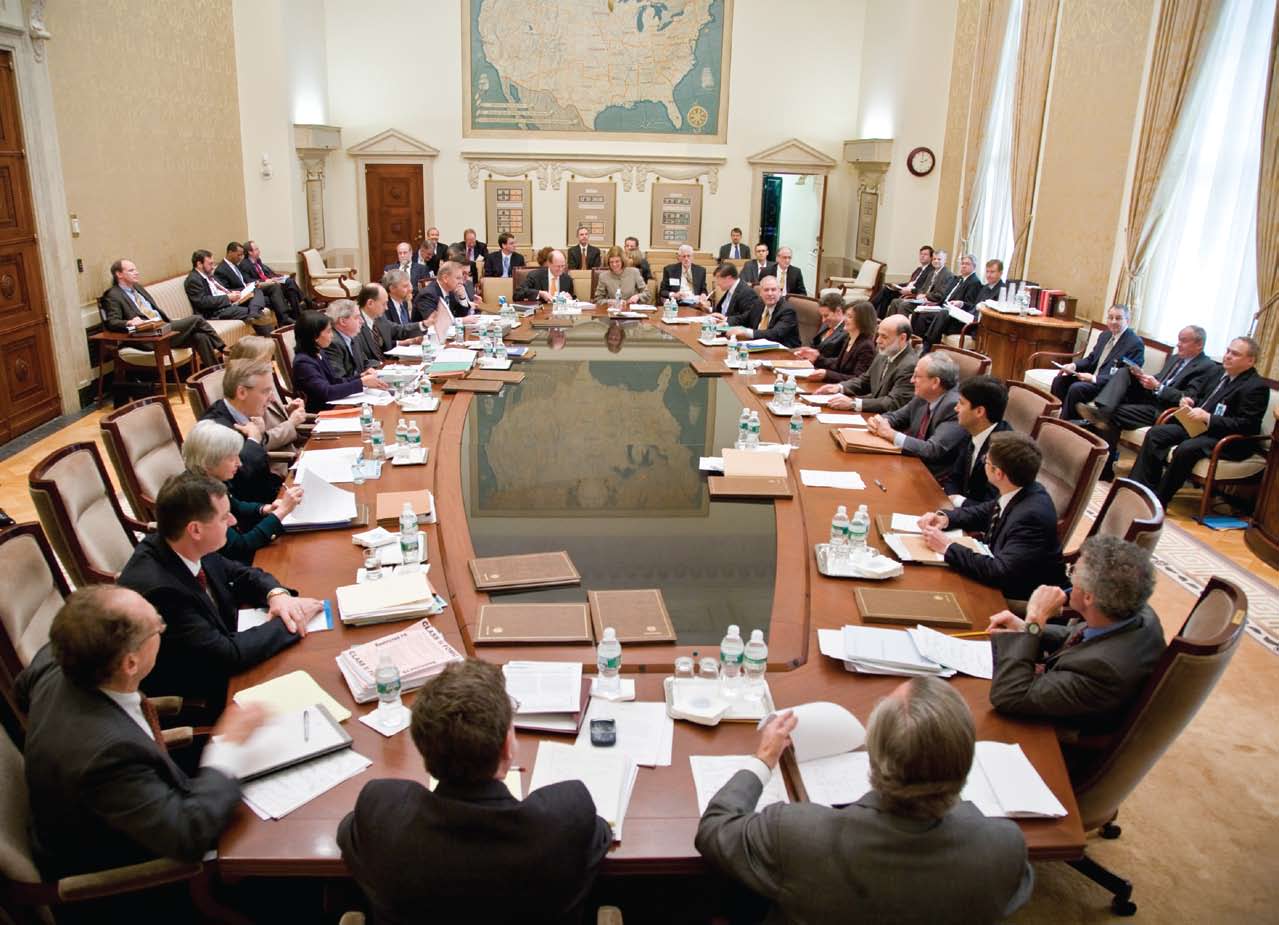 A meeting of the Federal Open Market Committee at the Eccles Federal Reserve Board Building in Washington, D.C.

Investors are fretting as the Federal Open Market Committee convenes tomorrow for the first time since its highly-anticipated interest rate hike in December. Equities markets around the world are down sharply in the new year on concerns about China's stalling economy and falling oil prices. Nevertheless, traders feel like they at least have a sense of where the Federal Reserve is heading next because of past statements by Fed Chair Janet Yellen and continual commentary from regional Fed Presidents.

It wasn't always this way. Opacity used to be considered a virtue at the world's big central banks. Historically the Fed would not even make any public pronouncements after deciding to change the federal funds rate. This left market observers to divine the thinking of legendarily inscrutable Fed Chair Alan Greenspan by, for instance, noting the size of the briefcase he carried to work.

It wasn't until 1994 when the Open Market Committee began releasing meeting statements detailing their decisions and their read on where the economy was going. Since then, the Fed has taken additional steps toward more transparency. In January 2012, it unveiled the first "dot plot" which offered anonymous, individualized predictions by committee members about the future course of interest rates. These days, public communication is considered a vital tool that the Fed uses to guide markets in the right direction.

But is more transparency always a good idea for central banks? Is the Fed's forward guidance always a steadying influence for markets, or can it rock the boat as well? An article appearing in this month's issue of the American Economic Journal: Macroeconomics examines the consequences for markets when the Fed's communications with the public are misunderstood.

In Rational Inattention to News: The Perils of Forward Guidance (PDF), author Gaetano Gaballo considers the conditions under which Fed communication can do harm by injecting confusion and disagreement into financial markets. He cites the example of the "Taper Tantrum" in spring and summer of 2013 – a period of unusual volatility for global markets that seems to have been touched off by comments made by Fed Chair Ben Bernanke during Congressional testimony on May 22 that year.

In his testimony, Bernanke surprised markets by indicating that the Fed would reduce bond purchases in the coming months if it continued to see improvement in the economy. The news roiled bond markets as traders first tried to parse Bernanke's statement – and then tried to process their fellow traders' reactions. The VIX or "fear index" rose in the days following the testimony, indicating that investors were anticipating larger swings in U.S. stock markets in coming weeks (see figure below).

How the ‘taper tantrum’ played out
A chart showing the evolution of the Chicago Board of Exchange Volatility Index (better known as the VIX or the ‘fear index’) in May and June of 2013. The VIX rose after Fed Chair Bernanke’s comments during his testimony on May 22 and his press conference on June 19, perhaps as a result of investor surprise and confusion. 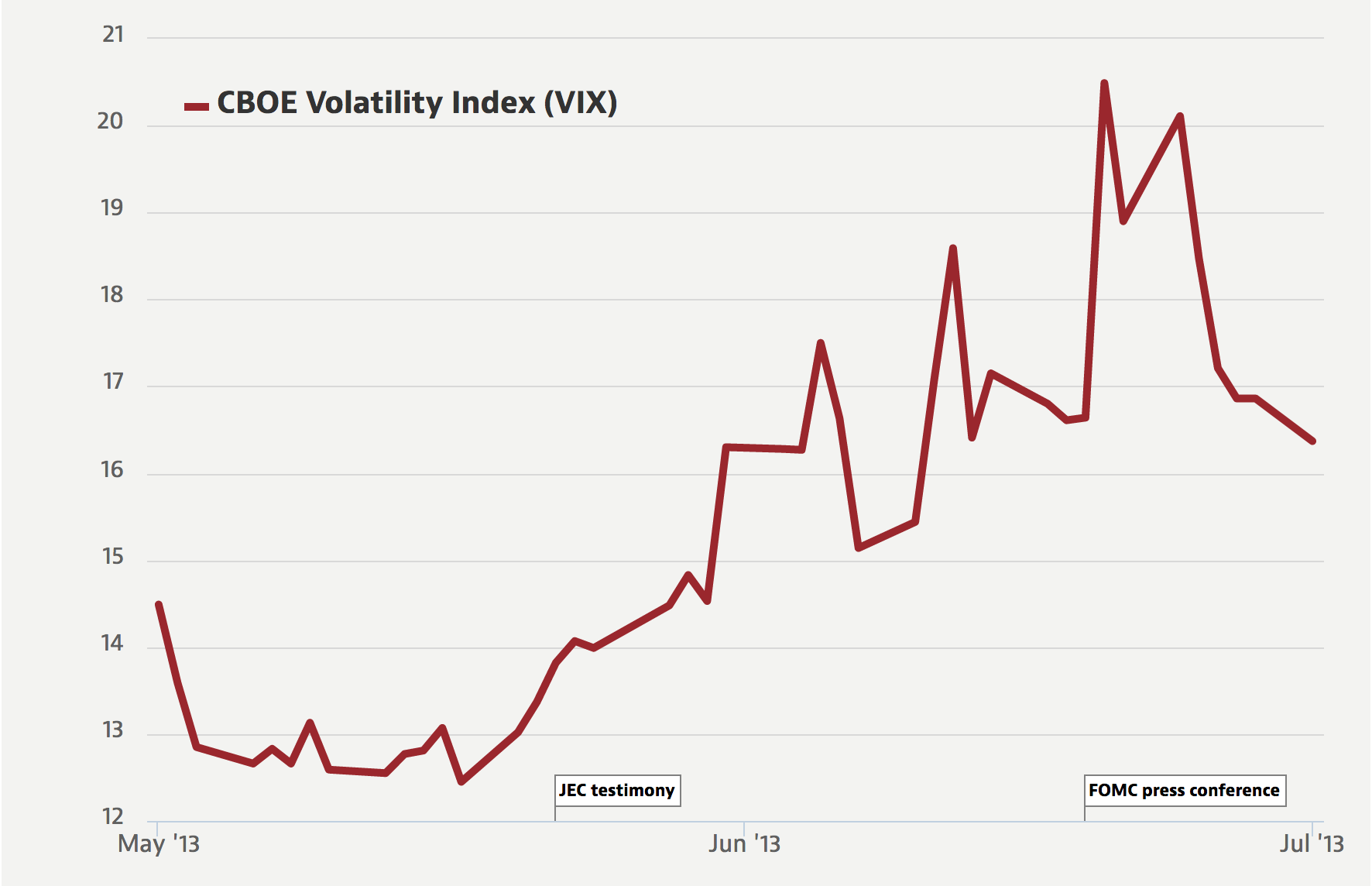 This volatility may have arisen because, as Gaballo puts it, there was "substantial disagreement about the actual informational content" of Bernanke's announcement. That day, online media coverage conveyed mixed messages: Forbes reported that "Fed could taper in next two meetings" while the AP's headline read "Bernanke: Too Soon to Consider Tapering Bond Buying." A clarifying statement during Bernanke's June 19 press conference only added fuel to the fire; the VIX continued to climb and stock markets gyrated over the subsequent months.

Gaballo develops a model borrowing tools from formal information theory to understand the ways that Fed communication can help or hinder markets. The model focuses on a market for a single bond whose price is changing over time. The model is much simpler than a real-world financial market with millions of different securities, yet it still captures the basic intuition that investors are better off when they are less uncertain about the future course of prices.

Gaballo assumes that the Fed can foresee price changes better than individual investors can, and will try to communicate this information to the public to help them make good decisions with their portfolios. But in reality the Fed's public announcements are rarely cut and dried – they often feature conditional statements that reflect the intrinsic complexity of their decision process.

In Gaballo's model, investors have a limited amount of attention to devote to all these pieces of information (along with all the other market signals they need to process every day), so the their perception of the announcement is subjective and imperfect. In other words, the investors are being "rationally inattentive" to some of the information they are receiving.

To model this inattentiveness, Gaballo assumes that when the Fed makes an announcement about the future course of the price of the bond, each investor hears the news with a bit of noise and each comes away with a different interpretation of what the Fed said. If the Fed predicts that the bond price will be $50 next month, some investors might hear that as $49, and some others as $51. It's as if when ten Wall Street traders tune in to watch the Chair's press conference, they are actually seeing ten slightly different versions of the same speech.

Once other investors begin trading bonds based on their own perceptions, a trader might notice that the price of the bond is doing something she does not expect. That trader will begin to wonder if she badly misinterpreted the Fed's message and will change her investing strategy accordingly, further scrambling investor perceptions and injecting yet more volatility into the price of the bond.

In Gaballo's analysis, the Fed's optimal strategy depends on what electrical engineers would call the "capacity" of the Fed's communication channel – a measure of the signal-to-noise ratio.

The analysis suggests that a policymaker, who aims at minimizing the loss of information, should not make announcements about future fundamentals when the news cannot be communicated without ambiguity. By contrast, when the communication leaves little room for subjective interpretation, the release has positive effects provided that appropriate policy is implemented.

If the capacity is low enough, Gaballo finds, the Fed is actually reducing investors' wellbeing by making an announcement, even though it really does have access to better information that would help guide the public's decisions if it could just interpret the message correctly. When the capacity is too low, extra volatility created by the statement more than cancels out the benefit of the Fed disseminating its superior forecast.

Overall, the analysis suggests that the Fed's move toward greater transparency, which has been broadly welcomed by investors, could have a downside. Because the Fed's announcements carry so much weight, and because the audience is being bombarded with so many signals already, forward guidance has the potential to roil markets if investors interpret that guidance in wildly different ways.

Gaballo points to the Taper Tantrum incident as a potential example of destructive Fed guidance, but right now we don't have much good empirical data about the amount of consensus in financial markets. Evidence of divergent investor attitudes after Fed announcements, for instance, might help make the case for a more tight-lipped policy, but more research is needed in this area before we can really assess how circumspect the Fed should be with its forward guidance. ♦

"Rational Inattention to News: The Perils of Forward Guidance" appears in the January 2016 issue of the American Economic Journal: Macroeconomics.