How much did foreign news broadcasts contribute to the Italian resistance in WWII? 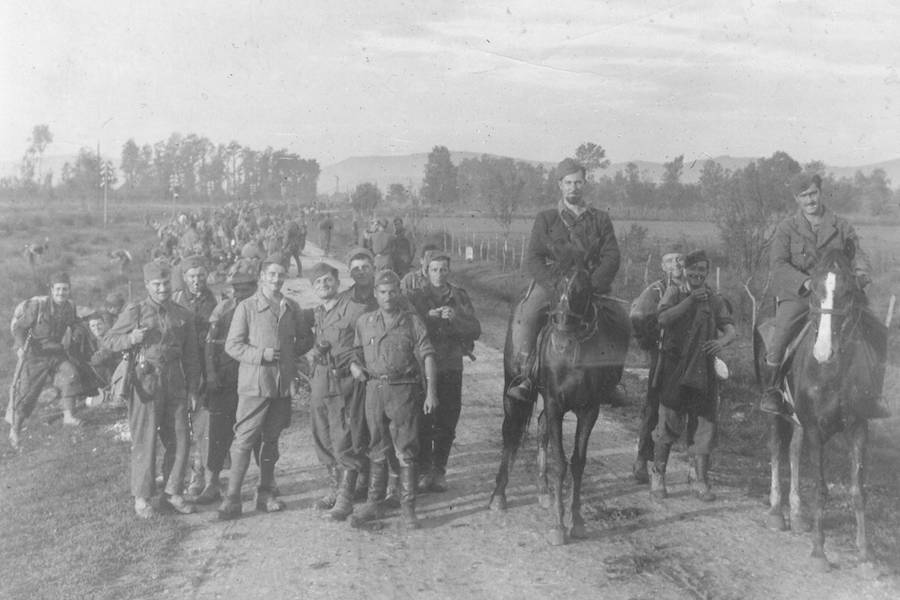 Italian partisans on the road to Belgrade in 1944.

Italy was in the grip of a Nazi occupation and overrun by fascists when, in the fall of 1943, groups of resistance fighters began to take their country back.

These partisan warriors were former soldiers who were cut off from their homes. Many still had their weapons, but another important tool in their insurgency was the radio, according to a paper in the October issue of the American Economic Journal: Applied Economics.

Authors Stefano Gagliarducci, Massimiliano Gaetano Onorato, Francesco Sobbrio, and Guido Tabellini analyze how foreign media helped resistance fighters in their insurgency against the Nazi-fascist regime. They say that BBC radio reports from the United Kingdom were a critical source of reliable information to citizen soldiers working to liberate Italy.

Understanding the impact of foreign news on domestic politics offers insights for modern conflicts, according to the authors.

“This question is now hotly debated in many countries,” Sobbrio told the AEA in an email interview. “By looking at the role of foreign media (i.e., the BBC radio) on the ‘civil war’ fought in Italy in the last years of WWII, our work speaks to this debate.”

In all, about 200,000 Italian partisans participated in the resistance. They were violently opposed by German and fascist forces, resulting in more than 75,000 Italian casualties. But they did have some success, including retaking Milan in April 1945 before the Allied troops arrived.

By looking at the role of foreign media (i.e., the BBC radio) on the ‘civil war’ fought in Italy in the last years of WWII, our work speaks to this debate.

The authors wondered about the role that radio reports from the BBC (known in Italy as Radio Londra) played in helping partisans coordinate their actions against the Nazi-fascists.

The authors developed a novel approach to distinguish the effects of BBC broadcasts from myriad other factors. Their method involved examining how sunspot activity—which is random and not at all affected by conflict on the ground—impacted the signal strength of BBC broadcasts, and then they matched that up with fighting in northern Italy.

BBC radio used a process called “sky-wave ionospheric propagation” so that its broadcast could reach Italy, roughly 800 miles away.

Broadcasters must somehow account for the earth’s curvature in order to transmit a signal to distant locations. So they send their signal up towards an atmospheric layer known as the ionosphere.

When a radio electromagnetic wave comes in contact with the atmospheric layers, its path is altered and the wave bounces back toward the ground.

However, this process—called “ionospheric propagation”—and the resulting signal strength are affected by seasonal variations in daylight and also by sunspots.

The authors collected historical data on sunspots from the Royal Observatory of Belgium, matched it up with BBC transmitter data, and used it to calculate the radio signal strength to various Italian towns. They then compared it to Nazi-fascist attacks on civilians and partisans recorded in the “Atlas of Nazi-fascist Massacres.”

They concluded that a one standard deviation increase in the strength of the BBC signal increased the number of episodes of Nazi-fascist violence by almost three times, relative to the monthly average.

There could be two reasons why BBC broadcasts fed the uprising. The broadcaster not only reported news bulletins about the war, and counter-propaganda criticizing the fascist regime, but also had coded “special messages” that conveyed logistic and military information to resistance fighters.

The authors conclude that it is more likely the latter. While there is evidence that the BBC played a role in coordinating resistance activities against the foreign occupation, it probably had a minor impact in mobilizing the civilians against the fascist regime.

It was the tactical information that allowed already mobilized fighters to strategize. The BBC provided information about movement of enemy troops and incoming airdrops of weapons and supplies and let the resistance fighters know that their efforts were important.

The research highlights the importance of media in times of unrest, which holds as true today as it did 80 years ago.

“Clearly, our main contribution is to provide evidence on the role of BBC radio during WWII in Italy,” Sobbrio said. “At the same time, by emphasizing the role of the media in facilitating forms of direct foreign intervention during war episodes, we speak to an important aspect of modern conflicts that has received little attention in the literature.”

“War of the Waves: Radio and Resistance during World War II” appears in the October issue of the American Economic Journal: Applied Economics.