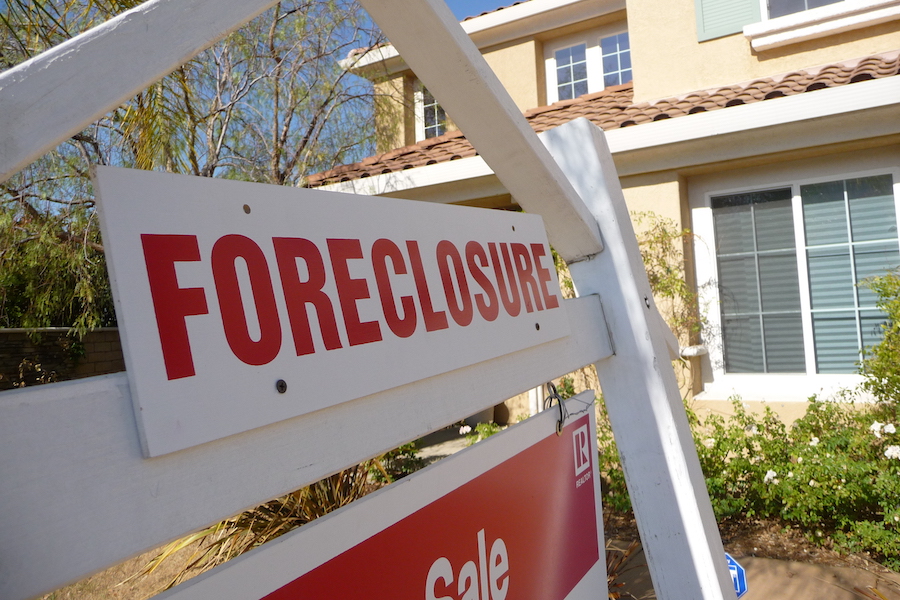 This home foreclosure was one of millions during the Great Recession.

Ten years ago, millions of Americans were losing their homes to foreclosure and policymakers didn’t know how to help them.

Part of the problem was that lawmakers didn’t understand why homeowners were unable — or unwilling — to repay their mortgages.

Was it more tied to rising unemployment or the massive losses in the housing market? Were homeowners not paying their mortgages because a breadwinner had lost their job or were they just so underwater that they were making a rational choice to walk away from an investment they knew they would never recoup?

A paper that appears in the January issue of the American Economic Review suggests that job loss played a larger role in the problem than previously thought.

Perhaps it’s not surprising that giving financial assistance to laid-off workers would help them afford to keep making mortgage payments, Melzer said in an interview with the AEA. But nobody realized how big of an impact unemployment insurance could have on stabilizing the housing market. It was also unclear whether homeowners who were severely underwater would keep putting the money into a losing investment when they had a strategic incentive to default.

(W)hen many homeowners were in a negative equity position, it was exactly at that time that this program that replaced income was having really big effects.

“Those are the times when we worry replacing income would be ineffective,” Melzer said. “That’s what is striking about our finding — when many homeowners were in a negative equity position, it was exactly at that time that this program that replaced income was having really big effects.”

Unemployment insurance is the third-largest government program to support the needy, behind Social Security and government-sponsored health care. But it sometimes gets criticized for reducing people’s motivation to work. Research by Lawrence Katz and Bruce Meyer suggests the longer that laid-off workers receive benefits, the longer they remain unemployed.

However, there are other social benefits from unemployment insurance, such as helping laid-off workers to keep spending on groceries, gas, and other goods that feed the economy. Also, in the midst of a catastrophic financial crisis rooted in a wave of souring mortgages, unemployment benefits could even help stabilize the $30 trillion US housing market.

Unemployment insurance benefits are administered at the state level, and not all states are equally generous. There is wide variation in the maximum amount of cash and duration of time that states offer to laid-off workers. Melzer and his co-authors wondered whether more generous states would see an impact on foreclosure rates?

They did. Examining housing and labor data from 1991 to 2010, the authors estimate that a $3,600 increase in a state’s maximum regular UI benefits prevents 13 percent of the average layoff-related rise in delinquency.

Extended benefits
There is wide variation in the benefits states give to unemployed workers. The chart below shows the maximum regular payments states offered in 2010. Hover over each state to see how it compares to what they offered in 1991 (adjusted for inflation), as well as how much they provided under a federal expansion of unemployment benefits during the Great Recession. The extended benefits, which are in addition to the regular benefits, are in 2009 dollars.
Source: author calculations

The authors also looked at what happened when the federal government stepped in and offered to fully fund two initiatives — the Extended Benefits (EB) and Emergency Unemployment Compensation (EUC) programs — aimed at extending the number of weeks laid-off workers could receive benefits at a time when the national unemployment rate topped 10 percent.

Not every state chose to expand benefits to the same degree, and exploiting this variation, the authors found a similar effect: An additional $3,600 in maximum benefits prevented nearly 15 percent of the layoff-related increase in foreclosures.

“It’s a really natural and sensible mechanism that income replacement can help prevent loan default,” he said. “What was surprising was how large of an impact that can have.”

The UI benefits also likely prevented larger losses in home values stemming from derelict properties. People who live in a house are more likely to keep up with basic maintenance — yard work, plumbing, cleaning — than homeowners who have walked away. That has spillover effects for the entire neighborhood, stabilizing home values even when the owners have not lost their jobs.

To be clear, the Great Recession was extreme in both the jobs lost and the damage wrought on the housing market. So, it’s unlikely that extensions of unemployment insurance would have a similarly large impact during a more modest downturn, Melzer said.

Still, this research should give policymakers food for thought about the ancillary benefits from unemployment programs.

“Unemployment Insurance as a Housing Market Stabilizer” appears in the January issue of the American Economic Review.