The puzzling decline in employment for prime-age men

The Great Recession has technically been over for seven years this month, yet in many parts of the country it feels like the recession is dragging on. Fewer new establishments opening their doors and some laid off workers giving up hope of ever finding another job they are willing to take.

A big part of this story is the decline in employment rates for men in their prime who used to be almost universally employed in earlier decades – 50 years ago, only about 5% of men aged 25-54 in the U.S. were without gainfully employment. But prime age men, especially ones without college degrees, were hit hard during the recession and employment levels for this group are at historic lows with only minimal recovery in the years since the recession ended.

The persistent unemployment of this demographic has sparked an ongoing debate about why noncollege men have apparently exited the labor force in such large numbers – and whether they will ever come back.

Is it due to cyclical factors having to do with the recession itself – like policy uncertainty or shortfalls in aggregate demand and business investment? It’s possible, but with each passing year after the recession where noncollege male employment continues to lag behind that of other groups, the cyclical explanation becomes less and less convincing.

This gives greater weight to an opposing view: noncollege men are being immiserated by long-term trends like task automation and import competition from low-cost manufacturing countries. But if these long term trends are really to blame, why did employment collapse so sharply during the Great Recession, rather than gradually over many years?

In a paper appearing in last month’s issue of the Journal of Economic Perspectives, three economists argue that the housing bubble of the 2000s was disguising a slow but deep decline in manufacturing jobs that was only fully revealed when the bubble burst.

In The Masking of the Decline in Manufacturing Employment by the Housing Bubble (PDF), authors Kerwin Kofi Charles, Erik Hurst, and Matthew Notowidigdo say that this coincidental timing – a surge in new construction jobs starting in the late 1990s around the same time that manufacturing employment started to slide – has muddied the picture for economists who are trying to interpret the evidence and address persistent unemployment among men without college degrees.

The reasons for this shift are still being investigated by economists – recent research points to increasing trade with China as an important factor – but the important point for the authors’ argument is that it coincided almost exactly with a runup in housing prices starting in the late 1990s. The resulting frenzy of new home construction, renovations, and refinancing created new opportunities in many different sectors. It particularly boosted the construction sector, which expanded by millions of new jobs during this period.

There is no particular reason why these two developments happened at the same time, but they did. In the authors’ telling, the housing boom looked like a godsend for the workforce being laid off from jobs in manufacturing, a workforce disproportionately made up of men with high school educations who were ill-positioned to find jobs in other growing sectors like health care or finance.

These former factory workers began flowing into construction jobs, and employment for this group didn’t drop off significantly even as U.S. manufacturing sector was shedding hundreds of thousands of jobs a year. But when the housing bubble burst, they were left with nowhere to turn and employment dropped precipitously.

This story holds up in aggregate data on employment in each sector, but what if there’s something more complicated going on that could explain the stark employment drop in 2007 and 2008? To test their theory, the authors look to local data from 275 metropolitan statistical areas as defined by the U.S. Census Bureau. They collect evidence on manufacturing layoffs, house prices, and new house permits in each metro area to see how much each individual part of the country was affected by the manufacturing bust and the housing boom.

The authors isolate 57 metro areas where the housing boom was most intense, and compare those to the rest of the country where the housing boom was less of a factor, but where the manufacturing decline tended to be a bigger deal. Focusing on employment for prime-age noncollege males, the authors calculate an expected employment level for this group based on how many local manufacturing jobs were lost between 2000 and 2006. They calculate expected values for two years: 2006 (the height of the boom) and 2012 (well after the housing bubble burst).

Manufacturing layoffs stung less in cities where housing boomed
Comparison of employment levels for non-college men in 2006 and 2012 across 275 U.S. metropolitan areas. Employment is calculated relative to what would be expected based on the extent of local manufacturing job losses during the early 2000s. Non-college men in metros with major housing booms tended to be doing much better than expected in 2006 at the peak of the boom, but not particularly well relative to those in other metro areas after the bubble burst. 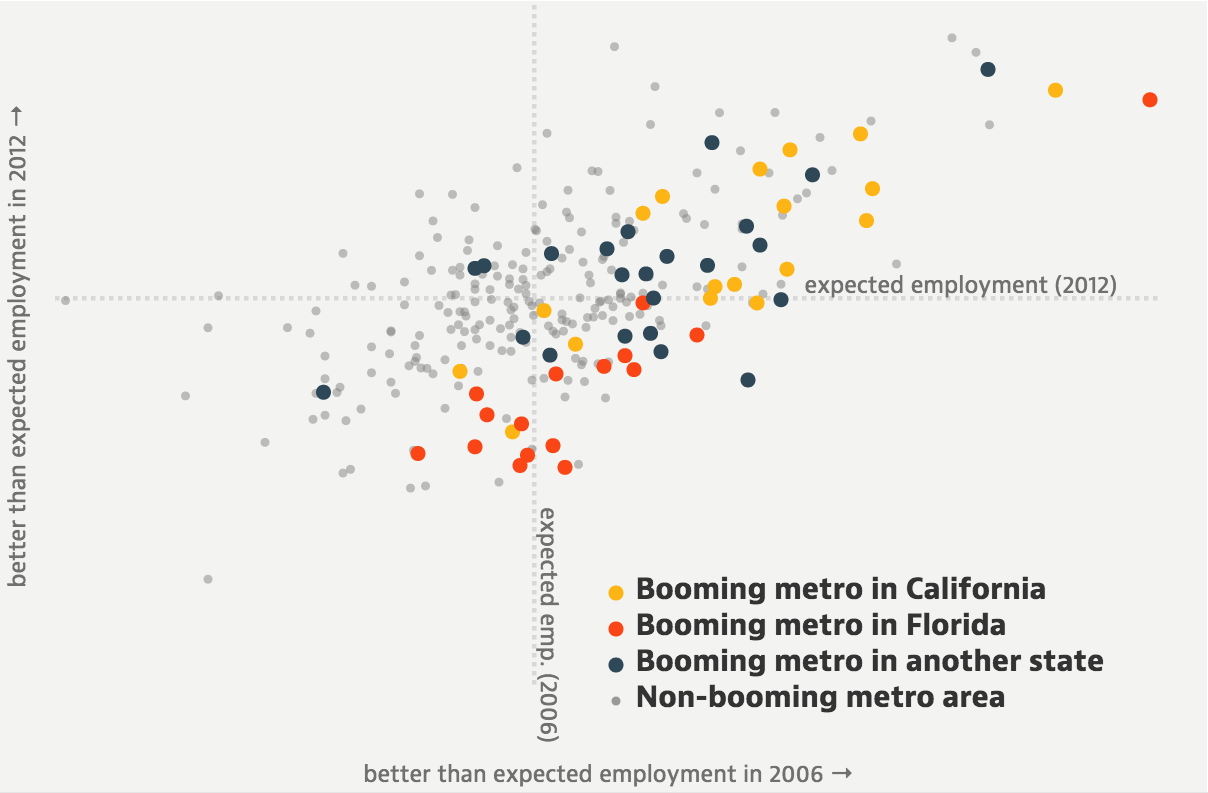 The authors find that in 2006 when housing prices nationwide were at their peak, cities with major housing booms don’t look much like other cities. Noncollege men in these booming cities were doing better than expected given local manufacturing losses (most of the booming metros are to the right of the vertical dotted line in the figure).

These cities were doing well, but perhaps that was because their local economies were doing something different that was helping noncollege men find employment in all sorts of new sectors, not just construction. Or perhaps the housing boom was just temporarily helping them defy economic gravity, while other cities without booms were feeling the full brunt of manufacturing layoffs and were getting a preview of the recession.

The authors then look at the same set of metro areas in 2012, six years after the housing bubble began to burst and a couple years into the post-recession recovery. They again compare employment levels for noncollege prime-age males to expectations. The cities that boomed the most during the 2000s no longer look so charmed.

About half are above and below the dotted horizontal line suggesting that noncollege males were no longer doing any better than in nonbooming cities. It seems these cities didn’t actually have a magic formula for transitioning noncollege workers to an post industrial information-based economy. Once the housing market collapsed and construction jobs dried up, noncollege men in these cities were in the same boat as their counterparts in cities that didn’t boom.

The housing boom mostly disappeared without leaving a trace on these labor markets. This suggests that the housing boom was just a temporary effect that masked an important underlying development. If the housing boom had somehow never occurred, the disappearance of manufacturing jobs would have been a lot more apparent and could have been the economic story of the decade. This might have dramatically changed the terms of the debate about what to do now to get noncollege men back to work. ♦

“The Masking of the Decline in Manufacturing Employment by the Housing Bubble” appears in the Spring 2016 issue of the Journal of Economic Perspectives.