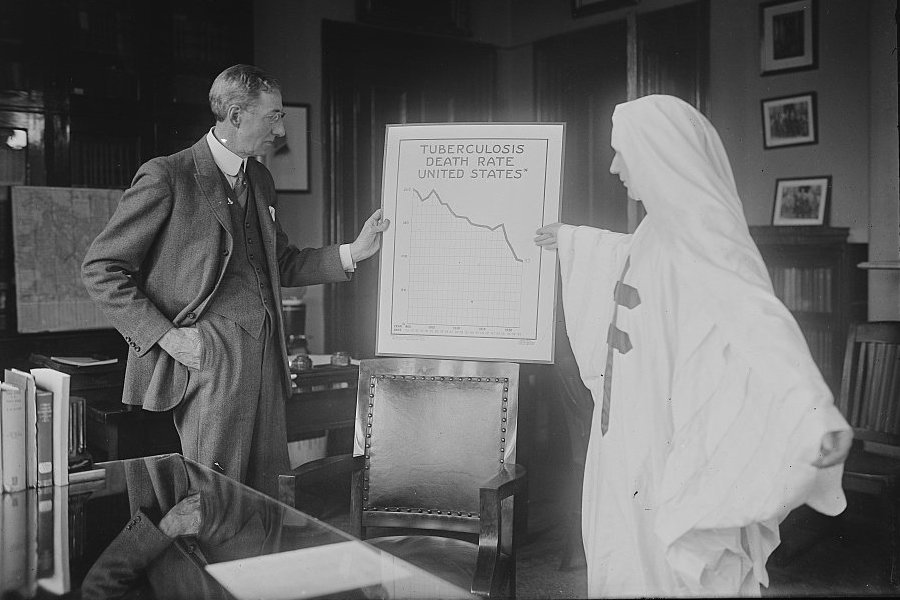 Tuberculosis was a scourge at the turn of the 20th century that killed 194 out of every 100,000 Americans per year.

Then, suddenly, it wasn’t.

Within a decade or two, TB—a bacterial infection that affects mainly the lungs—was well on its way to being contained, with death rates dropping more than 40 percent by 1920 and 63 percent by 1930.

The improvements seemed to be a testament to public health efforts that had sprung up across the United States. Cities and states across the country banned spitting in public and the use of common drinking cups, built sanatoriums and TB hospitals that isolated patients from the general population, and launched education initiatives.

We were too quick to say [the reason for the decline] is public health. The evidence is much weaker than it was portrayed as being.

A paper in the April issue of the American Economic Journal: Applied Economics questions the prevailing wisdom that these public health initiatives actually worked.

“We were too quick to say [the reason for the decline] is public health,” Rees said in an interview with the AEA. “The evidence is much weaker than it was portrayed as being.”

Despite progress to eradicate it in the developing world, tuberculosis remains one of the world’s deadliest infectious diseases, claiming the lives of nearly 4,500 people every day and causing 30,000 more people to fall ill, according to the World Health Organization. It is particularly deadly for children and people infected with HIV. Thus, it is critical to understand the extent to which anti-TB initiatives have driven rates lower in order to target resources toward effective interventions.

Global Tuberculosis Rates
A bacterial infection that affects mainly the lungs, TB remains one of the world's deadliest infectious diseases. The chart below shows every country's rate of infection per 100,000 people.
Source: World Health Organization (2018)

More broadly, Rees says this paper raises questions about how we fundamentally understand the “mortality transition” in the US at the turn of the century, when there were large drops in deaths from influenza and other common diseases.

The authors drew on newly transcribed historical data from more than 500 municipalities published in Mortality Statistics, an annual publication by the US Census Bureau. They examined differences between cities and states in the initiatives they implemented to combat tuberculosis. Would places with large sanatoriums or open-air TB camps have more or less success than regions that didn’t? What about those that implemented spitting bans or built medication dispensaries?

They found little effect of the anti-TB initiatives on declines in disease rates. The only exceptions were reporting active cases to local health officials and establishing state-run sanatoriums, both of which led to modest drops in pulmonary TB mortality.

Still, those effects were not nearly large enough to explain why TB deaths plummeted at the beginning of the 20th century. It was a surprising result that left the authors perplexed about how to proceed, Rees said. There’s a tendency among many researchers to assume that only “statistically significant estimates” are worthwhile to publish. But, after talking it over with colleagues and the AEJ editors, the authors were convinced that these “null” results were actually more interesting. The findings undercut long-held assumptions about the effectiveness of anti-TB interventions and raised larger questions about the actual drivers of the mortality transition.

“The broader question is what caused the decline in influenza mortality. Influenza was the leading cause of death in 1900. Same with diarrheal diseases,” Rees said. “It’s such a basic question, and I’m convincing myself that we don’t know the answer.”

“Was the First Public Health Campaign Successful” appears in the April issue of the American Economic Journal: Applied Economics.

The AEA interviews Emily Lawler about vaccination mandates and their spillover effects.