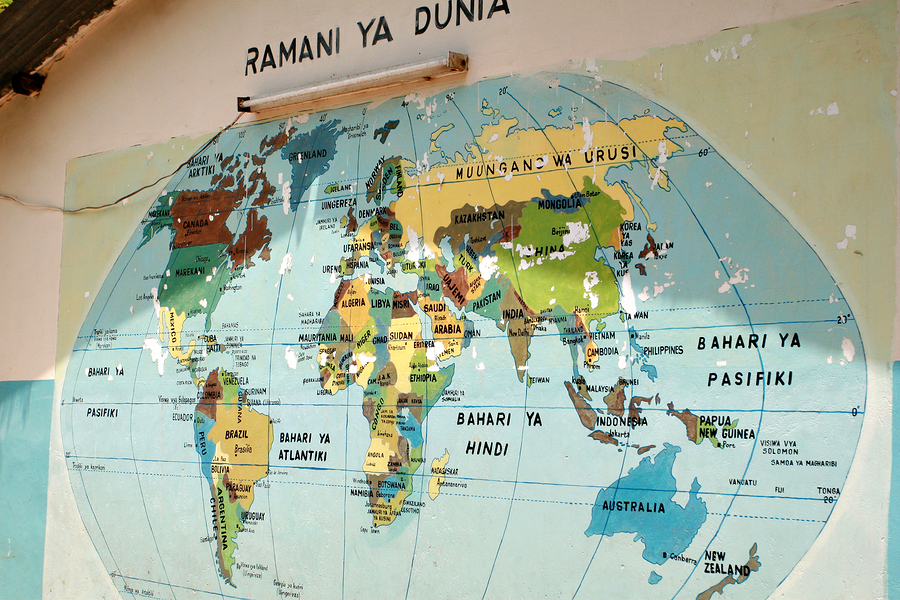 After several promising years of declines, political violence rose in Africa in 2015 with escalating violence in Burundi, Niger, and Mali, and ongoing civil war in the Central African Republic.

Observers have blamed trends like a rising tide of jihadism and incursions by Islamic State militants, but African scholars have long maintained that the national borders in Africa, most of which date back to the period in the late 1800s when European powers divided up most of the continent in a flurry of diplomatic agreements and colonial wars now known as the “Scramble for Africa,” are actually one of the biggest sources of its present-day strife and violence.

These borders were not drawn with much attention or sympathy to the people already living on the continent -- most of the European diplomats negotiating new territorial borders had little or no knowledge of the terrain or populations they were apportioning. In 1890, the British Prime Minister noted that “we have been giving away mountains and rivers and lakes to each other, only hindered by the small impediment that we never knew exactly where the mountains and rivers and lakes were.”

By the time World War I began, the continent was crisscrossed with novel political borders that had little significance to the people on the ground. Most African colonies gained independence as new nations during the 1950s and 1960s, and in many cases inherited the borders that had been haphazardly drawn decades before. That left many ethnic groups divided across borders, sparking strife and civil wars, and leaving the continent with dozens of separatist movements even today.

Did the arbitrary colonial divisions divined in the 19th century set the newly independent African nations on a path to turmoil? A study appearing in the current issue of the American Economic Review uses a newly compiled dataset on political violence on the continent to test that theory.

In The Long-Run Effects of the Scramble for Africa (PDF), authors Stelios Michalopoulos and Elias Papaioannou aim to determine whether traditional ethnic homelands that are now partitioned by national borders see more violence than ethnic areas that avoided being split during the colonial era and are still wholly contained in a single contemporary African state.

To identify the pre-colonial boundaries of each ethnic group, the authors use a 1959 ethnolinguistic map created by American anthropologist George Peter Murdock that was constructed using primary sources from the latter half of the 19th century and the early 20th century. It reflects a tremendous linguistic and ethnic diversity that is belied by a modern political map of the continent -- no fewer than 825 different ethnic groups are identified on Murdock’s map.

During the “Scramble for Africa,” that starts with the Berlin Conference of 1884–1885 and is completed by the turn of the twentieth century, Europeans partitioned Africa into spheres of influence, protectorates, and colonies. The borders were designed in European capitals at a time when Europeans had barely settled in Africa and had limited knowledge of local conditions. Despite their arbitrariness, these boundaries outlived the colonial era.

The authors then superimpose the present-day borders on the pre-colonial map to determine which ethnic homelands were divided during the Scramble for Africa by the European powers. They find that 28% of all groups identified by Murdock saw their ancestral homelands split across different countries.

Are these regions -- homelands divided by a political and diplomatic process set in motion over a hundred years ago -- more prone to violence in the twenty first century?

The authors look to the Armed Conflict Location and Event Dataset (ACLED), which includes clashes between organized, armed groups as well as myriad forms of violence against civilians, such as paramilitary violence, raids, and abductions. The data include more than 64,000 georeferenced incidents between 1997 and 2013, including estimates of casualties and fatalities, so the authors can track the breadth and intensity of civil conflict over time in each ethnic homeland, and how the form of violence varies from place to place.

After controlling for geographic factors like susceptibility to malaria, local deposits of diamonds or oil, and proximity to the coast and to the national capital, they find that partitioned homelands do indeed suffer from more political violence, seeing about 57% more such incidents than non-partitioned homelands. The estimated magnitude is similar to the effect of having petroleum deposits within the region, a notorious source of conflict in post-colonial Africa. The analysis also reveals that merely being located near a split homeland -- even in homelands that are not themselves divided -- leads to more violence and more deadly incidents.

There is also evidence that these divided homelands are more likely to see an incursion from a military force or militia across the border -- supporting the hypothesis that national governments can use co-ethnic groups across the border as a cudgel against neighboring countries.

Present-day borders in Africa split many ethnic homelands
The map of African ethnolinguistic divisions created by American anthropologist George Peter Murdock in 1959, overlaid with a map of present-day national borders. The Murdock map is based on primary sources and is meant to represent the location of ethnic homelands during the period from 1890–1910. The authors identify 28% of Murdock's 843 regions that are significantly partitioned by present-day borders.
Source: adapted from Figure 1 of Michalopoulos & Papaioannou (2016)

Other data on ethnic group discrimination and individual well-being show that people identifying with divided ethnicities have to worry about more than just violence. They are more likely to face formal discrimination from the central government, such as the San people (also known as the Bushmen) in Botswana who have faced forced resettlement or the isolated Karamojong people in Uganda who have been subject to raids and land confiscation. Moreover, individuals belonging to split groups also tend to have worse access to public goods and lower standards of living.

The question is whether the mostly European-drawn borders are really to blame for these stark outcomes. Was the process of drawing colonial borders in Africa truly as haphazard as the historical record suggests? If certain favored ethnic groups or areas rich with natural resources were less likely to be divided while less desirable areas were more likely to be split between colonial powers, the patterns identified above wouldn’t necessarily be evidence that partitioning per se is bad for an ethnic group.

The authors compare the partitioned and non-partitioned homelands on several dimensions to see if there are any patterns that might explain the tendency toward violence in partitioned areas. They find that the two groups are statistically indistinguishable on almost every count, ranging from elevation to agricultural potential to the presence of underground oil reserves (which wouldn’t have been known when most of these borders were drawn) to pre-colonial ethnic-specific. The only significant difference between the two groups is size: larger homelands were more likely to be partitioned.

This balance across so many variables suggests that in 1880, before most colonial borders were drawn, it wouldn’t have been easy to predict that one group of ethnic territories would end up faring so much better than the other.

Of course, this does not prove that every single African border was drawn at random, but it does indicate that the two groups are extremely comparable, and it does not reveal any obvious root cause for the discrepancy in latter-day political violence save for the borders themselves. This suggests that some parts of the continent are still feeling the ill effects of the Scramble for Africa. ♦

“The Long-Run Effects of the Scramble for Africa” appears in the July 2016 issue of the American Economic Review.