To what extent can technological disruption lead to civil unrest? 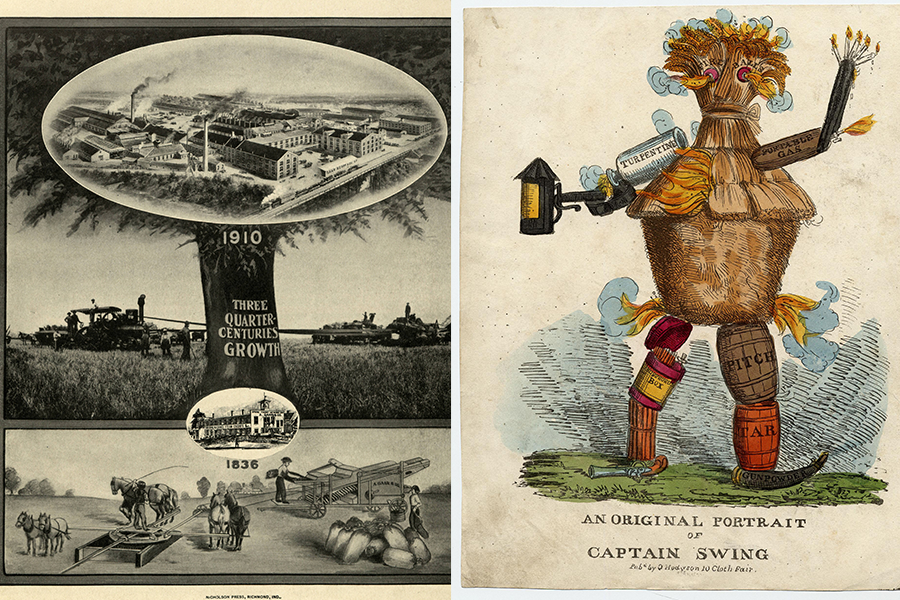 The violence began in late summer 1830 and lasted until the following year.

England’s rural peasants had enough of “threshing” machines,” which mechanized the separation of grain from husk and, in replacing manual labor, denied farm workers an important source of income. It would lead to the largest wave of unrest in English history.

But, like so many other upheavals, the “Captain Swing” riots were more complicated than that. It was never just resistance to technology.

“It’s a little bit like how you get a wildfire,” said Hans-Joachim Voth, whose paper about the riots appears in the September American Economic Review: Insights. “The forest has to be dry... Someone's always going to throw a match, but the question is why is the forest dry at that point?”

Mining 19th century advertisements, news accounts, and agricultural surveys, Voth and co-author Bruno Caprettini assembled a historical dataset to examine just how much labor-saving technology contributed to the severity of the riots. Though the event happened nearly two centuries ago, the research offers important insights into the factors that drive social unrest when workers are displaced by innovation.

It’s a little bit like how you get a wildfire. The forest has to be dry... Someone's always going to throw a match, but the question is why is the forest dry at that point?

Economists have long argued about the upside of labor-saving technologies. Some workers will suffer pain, the argument goes, but ultimately they will benefit from a more productive economy. And while recent research has examined the negative impacts of technical change on labor and wages, there hasn’t been much evidence about the social costs that accompany massive job loss, Voth said.

Loosening grains from husks provided a key source of income for rural laborers, accounting for up to half their winter earnings prior to mechanization. The introduction of threshing machines in 1786 would change that. Although inefficient at first, they would improve over the ensuing decades and, by 1830, lead to massive labor displacement. The machines were a key target during the riots, which included more than 3,000 cases of arson, looting, attacks on authorities, and machine-breaking across 45 counties.

But it wasn’t the technology alone that fed the flames of discontent.

Bad weather, a poor harvest, and news of revolutions in France and Belgium contributed to the Swing riots (so-named for the fictitious “Captain Swing,” the name appended to threatening letters that protesting workers sent to authorities). And the consolidation of lands into larger farms via “enclosure” had taken away their access to the commons and created a “landless proletarian.”

The authors wondered about the extent to which the technology itself drove discontent.

Swing Riots
The hotspots during the 1830 Captain Swing riots generally corresponded with the areas where adoption of threshing machines was greatest. 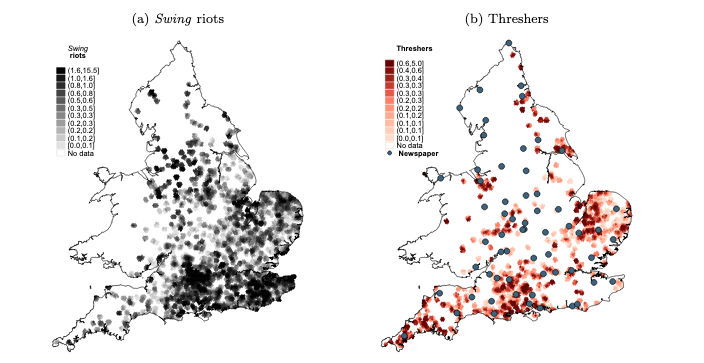 Voth and Caprettini examined newspaper advertisements with mentions of threshers and agricultural surveys to identify areas that were most affected by the technological change. They also identified those regions by their soil composition, focusing on those most suitable to growing wheat, the grain that was most affected by the threshing machines.

Linking that with data on looting, arson, and other violent incidents, the authors found that threshers were a key factor behind the revolt. In parishes most affected by threshers, the probability of riot was 26.1 percent, twice as high as in places without threshers.

Other factors intensified the rioting. Enclosure of common land appeared to exacerbate the effects. Also, rural areas without access to other job opportunities experienced the worst violence.

“If you’re quite close to one of the rapidly growing urban centers with ample labor demand, it’s not so bad,” Voth said.

Indeed, not all technological innovation will result in violent revolt. More than 90 percent of jobs have been lost since the industrial revolution. Most of these losses affect a few percent of the workforce—like the replacement of telephone operators with self-dial phones.

But the displacement leading up to the Swing riots was different. Threshing kept a large part of the agricultural workforce busy for months; mechanical threshers therefore cut much deeper into peoples’ livelihoods. Without a robust welfare system to support affected workers, tensions were bound to erupt.

One implication is that redistribution matters, Voth said. Whether the jobs lost were due to 19th century threshers or 21st century robots, policymakers must consider how to support the people who are most affected. Otherwise, political and social unrest becomes much more likely, perhaps inevitable.

“The more technological change we get, along with the list of jobs destroyed, the more important [it is that] we have welfare systems that make it possible to do this welfare-enhancing deal in society,” Voth said. “Let the technology adopted make us more productive, but make sure that people don't lose out too much.”

"Rage Against the Machines: Labor-Saving Technology and Unrest in Industrializing England" appears in the September issue of the American Economic Review: Insights.

Explaining the decline of US manufacturing

The world's second largest economy has become a global leader in its adoption of robotic technology.