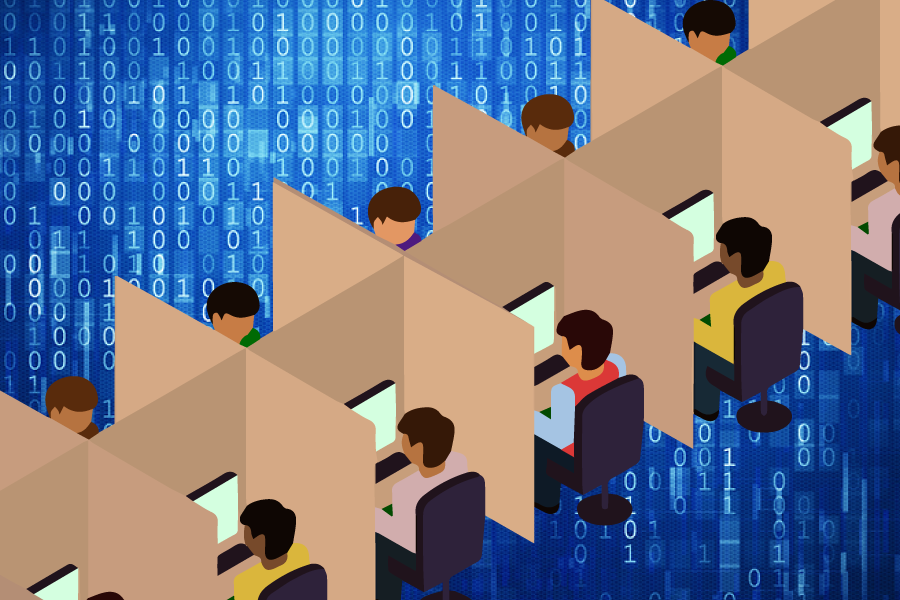 In 1989, operations researchers at credit card giant GE Capital approached debt collections managers with a challenge. Could they recover more money from delinquent accounts than a computer could?

For years, debt collections at the company had operated on a basic strategy of escalation. Credit card clients who hadn’t paid their bills for a certain number of months got recorded voice messages of increasing severity, while clients with more serious delinquencies got live calls from debt collectors trying to convince them to pay up. Managers often made the decisions about how aggressive to be with each client in hopes of minimizing losses.

Researchers used data from millions of past interactions, tracing out how well different contact methods worked over many months for different types of customers. They created a computer model called PAYMENT that they believed could hone in on the best strategy to recover the most money from each type of client, depending on data points like his credit score, demographics, amount owed, and how long it had been since he last paid.

PAYMENT didn’t actually call anyone itself -- but it directed resources, deciding whether each client would get a taped message, a live call from an operator, or “no action.”

A low-risk client who misses two payments? Hold off on contacting her. A client with mixed credit history who hasn’t paid in three months and owes at least $750? Reach out with a live caller.

Debt collection managers, who prided themselves on going with their guts, set out to beat the computer. The humans were assigned some accounts to manage as they saw fit, and a different set were given over to the computer. After a few months, PAYMENT had opened a small but significant 7% lead in recovered debt. And the advantage was more like 9% when accounting for the fact that the computer saved money by recommending “no action” more of the time.

The inclusive credit card boom of the 1990s
Evolution of credit card possession and average debt levels for U.S. households by income quintile, 1989–2001. During this period, lower-income households opened credit card accounts in increasing numbers and multiplied their debt levels. Each gray curve represents twice as much aggregate debt as the one below it. All figures are adjusted for inflation to 2001 dollars. 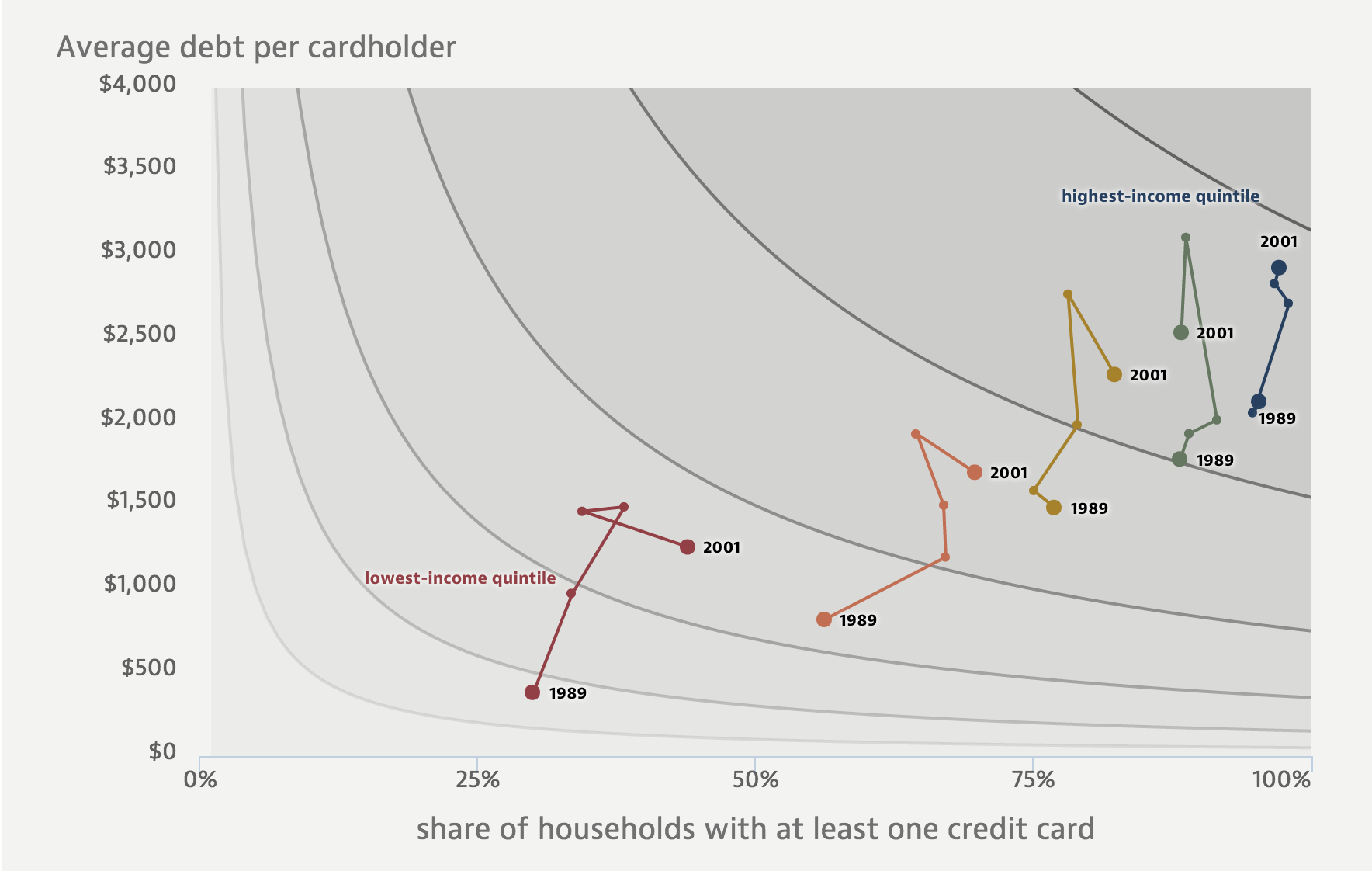 View full size chart
Source: Appendix B of Draut & Silva (2003) based on data from the Survey of Consumer Finances

The researchers realized that the potential savings across GE Capital’s many divisions would be gigantic. In 1990, the company’s debt collections division spent $150 million on a range of expenses – postage stamps, call centers, software, legal fees – and still only collected about 60% of its delinquent balances. If better targeting could improve collections efficiency by even just a couple percent, it would make for a huge windfall.

It also meant that unsecured lending to risky customers was a little less scary than it had been before. And that, according to a study appearing in this month’s issue of the American Economic Review, might explain what happened next.

Information technology and data-assisted decision making was already widespread in the banking sector in the late 1980s, but was mostly used for decisions at the front end of the credit process, like whether a potential borrower should be offered a mortgage or a credit card in the first place based on her risk profile.

If anything, this meant that borrowing should get less risky, if banks are better at weeding out credit risks. But as credit cards became increasingly common during the 1990s, more people with lower incomes were given accounts (see figure above) and the amount of debt creditors ended up writing off because they couldn’t collect — called “charge-offs”— grew. This is not what would be expected if lenders were using advanced algorithms to pinpoint risky customers.

Authors Lucasz Drozd and Ricardo Serrano-Padial argue that improvements in debt collection IT can help explain banks’ apparent eagerness to lend to riskier classes of customers.

For the most part, the predictive techniques already common in mortgage and loan decisions hadn’t made their way to the relative backwater of debt collections until GE Capital showed how profitable targeting could be. That changed the equation for banks who were eager to extend their profitable credit card lines to more and more customers, including customers with borderline credit.

The authors develop a model of credit card lending to simulate the adoption of IT and targeting algorithms by banks, including the effects they have on what kind of customers are offered credit cards in the first place and how much ends up in collections.

They find that if banks suddenly lost access to their improved debt collections technology in 2004, and had to resort to more indiscriminate strategies that were common in the ‘80s, charge-off rates would fall back close to the level from the early 1990s. This is because banks would significantly pull back on risky lending and go to greater lengths to prevent clients from entering collections at all.

Debt collections IT changed the equation for banks who were eager to extend their profitable credit card lines to more and more customers, including customers with borderline credit.

That’s not necessarily a good thing though. The model says that more efficient collections are good for almost everyone – banks who want to increase profit, risky consumers who want access to credit cards, and delinquent borrowers who have no hope of repayment and would prefer not to be bothered by collections agents.

The authors’ model makes basic assumptions, including that borrowers understand the risks and won’t borrow more than they can probably afford. But if people have self-control problems and borrow more than they should to satisfy short-term needs then banks’ decision to extend credit to more and more people could lead to widespread pain later.

And if credit card debt levels get too high, the entire economy is potentially at risk. Improved debt collections technology that makes banks less averse to risky lending might eventually contribute to a subprime credit card bubble.

Indeed, after lending to people with poor credit cooled off dramatically during the Great Recession, it is starting to tick up again. This is due in part to highly-refined, modern debt collection strategies that would put PAYMENT to shame.

Modeling the Revolving Revolution: The Debt Collection Channel appears in the March 2017 issue of the American Economic Review.

Does it matter if doctors or lawmakers accept small gifts from people trying to influence them?