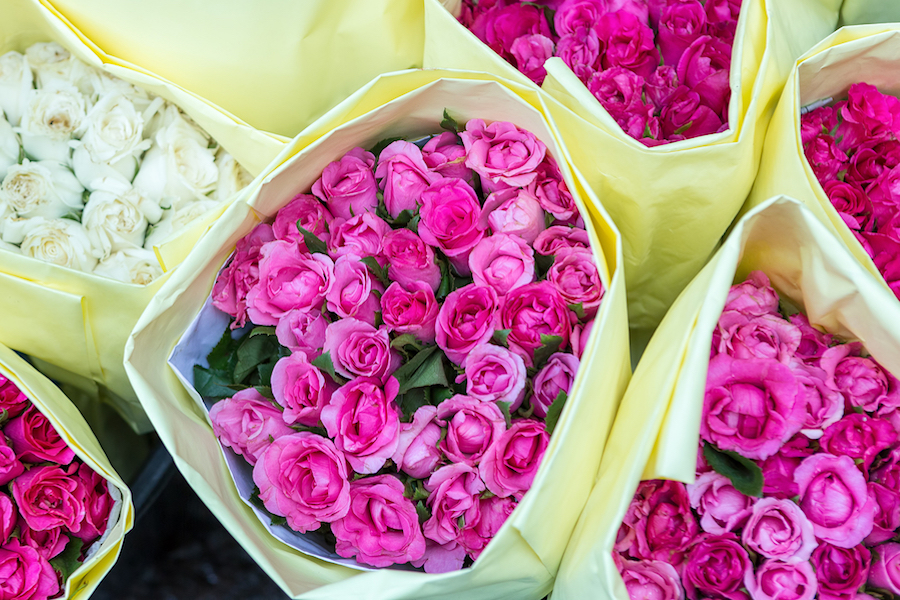 Roses displayed for sale at the Bangkok Flower Market in Bangkok, Thailand. In 2010, the Society of American Florists estimated that 200 million roses are produced and sold globally for the Valentine's Day holiday.

It’s said that all’s fair in love and war – and the same holds true in international rose markets. Especially this week, there is a need to get flowers to market at just the right time, and florists go to great lengths to find suppliers around the world who can be counted on to deliver.

It’s not easy, because suppliers in faraway countries who have agreed to sell roses at predetermined prices always face temptation to break their agreements and sell their roses at higher prices at auctions in Amsterdam. Or they can charge full price for wilted roses and claim they were fine when they were loaded on the plane 36 hours before.

Why are rose markets so cutthroat? Buyers and sellers are dispersed around the globe, with many suppliers in developing countries, so news of bad behavior doesn’t tend to travel that fast. Roses are easily perishable too, so it can be hard to prove in a court that any particular batch of roses arrived in bad condition.

It’s a market where contracts tend not to be worth much more than the paper they are printed on, and buyers usually have no recourse if they are jilted by their suppliers in the run-up to Valentine’s Day. A pair of economists thought this mistrustful environment might be a good place to measure the economic value of long-term relationships.

In a study that appeared in the American Economic Review in 2015, authors Rocco Macchiavello and Ameet Morjaria look at rose growers in Kenya, where horticulture is a major cash crop. Rose farms there tend to be small concerns that can only survive if they earn the trust of major buyers from overseas.

“What is clear is that these flower farms really really value their reputations in international markets,” said Morjaria, one of the authors of the paper, in an interview with the AEA. “They have a sense that they are small players, they really need to do their time and showcase to the world that this is a good place to do business.”

Without good contract enforcement, buyers are going to be hesitant to do a lot of business with an unknown flower farmer until he proves himself. Did the deliveries come on time, in the quantities ordered? Were the flowers of good quality?

It’s not as if you will be able to approach [an unknown rose supplier] and trust him and start that relationship quickly, because these relationships take time, they are not just going to blossom.

The authors find evidence that relationships do become more valuable over time, from the farmers’ point of view. For evidence, they look at direct sales records from Kenyan rose sellers 2004-08 and match them up to prices that were prevailing at the international flower auctions in Amsterdam at the same time as each sale.

In many cases, the roses that went directly to buyers sold for less than the flowers at the auction, meaning that the rose farmers were passing up an opportunity to make more money in order to maintain trust. By comparing the auction price from the direct sales prices, they create a measure of “temptation” – how much more money could a rose farm make if it reneged on its agreement and sold its flowers in Amsterdam instead?

If a rose farm sells roses to a florist in the U.S. for $10,000 during a high-demand period like Valentine’s Day or Mother’s Day when the same roses could have fetched $25,000 at auction, that is evidence that the seller values the buyer’s trust at $15,000 or more.

Using this method, the authors calculate that at any one time, the average rose exporter in Kenya has relationships with buyers overseas worth approximately $150,000 in total. For a typical small rose farm, these relationships might be among the most valuable things they own, and are treated as preciously as physical investments.

The authors also find that forgiveness can arise when business relationships have had time to mature. They study one particularly disruptive period in early 2008 when violence spread across parts of the country in the wake of a contested election.

This was a tragic episode that set back democratic consolidation and left dozens dead, but it was also a moderate inconvenience for flower merchants in the developed world who were counting on deliveries of flowers for sale in mid-February. Very few rose farms were directly affected by the violence, says Morjaria, but many workers were impacted and farms found themselves short-staffed during the crucial part of the season.

Who will end up without a rose on Valentine's Day?
Relative reliability for rose exporters in Kenya during post-election violence in 2008. Each point represents one buyer-seller relationship. Farms affected by violence (red points) seemed to prioritize middle-aged relationships at the expense of very new and very old relationships. The authors' hypothesis is that sellers felt their oldest relationships could better survive a one-time lapse. 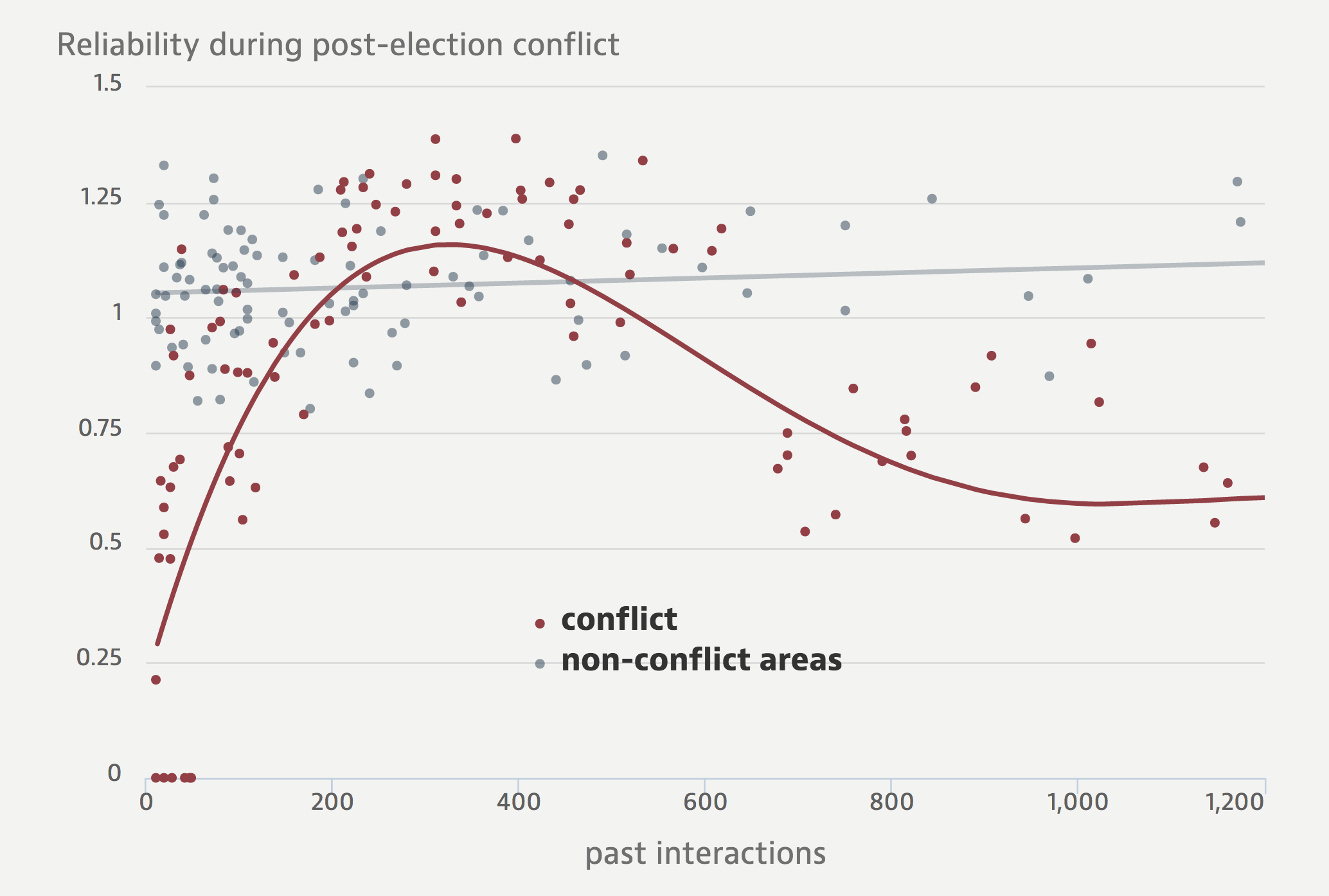 Sellers who were committed to delivering thousands of stems to multiple buyers knew they wouldn’t be able to please everyone, so they had to make tough decisions about which buyers to alienate.

The researchers tallied up deliveries during this period and found an interesting pattern. Flower farms affected by violence seemed to favor buyers with whom they had moderate, but not long-standing, relationships (see figure above).

Apparently, the farmers were counting on their long-time partners to be more understanding, while trying to make sure their newer, more fragile relationships didn’t fall apart. A relatively new business partner might just give up on a flower farm if it failed to come through during the busy season, but a buyer who has a long history with a flower farm wouldn’t necessarily want to have to start over after one missed delivery during a very difficult time.

“After the violence, there was a lot of anxiety over whether the Kenyan flower industry would come back to where it was,” says Morjaria, and farmers were eager to show visiting representatives from overseas that their farms had weathered the storm. Ultimately, the industry bounced back quickly and returned to previous sales volumes the next season.

This illustrates that relationships have value to buyers too – once they find sellers they trust, they want to keep ordering from them and don’t want to have to hunt around for new, untested rose farmers. As Morjaria put it: “these relationships take time, they are not just going to blossom.”

The Value of Relationships: Evidence from a Supply Shock to Kenyan Rose Exports appears in the September 2015 issue of the American Economic Review.

Are credit histories too revealing?

The merits of making lenders "forget" past transgressions