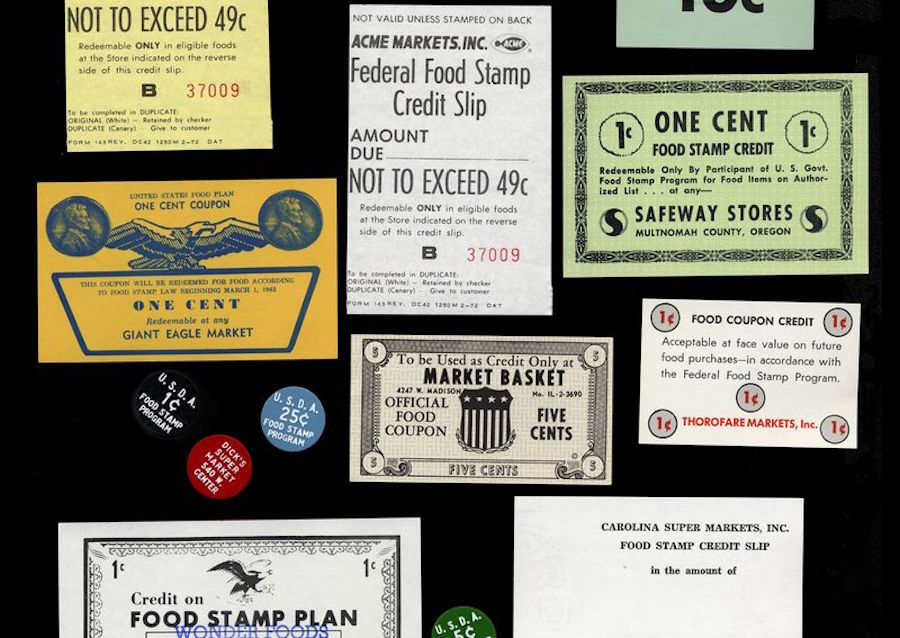 A collection of grocer coupons dating back to the early days of the Food Stamp Program in the U.S. Today, food stamp benefits are dispensed electronically through EBT cards.

As World War II was drawing to a close in the winter of 1944-45, Nazi troops erected a blockade that left part of the Netherlands cut off from food supplies. A developed country that hadn’t seen a true food shortage in at least a century was suddenly plunged into a deep famine that would claim thousands of lives before the region was liberated by advancing Allied troops months later.

The Dutch “hunger winter” left behind a painful legacy – not only thousands dead, but a cohort of unlucky babies born to mothers who had been on the brink of starvation during their pregnancies.

These babies grew up in the relative affluence of post-war western Europe, never coming close to experiencing an actual famine themselves, but decades later it became apparent that the hunger winter had taken a toll on this group. Researchers would discover that Dutch adults who were in utero during the famine suffered higher rates of obesity, heart disease, and schizophrenia than slightly-younger babies who had narrowly avoided the same fate.

A better understanding of the importance of fetal health (and the possibility that epigenetic changes during gestation can have big effects later in life) has inspired a growing literature about the connection between childhood adversity and adult economic outcomes.

This may be key to understanding the tight correlation in health and income levels between parents and children, and suggests a promising avenue to increasing economic mobility: making sure all parents have the resources to care for their children during infancy and even before birth. An article appearing in this month’s issue of the American Economic Reviewlooks to see if the introduction of the U.S. Food Stamp Program had just such an effect.

They note that it impacts more U.S. families than any part of the social safety net save Social Security and dispenses more money than the main welfare program TANF or the earned income tax credit for the working poor. However, the program is relatively uniform across states and hasn’t changed much since its inception, so economists have had few opportunities to compare populations with different food stamp access.

To try to measure the causal impact of nutrition assistance, the authors look back to the earliest years of the Food Stamp Program (FSP) as it was being rolled out across different counties over a period of 13 years in the 1960s and ‘70s. They draw on historically-linked data from the PSID to look for a connection between growing up with more years of exposure to FSP during this rollout period and better outcomes in later life.

Some linkages between early life nutrition and later life outcomes are fairly intuitive. For example, severely undernourished children may suffer from anemia and listlessness. This may reduce their ability to invest in learning during childhood and may harm their long-run earnings and other outcomes. [Vitamin D deficiency leads to rickets] which causes weakening of bones in children and leads to stunting of growth, skeletal deformities, and other long-term poor health outcomes.

The FSP was created in 1960, but counties had until 1975 to adopt the program and phase out other forms of assistance. The authors explain that adoption in many counties was accelerated or delayed by political interests like the farm lobby and advocates for the poor.

This means the rollout was not exactly random across different counties. Even so, earlier work by two of the authors shows that county characteristics like the poverty level, racial makeup, and agricultural presence are not significantly correlated with the time it took for a county to join the program. This means that if one county started dispensing food stamps in 1963 and a similar-looking county (with similar demographics and income levels) did not receive food stamps until 1973, the authors can treat this as a natural experiment.

The authors’ approach allows them to determine if the people who grew up in counties that piloted the FSP earlier in the 1960s grew up any healthier than those who didn’t, and more generally if people who spent more years of early childhood in a FSP-covered county had better adult outcomes.

The researchers can’t determine exactly which families were receiving food stamps during this period, but they know when each county began participating in the program and where each family was living each year. They use this to determine how early in life each individual in their sample was “exposed” to food stamps and focus on a subset of families with very low parental education that were most likely to have enrolled in the program.

To test the effect of the program on beneficiaries living in these counties, the authors look to data from the same people in adulthood and track several health and economic outcomes like obesity, diabetes, blood pressure, employment, adult food stamp receipt, and adult welfare receipt. They boil these down into two summary measures, metabolic syndrome and economic self-sufficiency, and assign each person a score for each based on their later-life outcomes.

The authors find that food stamp exposure on children from the time they are in utero to age 5 significantly decreases the chances of metabolic syndrome and improves the chances economic self-sufficiency later in life, although the results diverge widely by gender. The effects on health outcomes were stronger for men, while the effects on economic self-sufficiency were much stronger for women.

Accessing the social safety net while still in the womb
The effect of initial exposure to the Food Stamp Program on metabolic syndrome (a cluster of conditions like diabetes and high blood pressure) and economic self-sufficiency (as defined by factors like employment and welfare receipt) in adulthood. Exposure before age 5 had the biggest impact, and people with exposure in utero had better outcomes than people who were merely exposed in infancy and later childhood.
Source: adapted from Figure 3 and Figure 4 of Hoynes et al. (2016)

Better nutrition for infants is probably a big part of the story, although the authors emphasize that FSP may have had broader effects. For many poor families, access to FSP represents a huge increase in overall disposable income, and funds that previously were set aside for groceries are now freed up for other uses. Recent research shows that increases in disposable income can result in benefits for maternal health like lower stress and lower cortisol levels, which probably has beneficial effects on fetal and infant health as well.

The authors’ findings also imply that the adults who benefited from food stamps in the 1960s are relying less heavily on the social safety net today, with fewer health problems, less welfare use, and higher incomes. This means that the money invested in young food stamp recipients during the 1960s and 1970s is still reaping benefits for taxpayers today.

The authors don’t set out to quantify the savings from the Food Stamp Program, but one recent study estimated that young Medicaid beneficiaries eventually pay back (with interest) about half of the Medicaid dollars spent on their behalf in the form of higher taxes by the time they turn 60. A similar calculation for food stamps might lead policymakers to reevaluate the true cost of the SNAP program. ♦

"Long-Run Impacts of Childhood Access to the Safety Net" appears in the April 2016 issue of the American Economic Review.

Better information can make a big difference for patients