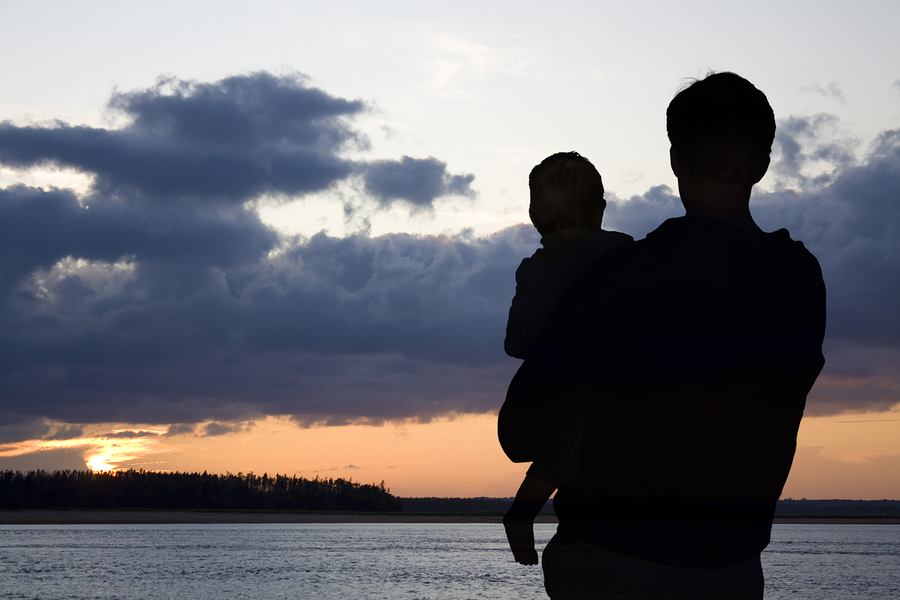 Making it easier for dads to voluntarily sign up for legal paternity doesn't mean that it will necessarily improve life for the child.

What’s the best way to encourage more single fathers to support their children?

Policymakers concerned with the issue have focused on making it easier for unmarried dads to establish legal paternity. The theory is that if they can convince more of these men to sign on the dotted line that says they are the father, then those dads will be more likely to step up and care for their kids.

But just because more fathers acknowledge their legal responsibility doesn’t mean that life will improve for the child.

A law that made it easier for single dads to gain rights and responsibilities to their biological children had barely any impact on American children’s physical or mental health, nor did it do much to change their overall financial security, according to a paper published in the April issue of American Economic Journal: Applied Economics.

The findings counter some widespread assumptions about how to address the problem of deadbeat dads and improve the situations for children being raised by single-mothers.

“We have to think more carefully, not just about how do we address the issue of these kids being in a single-parent household...but thinking about how do we get these parents more involved in the first place,” said the paper’s author Maya Rossin-Slater, an assistant professor of economics at the University of California at Santa Barbara, in an interview with the AEA.

More than 40 percent of children in the United States are born out of wedlock. Many of those kids are left to be raised by their mother without paternal support of any kind, putting them at greater risk to be raised in poverty and all the health and social problems associated with it.

The issue isn’t going away, as Americans increasingly are delaying marriage or forgoing it altogether, making paternal investment in child welfare a growing concern for public health officials and state assistance programs.

The traditional two-parent household has declined dramatically in the past half-century. Fewer than half of all U.S. kids today are living in a home with two parents in their first marriage; this is down from 73 percent in 1960.

We have to think more carefully, not just about how do we address the issue of these kids being in a single-parent household...but thinking about how do we get these parents more involved in the first place.

While children can thrive in single-parent households, many struggle to overcome the disadvantages associated with having only one parent — typically the mother — involved in their daily lives. They are more likely to live below the poverty line, have poorer health, and exhibit behavioral issues.

It’s not just a matter of concern for public health. State policymakers have sought ways to encourage unmarried fathers to share in the burden for raising children born out of wedlock, reasoning that the father’s financial contributions will result in fewer families on public assistance.

One approach has been to make it easier on unmarried fathers to sign up for legal paternity when the child is born. States all across the nation have adopted a program in which unmarried fathers can voluntarily sign a simple one-page form at the hospital that gives them partial rights and responsibilities for their child. These programs were gradually adopted by states over the 1990s, making it much easier to establish paternity, which before was a costly and complicated process often involving the court system and DNA testing.

No DNA test needed
In the 1990s, states began allowing unmarried fathers to declare paternity at the hospital when a child was born. Many places saw an immediate impact, with paternity rates increasing. The chart below shows the ratio of paternity establishments to new births for states that enacted the policy in 1995 and 1999, periods that are marked by the triangles. (Note: paternity establishments include fathers of children up to 18 years old.) 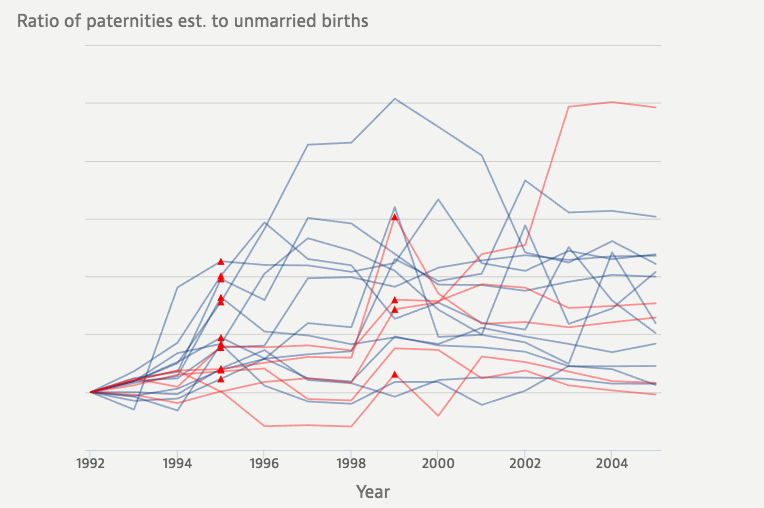 Rossin-Slater used data from the US Census Bureau and Centers for Disease Control and Prevention to examine the change in parental relationships and child health since the program was created.

Indeed, by one measure she found the program to be a resounding success: Paternity establishment rates shot up by 21 percentage points, but it came at a cost. For some parents who were unwed at childbirth, marriage rates post-childbirth actually declined.

That’s not to say that remaining unmarried, in itself, was bad for the child. But it did make it less likely that the father would live with the child in the home and showed no effect on their involvement. By one measure, it went down.

There was a slight decline in children’s private health insurance coverage for children of fathers who might otherwise have chosen to get married to their children’s mothers. Paternity establishment offered parents an alternative legal relationship option to marriage. So, some dads opted out of marriage, which reduced the chances of putting the kid on the dad’s health insurance while compelling the mother to spend more time at work in order to compensate for the gap in health coverage and income.

Meanwhile, there is no overall impact on income, poverty status, or welfare benefit.

It’s not like reducing the barriers is necessarily a bad thing. On the surface, it seems logical — make it easier for the parents to declare who the father is. But it is largely ineffective at achieving the lawmakers’ objective of improving child well-being and reducing dependency on welfare programs, Rossin-Slater said.

The lesson for policymakers is to give families more flexibility to shape their parental arrangements and, at the same time, shift their focus to why many people choose to have children outside marriage, and how to address the needs of children in these families regardless of the parental relationship status.

“Focusing on encouraging fathers to be more involved...what are the causes and factors that lead to children being born in single parent household rather than two parent household and how can we address those factors,” she said.

Will they flourish in the labor market without government support?