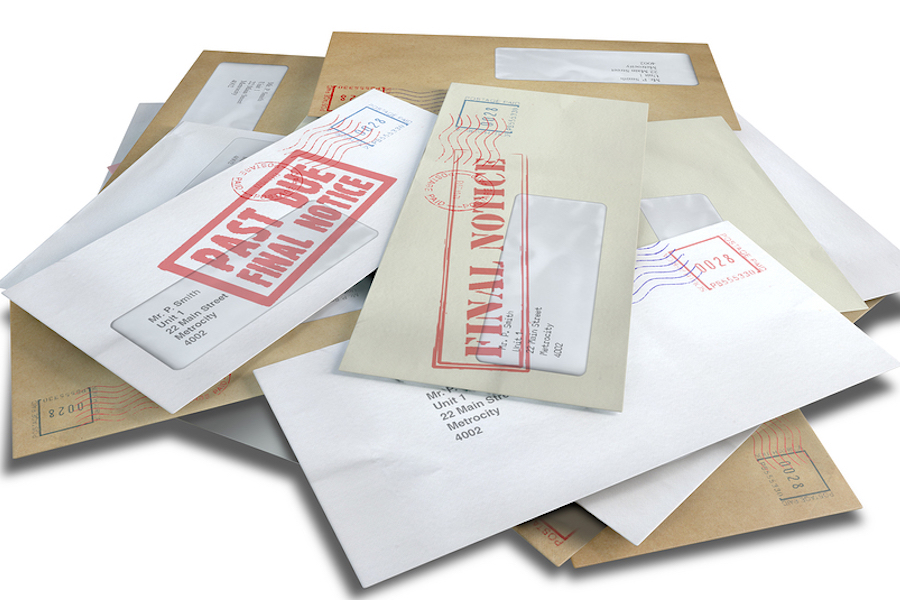 The authors measure the impact of a 2006 health insurance expansion in Massachusetts on outcomes like bills past due and bankruptcy declarations.

The Affordable Care Act is credited with adding millions to the health insurance rolls in the United States, but recent developments have called the health of the law into question. Several insurers including Aetna announced plans to leave the public health insurance exchanges in some states next year, leaving many state exchanges with fewer options for consumers and at least one Arizona county with none at all.

How big of a deal is this for enrollees on the health insurance exchanges? There’s a debate over how large an effect health insurance has on physical and mental health, but in principle one of the main benefits of health insurance is protecting against financial losses. A new study appearing in this month’s issue of the American Economic Journal: Economic Policy looks to the Massachusetts health reform in 2006 that foreshadowed the ACA to see how health insurance expansions affect financial health.

In The Effects of the Massachusetts Health Reform on Household Financial Distress (PDF), authors Bhashkar Mazumder and Sarah Miller note that the impact of health insurance on household finances is underexplored, even though that may be one of the main channels through which subsidized health insurance improves people’s lives.

Financial headaches stemming from medical bills afflict a large share of Americans. There’s some debate about how big a role medical debt plays in bankruptcy overall, but research indicates that a decent portion of the population has trouble paying for health care. A 2015 survey found that 26% of Americans reported that health care costs caused them serious financial problems within the last two years (see figure below).

Health insurance doesn’t provide blanket protection either (another survey found 20% of those with insurance had problems paying medical bills in the last year), but it can reduce the chances that a health shock like a heart attack, herniated disk, or new diabetes diagnosis turns into a financial calamity.

Medical bills can lead to financially precarious situations
Responses from a 2015 survey of U.S. adults about their health care experiences. Respondents who reported that health care costs had caused them serious financial problems within the past two years were asked if any of these seven situations had occured as a result. Percentages listed are as a share of the total adult population, including both the insured and uninsured. 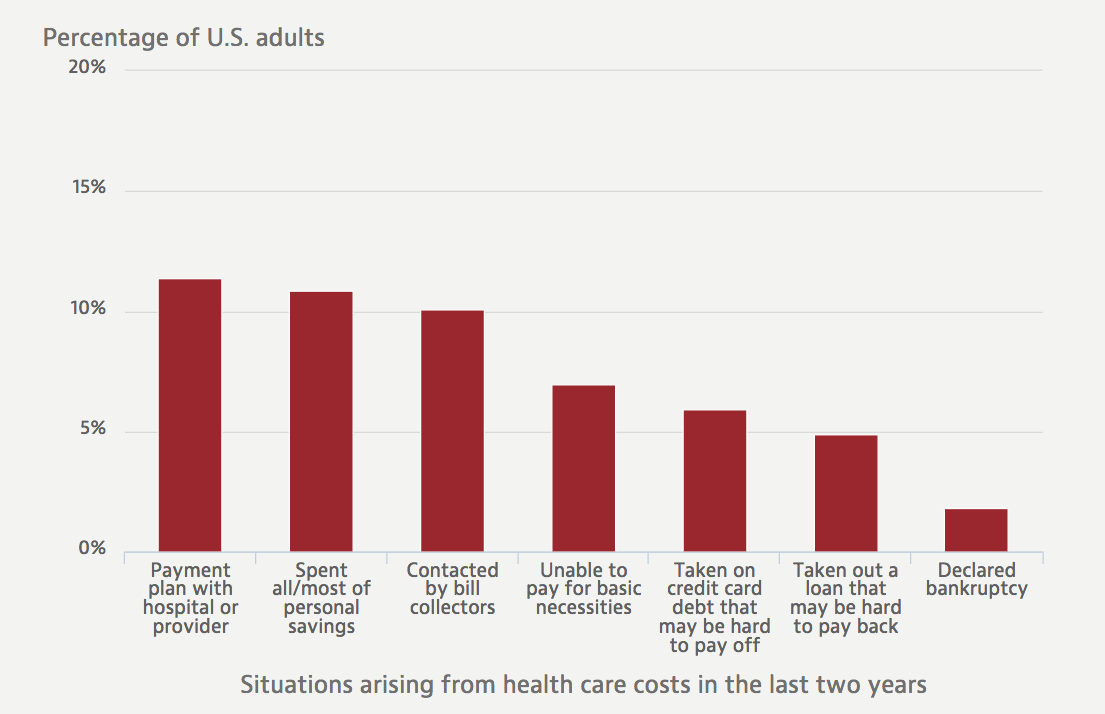 Some studies have looked at the effect of insurance on financial distress, including the closely-watched Oregon Medicaid experiment that tracked the results of a lottery for Medicaid coverage. A comparison of lottery winners and losers found little direct evidence of Medicaid benefiting the health of patients, with the exception of a marked improvement in rates of depression. But they did find financial benefits: lottery winners had less out-of-pocket expenses, fewer catastrophic payments that exceeded 30% of income, and were less likely to have medical debt.

Even so, this evidence is limited to a population entirely below the poverty line, who might be especially likely to benefit from free Medicaid coverage. Mazumder and Miller note that about 70% of those who gained insurance as a result of the Massachusetts health reform in 2006 – which offered subsidized health insurance to all and required everyone to sign up for insurance or pay a penalty – were above the poverty line. This is similar to the ratio for those newly insured under the Affordable Care Act, which was partially based on the Massachusetts reform.

To evaluate the impact of Massachusetts health reform on financial distress across a broader population, the authors use a national dataset of credit reports compiled by the Federal Reserve Bank of New York. The reports allow the authors to see financial details like total debt, debt that is past due and being pursued by collectors, and even bankruptcy filings for people across the country and over time.

The authors’ credit records are anonymized and can’t be linked to actual individuals' health insurance status, which would be ideal for measuring the effect of insurance. Instead, the authors look at how the Massachusetts law was likely to impact some people in certain counties and age cohorts more than others.

They highlight the contrast between Suffolk County (Boston), where about a quarter of the adult population under age 40 was uninsured before the law went into effect, with middle-class Bristol County on the Rhode Island border, where uninsurance rates were much lower (around 8 percent for ages 40-64). The law, which required everyone to take up insurance, stood to have a much greater impact on adults under 40 living in Boston than middle-age people living in Bristol County.

The authors’ hypothesis is that the financial health of those in high-impact groups is affected more after the passage of the law in 2006, but not before the law, and not in other New England states. That would be evidence that the health reform specifically is having an impact of financial distress. So the authors are looking to see if financial distress decreases for people in Suffolk County more so than in Bristol County on average, even though they can’t determine which specific people may or may not have gained insurance as a result of the law.

The authors find that this is indeed the case: counties and age groups with lower insurance rates saw significantly bigger reductions in total debt, total amount past due, the percent of debt past due, and bankruptcy. Smaller differences in credit scores and debt in collections were not statistically significant, but the bulk of the evidence suggests that the Massachusetts reform alleviated financial distress for some of the newly covered.

The differences are particularly stark when the authors focus on larger delinquencies. The effect in Massachusetts seemed to be concentrated on the largest debts past due – debts greater than $5,000 or $10,000. These fell more quickly after the reform among groups with high uninsurance, while smaller debts past due didn’t seem to fall or actually rose slightly.

The authors don’t find a corresponding pattern in other New England states: financial distress didn’t evolve differently in high-uninsurance and low-uninsurance counties after 2006 in Connecticut or New Hampshire the way it did in Massachusetts. This is strong evidence that these changes really reflect the impact of the law, and not some other economic trend that benefited people living in areas with poor health insurance coverage.

Massachusetts is unusual in a lot of ways, so we can’t necessarily extrapolate these results to predict the impact of the Affordable Care Act rollout on financial distress.

Massachusetts already had a relatively high rate of health insurance and the largest number of doctors per capita of any state, so the new law might have provided less of a disruptive shock to the system than a similar law would have had in Texas or Georgia (with many more uninsured people and fewer doctors to absorb new patients).

In addition, Massachusetts had a pre-existing program that covered emergency room bills for some uninsured people, so there may have been less risk of medical debt and bankruptcy in the first place.

“The Effects of the Massachusetts Health Reform on Household Financial Distress” appears in the August 2016 issue of the American Economic Journal: Economic Policy.