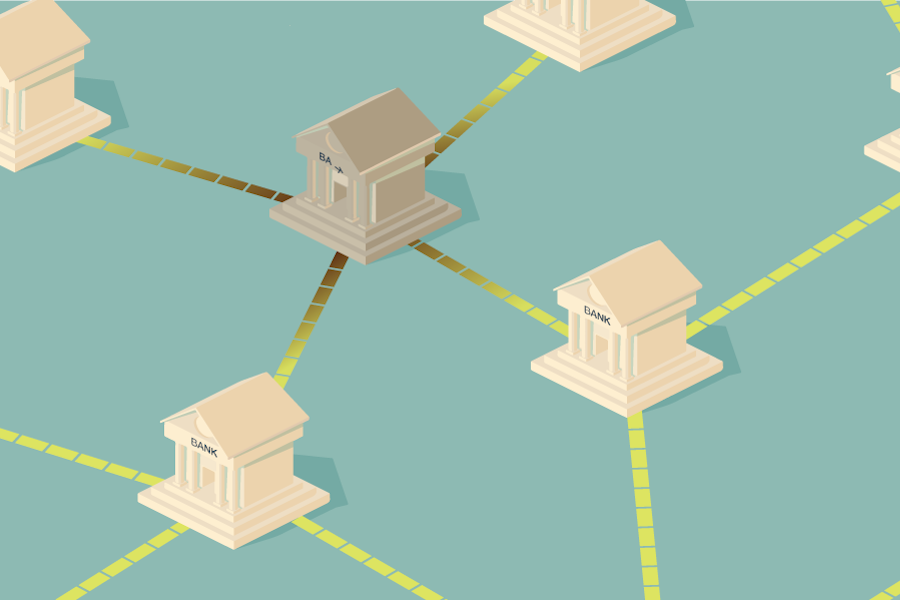 Illustration by Gian Romagnoli and Tim Hyde, images from OnBlast/Bigstock

Eight years ago this week, Congress was debating the size and scope of a $700 billion bank bailout designed to contain the damage from a spreading financial crisis that threatened to bring down major financial institutions.

This week, financial markets fretted over the tenuous position of Deutsche Bank, which is facing a large settlement with the U.S. Justice Department that might necessitate liquidating some of its assets and could lead some traders to doubt the bank’s stability. This could potentially put pressure on other banks and institutions just as the failure of AIG and Lehman Brothers did in the summer and fall of 2008.

In the intervening time, financial markets have gotten used to living with the idea of “systemic risk” and the threat of a financial crisis that can spread between banks like a contagious disease. The crisis in 2008 prompted some self-reflection among financial experts who discounted the risk of a global financial meltdown, and a flurry of new research on the effects of growing bank interconnectedness. A survey in the current issue of the Journal of Economic Literature highlights recent research on the perils of financial contagion.

In Contagion in Financial Networks (PDF), authors Paul Glasserman and H. Peyton Young describe a tension between two notions: dense financial networks are good because they allows banks to prop each other up and share risk, but they are vulnerable because a default at one bank can spread throughout the system.

The [2007-08 financial] crisis exposed the fact that regulators and market participants had very limited information about the network of obligations between financial institutions. It also revealed that there was little theoretical understanding of the relationship between interconnectedness and financial stability.

At some level, banks need to form connections to do what they do. Ultimately the service they provide is connecting borrowers and investors and transferring risk between parties or companies, so banks wouldn’t be very useful if they couldn’t transact with each other.

In practice, banks tend to borrow from and lend to one another to bridge the gap between short-term borrowers and long-term lenders, share the risk of lending to people or companies that may not pay them back, or hedge against big changes in exchange rates or commodity prices. This protects banks from going broke if there is a downturn in one region of the country or a collapse in a specific industry.

But this can lead to disaster if one bank suffers a big enough shock, like the bankruptcy of a company that owes millions or a rush of customers looking to withdraw their deposits all at once. This might require that bank to shore up its position by calling in its loans to other banks, who then face the same problem and must turn around to call in their loans.

The funding run can reverberate across the network and lead to widespread defaults when, in a less densely connected system, only one bank would have gone under. The real-life example of AIG, a huge U.S. financial institution that sold insurance products to large banks, illustrated this problem in stark relief during the summer of 2008.

Major Wall Street banks had paid AIG for insurance that would pay out if certain assets lost value. When subprime mortgages started to default en masse and assets based on those mortgages were destroyed, AIG was on the hook for more payments to other banks than it ever expected. It became apparent that AIG couldn’t afford to fulfill its insurance to other banks at just the moment when it was most needed. The U.S. government stepped in and essentially took over the company, offering payments owed to other banks so that they wouldn’t start to topple.

Compounding the problem was that investors and regulators alike didn’t have a clear picture of who was connected to AIG and how much they were owed; there is no national registry of bank connections that government regulations and the public can inspect for impending trouble. This also compromises the efforts of economists who want to study the role of financial connections and assess the risk of financial contagion.

Earlier theoretical models focused on simple network configurations, like “rings” where each bank lends to exactly one other bank and borrows from exactly one other bank, and “complete networks” where every bank transacts with every other. These simple network shapes allowed researchers to fully understand how banks would react to outside events and the actions of other banks, and allowed them to compare the stability of different networks under different scenarios.

But real-life financial networks are much more complex. Research using bank loan data from Austria, Mexico, and Brazil has shown that some banks within a network will be more intimately connected than others, with the ones with the most connections often borrowing more than they lend.

Studies of interbank loans in Germany and the Netherlands show a “core-periphery” structure, where certain banks are much more connected and central, while some other banks are less connected and less important to the overall system. Worryingly, the more connected banks (which posed the most risk to the system as a whole) tended to have less capital in reserve.

A new wave of research has started using the tools of network analysis to understand these more complicated networks and try to make quantitative statements about the point at which networks become too dense and their connections start making the system as a whole weaker rather than stronger.

Too central to fail?
Network analysis of 12 global financial institutions that received the most emergency loans from the Fed during the financial crisis. Battiston et al. (2012) develop a measure of systemic risk called "DebtRank" that reflects how vulnerable the entire banking system is to each bank's fragility. They find that even banks that took only a moderate amount of loans (lighter shades of blue) could be systematically important if they were sufficiently connected to other banks. 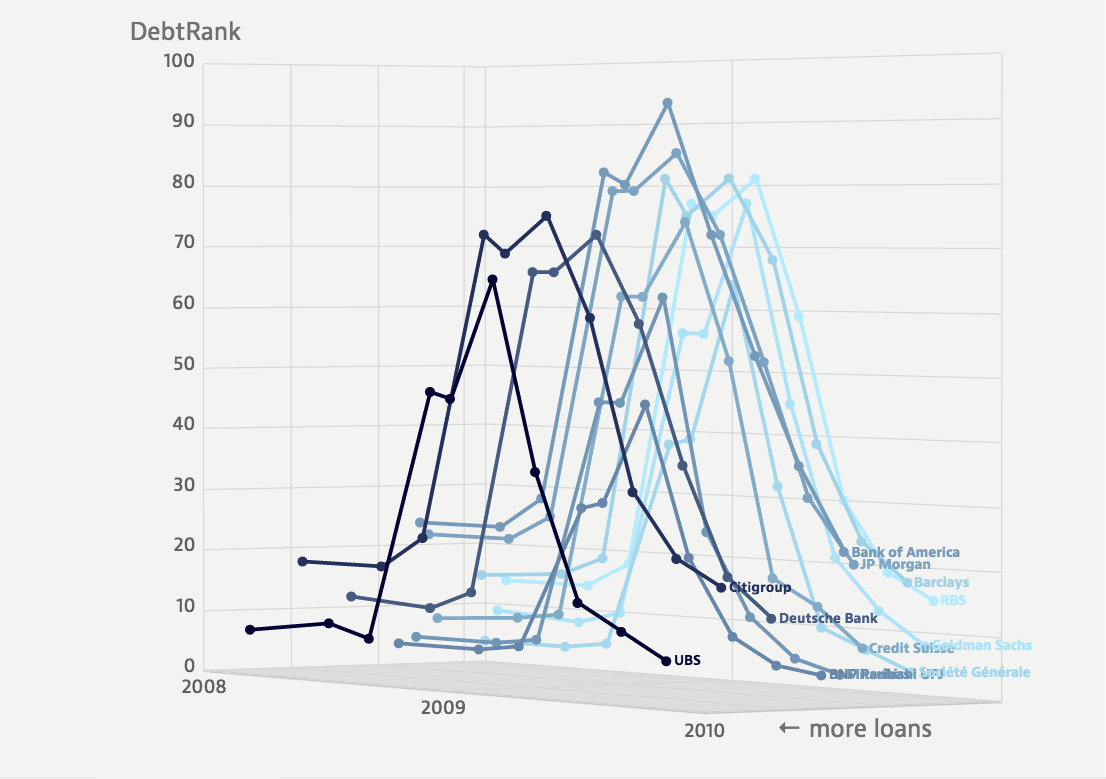 Others have focused on trying to quantify the connectedness of complicated real-life bank networks, analyzing network connections to show which banks are more central and which systems are more vulnerable to a small number of banks.

Research based on bank loan data from the U.S. and Mexico has shown that the most connected banks aren’t necessarily the largest ones (see figure above), but also that bank connectedness is not linked with default risk in an obvious way. Networks with denser connections might experience more severe crises but less frequently, and networks with very dense connections might actually be safer than moderately-connected networks.

This empirical work is severely constrained by the opacity of financial networks. Most research is based on limited data that is analyzed long after the fact; banks understandably aren’t willing to share voluminous information about their exact connections to other banks until after those debts are resolved.

This problem of incomplete information also might exacerbate financial contagion if market participants don’t realize how connected banks actually are and assume the worst.

It also hamstrings regulators who want to ward off financial meltdowns and might be aided by measures of which banks are becoming more central to the network and presenting more systemic risk. One recent study proposed making financial networks stronger by having more stringent capital requirements for the most connected banks. This is difficult to implement in practice because regulators don’t know which banks are most at risk in real time, but this may be a hint of how we can eventually use this research to help avert future crises. ♦

"Contagion in Financial Networks" appears in the September 2016 issue of the Journal of Economic Literature.