An economic understanding of the domino effect 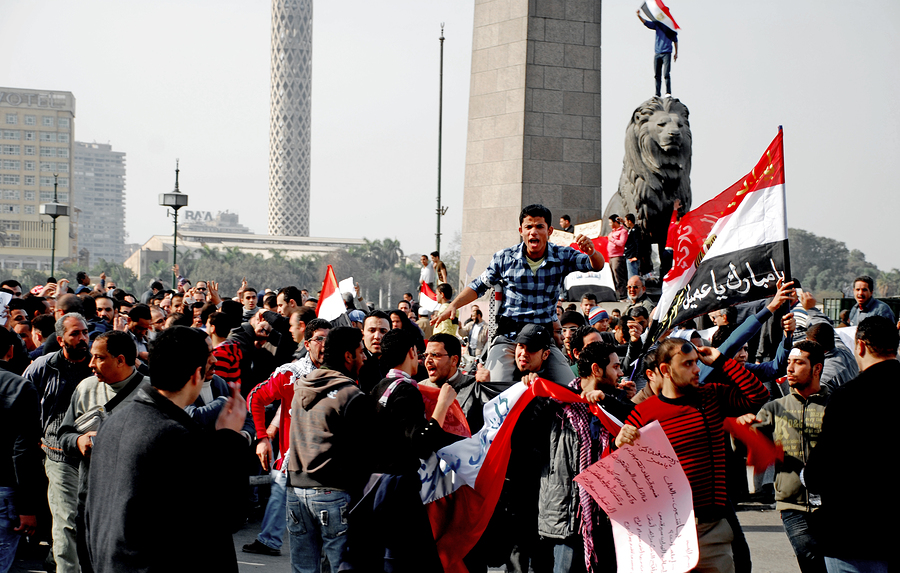 Protesters marching toward Tahrir Square in Cairo, Egypt on February 1, 2011. A spate of protests rocked the the Arab world in late 2010 and early 2011 after a street vendor immolated himself in Tunisia in protest of police harassment.

Five years ago, street protests were spreading across the Middle East, toppling regimes and inspiring demonstrations in cities as far away as Beijing and New York. In the intervening time the region has certainly seen ongoing turmoil, from the civil war in Syria to a recent flareup in tensions between Saudi Arabia and Iran, but few new mass movements in the style of the Arab Spring uprisings.

Political scientists and economists have struggled to understand why crises like political revolution seem to be able to spread across borders and markets and why these contagious outbursts tend to burn out just as quickly as they arise. Indeed, most mass-movement political revolutions in the last 50 years have fit neatly into just three clusters: the collapse of the Soviet Union, the "color revolutions" of the early 2000s, and the Arab Spring.

The domino effect is usually ascribed to psychological forces that overtake calm, rational deliberation – a bank run sends investors into a panicked frenzy, or the toppling of a repressive regime fills the opposition movement in another country with revolutionary zeal. But could there be an underlying economic logic to crisis contagion? An article appearing in this month's issue of the American Economic Journal: Microeconomics applies a game theoretical approach to the question of behavior in a crisis.

In Falling Dominoes: A Theory of Rare Events and Crisis Contagion (PDF), authors Heng Chen and Wing Suen note that many phenomena fit the same pattern as mass movement revolutions: rare events that tend to come in pronounced but infrequent waves. Speculative currency attacks and financial crises, for instance, exhibit these same features and have been noted for their ability to spread between distant countries with little apparent connection.

Past economic understanding of crisis contagion has focused on models with multiple equilibria where markets suddenly flip from a calm state to a crisis state. These models show that extreme actions in a crisis are not necessarily "irrational" for market participants, but they can’t explain what actually catalyzes markets to flip from one equilibrium to another, or how one crisis can spawn another.

The authors propose a new model to explain crisis contagion as the result of an information cascade. In their telling, crises can spread around the world very quickly because they shift beliefs about what is possible.

Currency crises: when it rains, it pours
Speculative attacks on currencies that were part of the European Exchange Rate Mechanism, 1979-1992. The attacks appear in bunches with long stretches of tranquility in between. A similar pattern has been observed for other crisis phenomena ranging from political revolutions to bank runs.
Source: crisis list and crisis magnitude definition from Eichengreen et al. (1996)

Consider the case of political revolution: opposition movements in countries around the world are considering taking to the streets, while unstable governments are considering the best way to consolidate power and forestall revolution. Their choices and strategies are dictated in part by their resources and knowledge of the other side's organization, but also by their subjective beliefs about just how easy is it to overthrow the regime in power.

One vision of the world is tranquil: the powers that be have effective ways of maintaining control over the military and press, and opposition movements have little hope of unseating entrenched governments. Another vision of the world is frenetic: tyrannical regimes are only hanging on by a thread, vulnerable to internal dissention or military coups, and are likely to flounder in the face of massive public protests.

The authors suppose the world is in fact tranquil and that most people (insurgents and ruling powers alike) believe it to be so with near certainty. This means that most revolutions aren't even attempted, and the few that are likely meet with failure.

But what happens every so often when a government is actually overthrown? In the authors' model, insurgents planning a political revolution are coldly calculating the odds of success and only mount a challenge at the most opportune time. A successful revolution has a galvanizing effect not because it is “inspiring” but because it radically changes perceptions about the fundamental nature of revolution. Perhaps we do not live in a tranquil world, but a frenetic one after all?

Once this new thinking takes hold, it affects the posture of both insurgents and incumbent regimes. Insurgents begin to believe that political revolution is more attainable, and the regime in power begins to doubt whether it is even worth it, in a frenetic world, to try to defend itself or whether to flee to asylum in another country. In this way, an unlikely success in one country leads to more attempts at revolution and more successes: the domino effect in action.

Our model offers an interpretation of the revolution wave of the Arab Spring: the unexpected success in Tunisia triggered a large shift in the belief on the revolution technology, which caused citizens to become more aggressive and some of the ruling elites to lose their will to suppress civilian uprisings, and therefore ushered in a sequence of revolutions.

However, the authors assume that the world really was tranquil all along, so the surge in revolutions will eventually run into the reality that overthrowing a regime in power is a uphill battle. After many attempted revolutions are repulsed, everyone’s faith in a tranquil world is restored and insurgents become much less aggressive. The wave of attacks is over.

The authors emphasize that this model is broadly applicable outside the context of political revolution. The key is that a phenomenon must be quite rare, so that the lone early success has a huge impact on people’s beliefs. If revolutions were relatively commonplace to begin with, a single successful revolution wouldn't galvanize anyone or make anyone doubt their fundamental assumptions about the world. The fact that successes are so rare is what gives people such pause when the occasional revolution does succeed.

The information cascade model can’t be used to understand every type of crisis, though. The authors note the case of the September 11 attacks, which shattered perceptions that the U.S. aviation system was invulnerable to terrorist infiltration. In theory that event could have spurred a frenzy of follow-up assaults if it made it seem like an attack was easy to pull off, but the U.S. government responded aggressively with strict new security measures and there was no wave of aviation terrorist attacks in the years that followed. In this case, the actions of those trying to combat the crisis did not reinforce the cycle. ♦

“Falling Dominoes: A Theory of Rare Events and Crisis Contagion" appears in the February 2016 issue of the American Economic Journal: Microeconomics.